ABU DHABI ― Officials from the United Arab Emirates’ capital outlined their plans to promote the use of clean energy at the 4th World Future Energy Summit Tuesday.

The country which produces 8 percent of the world’s crude oil supply is working on establishing a green urban area named Masdar City by 2025. Masdar means “source” in Arabic.

The venue, which is being developed by state-run Masdar ― also known as Abu Dhabi Future Energy Company ― is expected to rely solely on clean energy sources such as solar and wind power, and generate no waste or carbon emissions, the firm said.

Such initiatives are in line with the “Abu Dhabi Economic Vision 2030,” which was declared by the government in 2009.

Under this long-term vision, the state seeks to become a knowledge-based economy by diversifying and significantly raising the non-oil sector’s contribution by 2030.

A key part of the plan is boosting the use of alternative energy sources such as solar energy and nuclear power. Abu Dhabi intends to increase the use of renewable energy to 7 percent by 2030, according to the government.

Whereas the country’s commitment to alternative energy may seem surprising to some, Masdar said it is based on a clear purpose ― the good of the future.

“Not only will fossil fuels run out eventually, we are also trying to benefit the rest of the world (through alternative energy initiatives) for tomorrow. UAE has historically been a major energy supplier and aims to continue to do so in the future as well,” Masdar officials told reporters.

Launched in 2006, the energy firm has been at the forefront of leading the drive, working on multiple projects through its five different business units.

The five units ― Masdar Institute of Science and Technology, Masdar Capital, Masdar Power, Masdar Carbon and Masdar City ― have together been taking a holistic approach to the goal, said Dale Rollins, the firm’s chief operating officer.

Masdar Institute, in partnership with the Massachusetts Institute, focuses on research and development, as well as fostering human resources.

Masdar Power and Carbon specialize in projects related to clean energy sources including solar and wind power, and carbon issues such as carbon capture and storage, and clean development.

All of them are active in and outside the country, collaborating closely with overseas governments and firms.

Yet a core project which represents the UAE capital’s vision is Masdar City. The planned 6 square-kilometer city outside Abu Dhabi ultimately will sustain itself with renewable energy, have a low-carbon footprint, and produce zero waste, according to Masdar.

“Masdar city is a clear example on the direction of the Emirate of Abu Dhabi regarding the Alternative Energy Projects,” Mohammad Omar Abdullah, Undersecretary of the Department of Economic Development of Abu Dhabi, said. 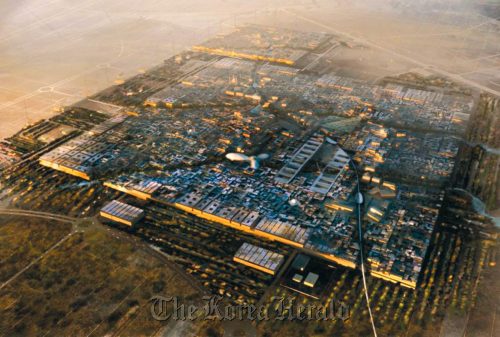 The $20 billion project whose construction was launched in 2008 is still at a starting stage as the process has been delayed due to the financial crisis. It is expected to be completed by around 2025.

Despite some skepticism that it will only be symbolic landmark for Abu Dhabi, Masdar officials said they see the goal being accomplished.

While most of its seed capital comes from the Abu Dhabi government, Masdar has drawn in foreign investors including Credit Suisse and Simens Venture Capital.

So far, more than $2 billion has been injected into the project, Rollins said.

Alongside Masdar Institute, the venue will host the headquarters of the International Renwable Energy Agency, according to the firm.

The city will have diverse renewable resources. In addition to a solar power plant, photovoltaic modules, wind farms, geothermal power facilities and the world’s largest hydrogen power plant are projected to be built at the venue.

To make the city carbon-neutral, it will only allow the use of clean transportation such as electric buses instead of motor vehicles.