The navy began a three-day maritime exercise in the East Sea on Wednesday as part of efforts to prepare against unpredictable North Korean provocations, officials said.

The maneuvers, which the navy’s First Fleet is staging in waters some 100 kilometers south of the inter-Korean sea border, came two days after the high-stakes live-fire drill on Yeonpyeong Island near the tense western sea border.

The naval exercise is being staged apparently based on the prediction that the North could launch another surprise attack in the East Sea. Major North Korean provocations this year such as the March 26 sinking of the corvette Cheonan and the Nov. 23 artillery shelling of Yeonpyeong Island occurred in the West Sea.

During the maritime drills focusing on antisubmarine and antiship operations, six naval vessels and Lynx antisubmarine helicopters were mobilized.

The 5th Army Corps also plans to stage an aerial and ground-based exercise on the largest-ever scale in Pocheon, north of Seoul, Thursday in a show of force against North Korean provocations. 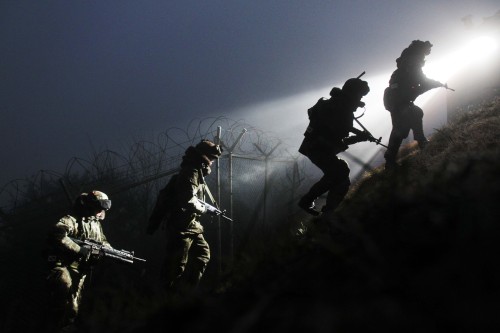 “We will thoroughly retaliate should the same situation as the one on Yeonpyeong Island occur again. During this exercise, we will show our robust military posture,” Brigadier Gen. Joo Eun-sik, head of the First Tank Brigade, said in a press release.

The military has remained on heightened alert for possible provocations by the North, which has recently ramped up its bellicose rhetoric against the South, warning of “deadlier retaliatory strikes.”

Although the North did not take any action during Monday’s live-fire exercise, the military believes that the North could target vulnerable places in the South and launch another lethal provocation unexpectedly.

“The enemy always prefers to launch a surprise attack (rather than expected ones). We have been developing measures to deal with such an attack, which could come in a variety of forms,” Defense Minister Kim Kwan-jin said during a parliamentary session Tuesday.

The South Korean military plans to maintain the highest alert level for localized provocation, called “jindogae hana,” for the time being in frontline areas including the five western border islands and the region near the Military Demarcation Line. It also plans to continue to put F-15Ks and KF-16s on standby.

The military particularly put on the highest alert its troops around Aegibong, a mountain peak located just three kilometers away from the North, as the glowing Christmas lights on a steel tower at Aegibong could be struck down by the North. The Christmas lights are regarded by the North as part of the South’s psychological warfare.

The North has deployed additional surface-to-ship and surface-to-air missiles along its west coast and put its fighter jets on emergency standby, sources said.

After the aerial and ground-based exercise, the Army plans to display the country’s high-tech combat equipment, including a K-200 infantry fighting vehicle, a 130 mm multiple launch rocket system, a 500MD combat helicopter and an artillery tracking radar, with some 2,000 citizens invited to the exhibition.