Changes brewing in ‘not so isolated’ North

Not only the social upper crust, but the majority of the general public has seen popular South Korean TV series through copies that flow in from China and is aware of the financial gap between the two divided states, North Korean defectors said during a recent forum in Seoul.

According to the defectors ― among hundreds of others who attempt to abandon their impoverished state and escape to the wealthier South each year ― such changes are causing a headache for the North Korean leader trying to secure internal unity before handing over the regime to his youngest son.

“It is difficult to fend off South Korean products and TV shows from entering the country so as long as China remains to be its main trade partner and financial donor,” said Ju Seong-ha, a North Korean defector who graduated from the North’s top Kim Il-sung University. 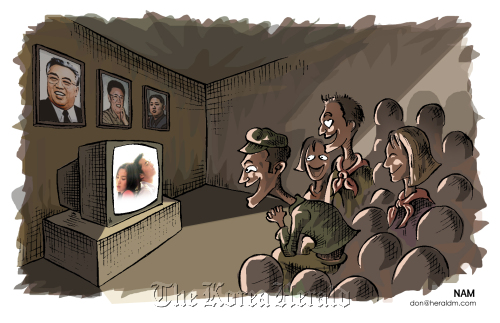 “The recent phenomena may result in North Koreans choosing South Korea over their own country when the time comes for them to decide.”

North Korea, which is one of the world’s last remaining totalitarian states and also one of the most secretive nations, keeps its people largely isolated from outside news and strictly forbids them from possessing goods that are not distributed by the ruling Workers’ Party.

But the impoverished state’s heavy dependence on Beijing for food and other commodities is inevitably opening up its people to goods and cultures from capitalist nations, particularly South Korea.

China has emerged as the world’s second largest economy after abandoning Stalinist policies and is one of the largest markets for South Korean pop culture, also widely known as “hallyu.”

Most copies of popular South Korean TV series and news that flow into North Korea are produced in China, which is notorious for illegally making cheap, low-quality copies of copyrighted materials.

A 20-something North Korean who escaped to Seoul last year said he had been “shocked” at the sight of South Korea the first time he saw a soap opera starring the country’s top celebrities.

“We had been told South Korea was an underdeveloped country full of beggars,” the defector said, requesting not to be named for safety reasons. “What I saw were beautiful, trendy people living in a glamorous city.”

“I say 90 percent of North Koreans have seen a South Korean TV series at least once,” he said.

“Because the DVD players are sold at a relatively cheap price in North Korea, many households possess them and share CDs among themselves,” the defector said. “Seeing for themselves how well-off and happy people in the South seem, many people build up admiration for the country.”

The apparent popularity of South Korean culture in North Korea coincides with President Lee Myung-bak’s recently made remarks during his trip to Malaysia.

“No one can possibly stop the changes brewing among the general North Korean public,” the South Korean president had said.

The comments by Lee come amid speculations that the Seoul government is preparing for a sudden collapse of the North Korean regime, which will likely lead to an immediate reunification of the two Koreas who are technically still at war with each other.

The North Korean dictator, who apparently suffered a stroke in 2008 and has been in weak health ever since, is striving to secure internal stability and loyalty for the young, inexperienced heir apparent Kim Jong-un, an effort that does not seem successful so far.

Many of the intellectuals in Pyongyang are also aware of the fact that their military was first to strike a South Korean island last month despite the communist state’s blame upon Seoul.

North Korea has recently been escalating investigations near national border regions after a group of 20-somethings were arrested for watching copies of foreign films that included a clip about Pyongyang’s Nov. 23 artillery attack, Washington-based Radio Free Asia reported.

Kang Chul-hwan, a researcher at the Institute of Northeast Asian Studies, said such cultural and social awareness among the general public was what the North Korean regime fears the most.

The best weapon Seoul “has against North Korea would be to enlighten the 20 million North Korean people,” he said in a column published by a vernacular daily here. “Any kind of outside information such as radio news, propaganda leaflets and South Korean soap operas are shaking up the North Korean regime.”

Kang, also a defector from Pyongyang himself, also called on the government to expand propaganda warfare by sending food and other capitalist goods to enlighten the hungry North Koreas.

“As someone from North Korea, I know how strong of a blow these actions can be to Kim Jong-il,” he said.

In retaliation against North Korea’s deadly artillery shelling on the Yeonpyeong Island, Seoul resumed its propaganda offensive and sent balloons carrying some 200,000 leaflets across the heavily fortified border last month.

Government propaganda operations had been suspended for nearly six years under a 2004 pact made by the previous liberal government in Seoul.

Although exact contents of the balloons are rarely revealed by the government, they are believed to contain consumer goods, books and video tapes of popular South Korean programs along with anti-communist leaflets to rattle the Pyongyang regime.