North Korean defectors who try to follow the South Korean education system, have a very hard time catching up with the academic standards here.

When asked what subject they lagged behind in the most going into higher education, 57 percent answered English. Even those getting ready for employment had a hard time; more than 80 percent of those seeking employment did not have an official English test score.

Students in North Korea do learn English as part of their curriculum. Charles, a North Korean defector who declined to give his real name, said he learned English as early as middle school, starting out with basic vocabulary and sentence structures. This continued in high school, for a total of six years, where eventually they read classic literature. 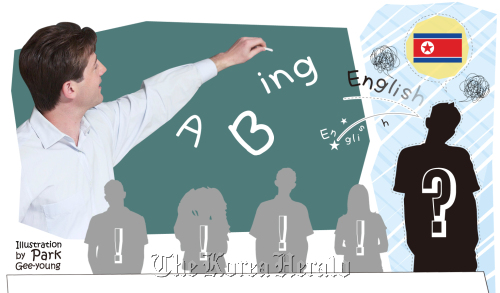 With anti-U.S. sentiment, they are often taught British pronunciation, along with other subtle differences, he said.

The focus was mainly on reading comprehension and interpretation.

English was never used outside of the academic realm.

For those just crossing over into the South and attempting to make something of themselves, academia is a very daunting realm.

“One of the difficulties I had was listening and speaking English. Since I was never taught those in the North, this was my first exposure to it,” said the freshman at Sogang University.

“When professors teach classes in college they assume that everyone has a certain understanding of English instantly making us less able to compete,” said Charles, who crossed over alone more than three years ago.

“The hardest part for me was reading theories in English, listening and expressing myself. Although I had many opportunities to meet native English speakers, I was never able to communicate with them,” said the student, who is studying science and engineering.

Charles, realizing his disadvantage decided to take a leave of absence from school to brush up on his English.

“In most of my classes I did well, but the ones where I need to study theories written in English I received low marks,” he said.

Charles is currently studying for both his intended major and English.

What is also difficult for some is the omnipresence of English in Korea.

Susan, a North Korean defector in her 30s who also declined to give her real name, was continuously frustrated at the TOEIC requirement that most companies demand, despite having no need of English in her expected line of work.

“In Korea I realize that every job I apply to, a basic TOEIC score is necessary,” said Susan, who fled the North in 1998.

Susan is attending her last semester at a university in Seoul and is currently looking for employment.

Most wish to attend English academies, but with the high price tag very few, if any, can afford to attend one.

“For students, the burden of academy tuition is significant,” said Charles.

“If you live alone or even if you live with your parents there are not a lot of people who have money to spare.”

Charles said most North Korean defectors choose to study because they really want to further themselves, but many cannot because of financial reasons.

“Honestly, everyone knows that attending an academy is really helpful but the opportunities are very low mainly because of the tuition. So even if we want to attend, many of us cannot,” said Charles.

According to Hong, of the 475 North Korean defectors in the study, 28.4 percent had withdrawn from universities, while the average rate is 4.5 percent.

Hearing the cry for help, one of Korea’s top English academies has set up a program with the Wooyang Foundation to offer North Korean defectors, a special discount of up to 70 percent on tuition, meaning it can be as low as 40,000 won ($35) a month.

Most other brand name academies currently do not offer a discount program for North Korean defectors.

Both Susan and Charles are attending English academies to boost their TOEIC or TOEFL scores.

For some students who have to support themselves on their own, the tuition is a large part of their budget.

The Wooyang Foundation was founded in 1983 as a scholarship program for those for those that could not afford education. Today, the non-governmental organization focuses on scholarships for students all over Korea, helping rural families and churches with less opportunity.