The three women, who were employed at bars, were involved in a joint surety for the “slave contract” with their pimps. After one woman killed herself, the others followed suit, feeling pressure to bear the debts she left behind.

Aimed at rooting out the rampant sex trade here, the government implemented the Special Law on Sex Trade in 2004. Brothels in red-light districts were shut down and millions of pimps and prostitutes were forced to quit working. 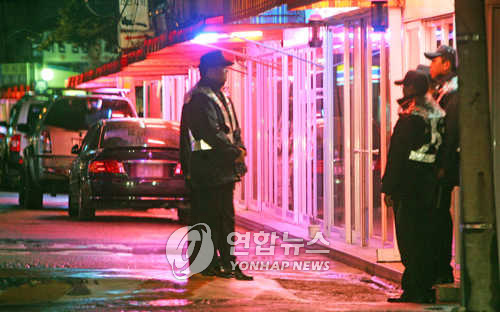 However, the nation’s sex trade shows no sign of a recession with new, clever types of prostitution, such as barbershops and massage parlors employing prostitutes, taking advantage of legal loopholes.

Marking the sixth anniversary of the law, the Ministry of Gender Equality and Family held Thursday a meeting of experts to discuss the situation.

Participants, consisting of academics, activists and government officials from the ministry and police, agreed that the law has lost its early momentum while prostitution is still rampant in its blind spot.

“The government’s policy against sex trade seemed to be going in the right direction. But the strong will has weakened over the years while abuse of women remains prevalent in reality,” said Shin Park Jin-young, president of the human rights center at the Daegu Women’s Association.

“Even high-ranking government officials and social leaders who are required to lead the anti-prostitution efforts are frequently reported to have been involved in the illegal sex trade,” she said.

She demanded the government review related measures and revive the spirit of 2004, making it clear that “the still-burgeoning sex industry is not the side-effect of the law itself but the result of the government’s lenient law enforcement.”

Under the current law, brothel owners who arrange sex for pay can face up to three years of imprisonment or up to 30 million won in fines while the prostitutes face up to one year in prison or up to 3 million won of fines.

When found to have bought sex, most clients are punished with fines. Those who finish an eight-hour education program called “John School” can have their indictment suspended.

Kwak Chang-yong, chief of the female crimes division at the National Police Agency, also admitted that the sex trade remains profitable because the people involved earn more money than the potential fines imposed.

According to him, a client pays 160,000 to 200,000 won for prostitution at a massage parlor. If the shop hires three women and they service three clients a day, its profits could reach 40 to 50 million won per month.

But the fines that they face don’t exceed 5 million won in most cases, he said. No administrative measures such as suspension of business are imposed.

Their promotional skills are getting cleverer. Some brothels operate popular online websites where clients post their comments after using their prostitution services. Others scatter thousands of name card-sized flyers using a vehicle with a hole at the bottom.

“Moreover, such punishment is possible only when their sexual affairs are proved with obvious evidence,” he added.

Having enduring years of abuse under an unfair contract with their employers, some women risk their lives seeking help from the police. But some police officers, bribed by pimps, often ignore their reports or the women also should be questioned as a suspect.

“The women’s statement is the most important part of the efforts to crack down the rampant sex trade. If they are to be investigated as suspect too, they would hesitate to speak their voices,” said Shin Park, the president of the human rights center.

Some activists said during the discussion, however, that there was some progress in helping former prostitutes with self-reliance.

As part of the law, support programs for former prostitutes also started in 2004. The number of support centers has increased from 36 to 87 nationwide this year. Along with temporary shelters for protection, several organizations offer consultations for housing and employment.

Activists said such help should be more specified to better meet the demands of the different women, such as those with children, those who are handicapped and those who are teenagers.