Korean students in U.S. put out video for peace

They wrote two songs for the video: “Become One,” the title song promoting peace, and “Go Red Devils,” a song to cheer on the South Korean national soccer team at the World Cup, said Kim Seung-hwan, president of the group MiYooMo. Kim is a graduate from University of North Carolina at Chapel Hill.

The group released the video on social networking sites, and it is currently available at YouTube, he said.

MiYooMo took the central role in producing the video, helped by 21 volunteers consisting of 13 Koreans and eight foreigners. The volunteers are university students or recent graduates of music, arts or law. Seventeen of them attend Berklee College of Music.

Kim took the role of executive director, while the music was recorded at Berklee College of Music. Kwon Jung-eun composed the two songs, with their lyrics written by Baek Jong-chan. Both Kwon and Baek are Korean students of the music college. 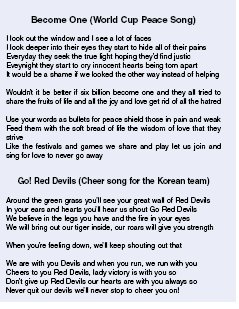 Eunice Choi, a graphic design graduate from Corcoran College of Art, edited the video. She also designed T-shirts for the students who appeared in the video. The T-shirts feature “pyung hwa” in Korean, its Romanized equivalent, Peace, a dove and a soccer ball logo created by a MiYooMo member.

The early part of the video shows the Berklee College of Music students in the T-shirts, saying “pyung hwa,” then the word “peace” in their native languages of English, Hebrew, German and Spanish.

“Become One” features a scene of Jung Dae-sae, a striker on the North Korean soccer team, shedding tears at the playing of the national anthem just before the start of a World Cup match against Brazil. Although he has South Korean citizenship, was born and raised in Japan, and plays for North Korea.

“I feel pity and sorrow for North Korean residents at the sight of his tears,” Kim said. “The song is intended to let the world understand the realities of North Korea.”

MiYooMo was founded on May 22, 2000 on Cyworld, the Korean equivalent of Facebook or MySpace. Members of the online community represent more than 300 different schools across the U.S.

Earlier, the group had created “Census Song”, encouraging Korean students to participate in the U.S. census. It also has created a rap song and video to publicize that the Dokdo islets in the East Sea belong to Korea, not Japan as it insists.