Once tools for computer-savvy youngsters, Twitter, Facebook, YouTube and other services are used by companies small and large to reach out to the public. The direct, prompt and wide-reaching communications help businesses probe consumer needs, market products and improve their image.
Social media is also instrumental to in-house management building intimate relations and closely communicate with employees.

“The conventional ‘up and down’ way that people communicate in the company has been changed to more open and broader way through the use of social media,” Kwon Soo-han, manager at human resource management department of Samsung Economic Research Institute said.

“Social media is a new online communication platform that helps companies be more creative in management and developing new idea. The use of social media tool for companies is a must, not a choice,” he said.

The use of social networking also helps companies maximize their profits. 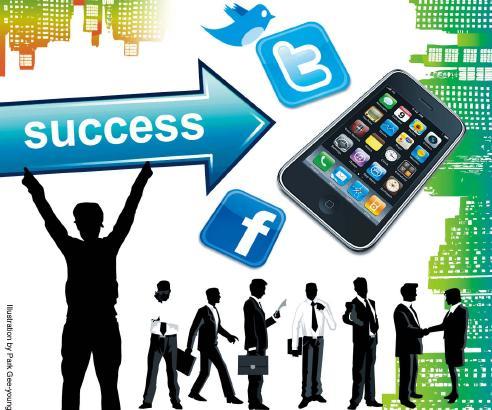 According to research by IBM, quoted by Kwon in his report, an IBM employee who uses social media tools generates an average of $588 more revenue than those who don’t.

Participation of business leaders is important to draw attention, Kwon said. Companies or CEOs must be able to deliver reliable information and give them answers directly and quickly, he added.

Companies and other organizations can certainly benefit from having their leaders use social media, a digital media strategist agrees.

“Its use can demonstrate an organization’s commitment to transparency in its business dealings throughout the organization as well as a readiness truly to listen to its customers and other stakeholders,” Charles Pownall, managing director of Emerging Media Digital Strategist at Burson Marsteller Asia-Pacific.

“The more that customers trust an organization, they more loyal they are likely to be, and the more likely they are to talk positively about it and advocate it to their friends and colleagues,” he said in an e-mail interview with The Korea Herald.

The popularity of social networking services has been further fueled by the rollout of the iPhone and other smartphones. Around 160 to 170 Korean companies have Twitter accounts, according to reports.

Smartphone users in Korea jumped to about 2 million last month from just 200,000 in June last year, according to KT. KT, the country‘s top telecom company, sells the iPhone exclusively in Korea.

Companies are trying to embrace changes in the communication channel as they have younger and tech-savvy employees than before.

“The number of young employees in companies is increasing and companies are offering and studying new guidelines for their new training programs,” Kwon of SERI said.

Companies utilizing social networking services are spreading around the globe along with the growing number of SNS users.

More than three-quarters or 79 percent of the Fortune Global 100 companies are using at least one of the top social medial platforms to actively engage with stakeholders, according to a study conducted by Burson-Marsteller, a global communication firms.

Every month this year at least 127 million people, or 57.5 percent of the online American population, will use a social network, according to eMarketer, a research firm based in the United States. By 2014, almost 165 million people -- two-thirds of all American Internet users -- will regularly use social networks due to explosive popularity of Facebook, it predicted.

The growing use of social media service will be an opportunity for Korean companies as well to expand customer relationship around the globe.

“Leading chaebol, such as Samsung, LG and Hyundai are increasingly using social media in their marketing mix, and we expect to see others use social media as more Korean companies go global, and as they better understand the opportunities, the tools and techniques associated with these channels,” Pownall said.

“When Samsung was blamed for having American Olympic medalist Anton Ono for its TV commercial in the United States, the electronic giant was able to handle the issue by directing sending a message to Twitter users saying it was AT&T ads not Samsung’s,” Kwon of SERI said.

KT is also an active Twitter user. Last July, the company set up a “social media team” under the direct control of its chief executive and chairman Lee Suk-chae. The team makes a one-page summary of tweets every day, and reports it to KT CEO Lee and other top decision makers at the telecom giant.

Some CEOs, particularly from owner families, are active in the online community. And their involvement in the new media platform will help them break the conventional -- closed and hard to befriend -- image of family-owned conglomerates.

“Social media certainly provides a means for chaebol to be seen to be more open and more customer-centric,” Pownall of Burson Marsteller, said.

“It also enables them to understand and communicate more effectively, and efficiently, with international audiences as they expand abroad,” he added.

Companies, however, should focus on increasing audience responsiveness, not just the number of followers.

Cha Mee-young from the Max Planck Institute for Software System in Germany, says that the number of followers on Twitter doesn’t equal influence.

In her paper called, “The Million Follower Fallacy,” published by the Association for the Advancement of Artificial Intelligence, “retweets and mentions, which measure the audience responsiveness to a user’s tweets, do not correlate strongly with number of followers.”

“Businesses, rather than trying to put emphasis on the follower count, could try to increase audience responsiveness in their fields,” she said in an interview with Harvard Business Review. “Influence is not gained spontaneously or accidentally, but through concerted effort such as limiting tweets to a single topic,” she said.

“Before entering into social media, make sure you have considered carefully the amount of time it can take, the need to commit regularly to online conversations,” he said.

“Make sure your communications staff has the appropriate skills to manage these channels, and that control of the conversation resides not with you but with your stakeholders -- they can choose to initiate any discussion, at any time, from any location,” he added.