‘A good dealer doesn’t collect artworks for himself’

As the second son of Park Myung-ja, Gallery Hyundai’s founder, Do took the place as president of one of the nation’s most influential art galleries five years ago.

Opened in 1970, Gallery Hyundai is the pioneer of commercial galleries in Korea and has introduced numerous artists to the public. It not only turned the artists into big stars but led Korea’s art gallery boom in the late 1970s, proving that art exhibitions could be major events that gather large crowds. The gallery currently has three exhibition spaces in Seoul, two in Sagan-dong, and one in Sinsa-dong. 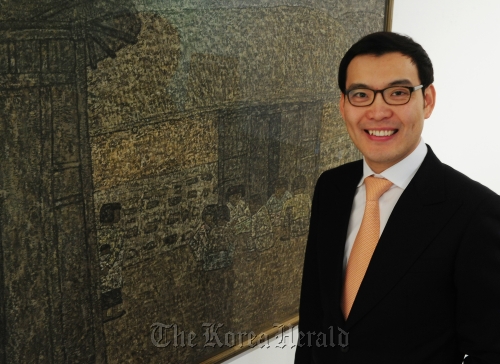 Art insiders say it was Park Myung-ja, the gallery’s founder and former president, who made all this possible. Do agreed, pointing out her gifted esthetic sense and credibility.

“Her credibility, especially, is something I could never catch up with. She is like that in her every day life, not just when doing business. I remember seeing her close relationships with the vendors at the market,” said Do.

Park’s credibility and business acumen once again stood out recently when she helped in organizing the gallery’s current exhibition on Park Soo-keun to commemorate the 45th anniversary of his death. It was Park who called every single collector of the late artist’s paintings and borrowed the works.

Thanks to her, the exhibition, which runs through May 30 at one of the gallery’s Sagan-dong spaces, showcases 45 of Park’s paintings, his photos and some of his hand-written letters.

Do still treasures his mother’s advice.

“When she says no, it means no. Although I do rebel now when I have logical reasons,” said Do, chuckling.

Opposite to what many would assume, Do had little interest in art in his youth, even though he was always surrounded by artworks and artists.

Instead, he was more of a trust-fund brat who applied for a leave of absence from Korea’s Foreign Language University and declared he was going to do nothing until his 30th birthday and simply fled to New York.

Without much thought, he majored in art at New York University and happened to fall in love with it. After that, he furthered his studies in Art History at the Pratt Art Institute based on his own willingness to learn.

The first opportunity to showoff the talent needed for what he does now came to him in 1998 at the Basel Art Fair.

Gallery Hyundai had participated in the fair since 1996 but Park Myung-ja had announced they could not that year, due to the soaring exchange rate.

Do, 30 at the time, came forward and tried everything he could, from writing letters to the fair to contacting artists to scraping up his own money to pay for the booth and the transportation.

“I knew nothing about art fairs or running galleries at that time. Some of the experienced buyers at the fair even taught me how to write invoices when they came by our booth. I found everything so amusing,” Do said.

Park, as usual, did not give him many compliments after the fair, but Do had definitely proved himself to be useful, as Gallery Hyundai had marked some actual sales there for the first time.

Since then, he moved into the gallery’s management step by step.

He picked up the essentials from his mother, like the basic rule of not coveting artworks for himself.

“I don’t collect works. We are, in a way, retailers. We need to transmit good works to good collectors. If I keep the works for myself thinking this will be worth money later on, I am a collector not a dealer. There are some dealer/collectors, but I think art dealers should not collect works for themselves,” said Do.

In areas that his mother steered clear from, Do is making some efforts independently.

After receiving criticism that Gallery Hyundai focuses too much on sales and only offered chances to established artists, Do opened the gallery Do Art in 2002, which incubates and introduces emerging artists. He also opened another gallery called 16 Bungee this year under the same goal.

This year, which is the 40th anniversary of Gallery Hyundai, will be a turning point for the gallery, said Do. His biggest goal is to introduce more Korean artists to the world. That is why he suggested publishing Park Soo Keun’s catalogue in English.

“I was embarrassed that I had nothing to bring when I met dealers and buyers overseas. Park Soo Keun is the most beloved painter in Korea. I thought it was time that we made something to better introduce him to the world,” said Do.

“We will be doing a lot of works this year, from exhibitions to art fairs, using our international networks. I can’t say what exactly right now but you will be hearing some good news, soon,” he added.

For more information on the Park Soo Keun retrospective exhibition or on Gallery Hyundai, call (02) 2287-3500 or visit www.galleryhyundai.com.