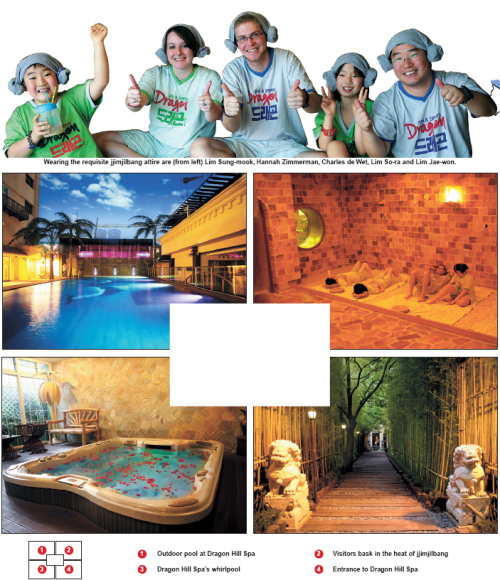 This winter has been bitterly cold and snowy. It even snowed after Gyeongchip, the day on which insects are said to emerge from their holes in the earth. Gyeongchip is the third of 24 divisions of the year in the lunar calendar, which signifies that the season changes from winter to spring. Around this time, ice on the rivers starts to melt, hibernating animals start to wake up, tree branches bud, and farmers prepare for planting. People say that Gyeongchip is the day when frogs wake up from their hibernation.

"It was so cold," he said. "However, I was very happy to see the snow. It was the first time in my life I experienced snow. I had so much fun in the snow, snowball fighting, sledging and making a snowman."

Charles and his girlfriend Hannah, his colleague Lim Jae-won and Lim's children, So-ra and Sung-mook joined me on a trip to a jjimjilbang.

The jjimjilbang we visited was the Dragon Hill Spa, located next to Yongsan Station in Seoul. Yongsan is a little world of its own in Seoul and Itaewon is right around the corner. Many tourist attractions such as the National Museum of Korea, Yongsan Family Park and the War Memorial of Korea are located in Yongsan. In addition, it is near Dongbuichon-dong, the nearest thing Seoul has to a Japantown. There are international schools located there, so diplomats and foreign business people live in the area. Yongsan is also famous for the electronics market and is a departure point of the KTX, Korea's high-speed train. Travellers who have 2-3 hours until their departure time often come to the Dragon Hill Spa.

Charles did not fully understand what a jjimjilbag was, since he came to Korea only a few months ago. He was half curious and half worried about going to one. After receiving the locker keys, Charles and Hannah went to the locker rooms and changed into jjimjilbang clothes - loose fitting t-shirts and shorts. Charles and Hannah, meeting each other in their jjimjilbang attire, shrugged their shoulders and exhanged embarrassed looks.

The first room we visited was the "salt room," which has walls plastered with salt, and coarse salt pebbles underfoot. Our 9-year-old group member, Sung-mook, curious to see if the room was made with real salt, tasted the wall and frowned. He confirmed that it was really salty. The salt room was too hot to walk around in bare feet. As we reclined and talked to each other, beads of sweat began to form. Sweat ran down our backs and our foreheads. Kids came into the room and then left the room to cool themselves down. Hannah also seemed to have a good time talking with Charles. Lim lay straight on his back. The salt room is considered to detoxify your body.

After a while, all of us gathered in the main hall. It was like a lounge with a TV set, massage chairs and a snack bar. Lim bought sikhye and boiled eggs from the snack bar. Sikhye and boiled eggs are must-eat snacks at the jjimjilbang. Sikhye is a traditional Korean drink made with rice and malt. Icy cold sikhye is very refreshing after sweating in the hot rooms. Roasted eggs are another good snack to fill your stomach after sweating.

Another jjimjjilbang tradition is the lamb's head towel hat. Korean's say that when you roll a towel and put it on your head, your head looks like a lamb's. This is called the jjimjilbang lamb's head look. Wearing these lamb's head hats and eating eggs, we all felt united and chatted with each other. In Charles' and Hannah's hometowns, there are steam spas where people have steam baths after working out at the gym. We talked about other bathing cultures, such as Finnish saunas and Japanese open-air baths.

At lunch time, Hannah ordered mulnaengmyeon, Charles ordered jajangmyeon, the kids ordered pork cutlets, and Lim ordered miyeokguk. After lunch, the kids headed straight to the swimming pool, and the grown-ups scattered to enjoy various types of rooms, such as the pine log fire sauna, the Japanese cypress room and the ice room.

One of the most unique and interesting aspects of Korea is the jjimjilbang. Going to one is a very Korean and very popular activity that ordinary people can afford. Korean women especially love jjimjilbang. This may be because Korean mothers sometimes take care of themselves in hot rooms made of red clay for three weeks after giving birth. In addition, in days gone by, people cooked rice on the fire in red clay furnaces. The far infrared radiation from the red clay was thought to prevent women's ailments and warmed bodies.

"Jjimjil" means heat bath to make people sweat using hot air. In some senses, it is similar to a sauna. However, the far infrared radiation emitted from red clay, elvan stones, and germanium heated to a high temperature (over 700 degrees Celsius), passes 4-5 cm beneath the skin and facilitates cell activities and blood circulation. The far infrared radiation also reduces pains in muscles, back, shoulders and joints. Higher body temperatures are also good for the immune system.

In addition to these physical benefits, the jjimjilbang helps us to relieve stress while we have fun with our families and friends. While karaoke and movie theaters are for young people, and bars are for adults, a jjimjilbang is a place for people of all ages.

The jjimjilbang is a microcosm of Korean leisure culture. When you go to a jjimjilbang, you can find gyms, baths, barber shops, playgrounds for kids, karaoke, PC cafes, golf putting ranges, nailcare shops, massage rooms, cafeterias, restaurants and swimming pools. If you have not visited a jjimjilbang, you cannot say that you know Korea.

Dragon Hill Spa is a huge luxury jjimjilbang with 13,223 square meters of space. Dragon Hill Spa was selected as one of nine places recommended to business travelers by CNN. It is also a member of the Magic Boarding Pass Program of Asiana Airlines, so a customer with an Asiana Airlines boarding pass will get 50 percent off the price of admission. There is a customer service hotline provided in English, Chinese and Japanese (02-797-0002).

l Location: Next to My Wedding Hall

at the plaza of Yongsan subway station,

Siloam is located at the back of Seoul Station and uses natural germanium bedrock water pumped up from 300 meters underground. It is popular with both individuals and groups because it offers a variety of convenient facilities. In particular, sectioned sleeping rooms are very popular.

l Location: No. 1 exit of Seoul Station subway station, No. 5 exit of Chungjeongno

Oasis is a family-friendly jjimjilbang with various sports facilities such as a gym, golf range, and an aerobics room equipped with the best and most advanced equipment, as well as a hotel-class sauna, family rooms, and a DVD theater for kids. There are foot acupressure machines, a sports massage shop, a nailcare shop and an "aesthetic shop" located here. After working out, visitors can enjoy the cozy jjimjil rooms such as the salt room and the pyramid room or relax while soaking in natural bedrock water.

Discount coupons of 30 percent are available at www.zzimzilbang.com

l Location: No. 1 exit of Janganpyeong subway station, 4th floor of Yesin Plaza building after getting off at Jangan4-dong Office

What is the origin of jjimjilbang?

Theory one: The origin of Jjimjilbang can be traced back to the Joseon Dynasty. The first mention of Jjimjilbang is found in the "Sejong Sillok," the royal chronicles of the Joseon Dynasty. It recorded that 2 people each from Jeonuigam (a medical school) and Hyeminseo Jesaengwon (a public hospital for the poor) were selected and sent to Hanjeungso. Hanjeungso was similar to today's Jjimjilbangs. This was during the 15th century. Given the fact that doctors were selected and sent to Hanjeungso, Hanjeungso seems to have been a private medical clinic. When we imagine the structure of Hanjeungso, we can envisage 13-16 square meter floor, which was walled with red clay and granite rocks to build a 5m-high dome-shaped room. The room was heated with the fire in the furnace for 5 hours, and water was sprinkled on the floor to adjust the humidity.

Theory two: People entered pottery kilns or charcoal kilns which remained hot after baking potteries or charcoals. Far infrared rays from the red clay and germanium were thought to have some remedial effects on people.

This is the 71st in a series of articles highlighting tourism spots in Seoul. The guide for planning weekend trips in the capital city will help readers rediscover Seoul. - Ed.