[History through The Korea Herald] Nuclear weapons and South Korea

US nuclear weapons were in the South until 1991; Seoul once pursued own atomic bombs in '70s

“History through The Korea Herald” revisits significant events and issues over the seven decades through articles, photos and editorial pieces published in the Herald and retell them from a contemporary perspective. – Ed.

In its Aug. 16, 1957 edition, The Korea Herald, then called The Korea Republic, carried a story titled “Atom arms now being sent here,” based on what the country’s envoy to the US learned from the Washington government.

In this front page article, Ambassador Yang You-chan described the “modernization program” under way for the US Seventh Division and 1st Cavalry Division, which together formed the near 330,000-strong US military presence in Korea at that time.

“Both US outfits are receiving weapons giving them atomic capability and are being streamlined into what the Army calls the ‘Pentomic Division,'” Yang said.

The Korean envoy also relayed to the Korean public the US reassurance that the Korean Army, then numbering 700,000 men, would be supplied with more modern conventional weapons.

Starting in January the following year, US tactical nuclear weapons would start arriving in the southern part of the Korean Peninsula. At one point in the late '60s, the peninsula was one of the major nuclear stockpile flashpoints, with a whopping 949 warheads kept in the South.

Decades later, in 2023, there are no nuclear arms in the South, while its belligerent neighbor in the North is considered a de facto nuclear state. North Korean ruler Kim Jong-un, in his year-end address, openly called for an “exponential” increase of the country’s nuclear warhead production.

What happened in between?

US nukes in the South

For 33 years from 1958-1991, there were all sorts of tactical nuclear weapons in South Korea, from cannons, rockets to cruise missiles and standard warheads. 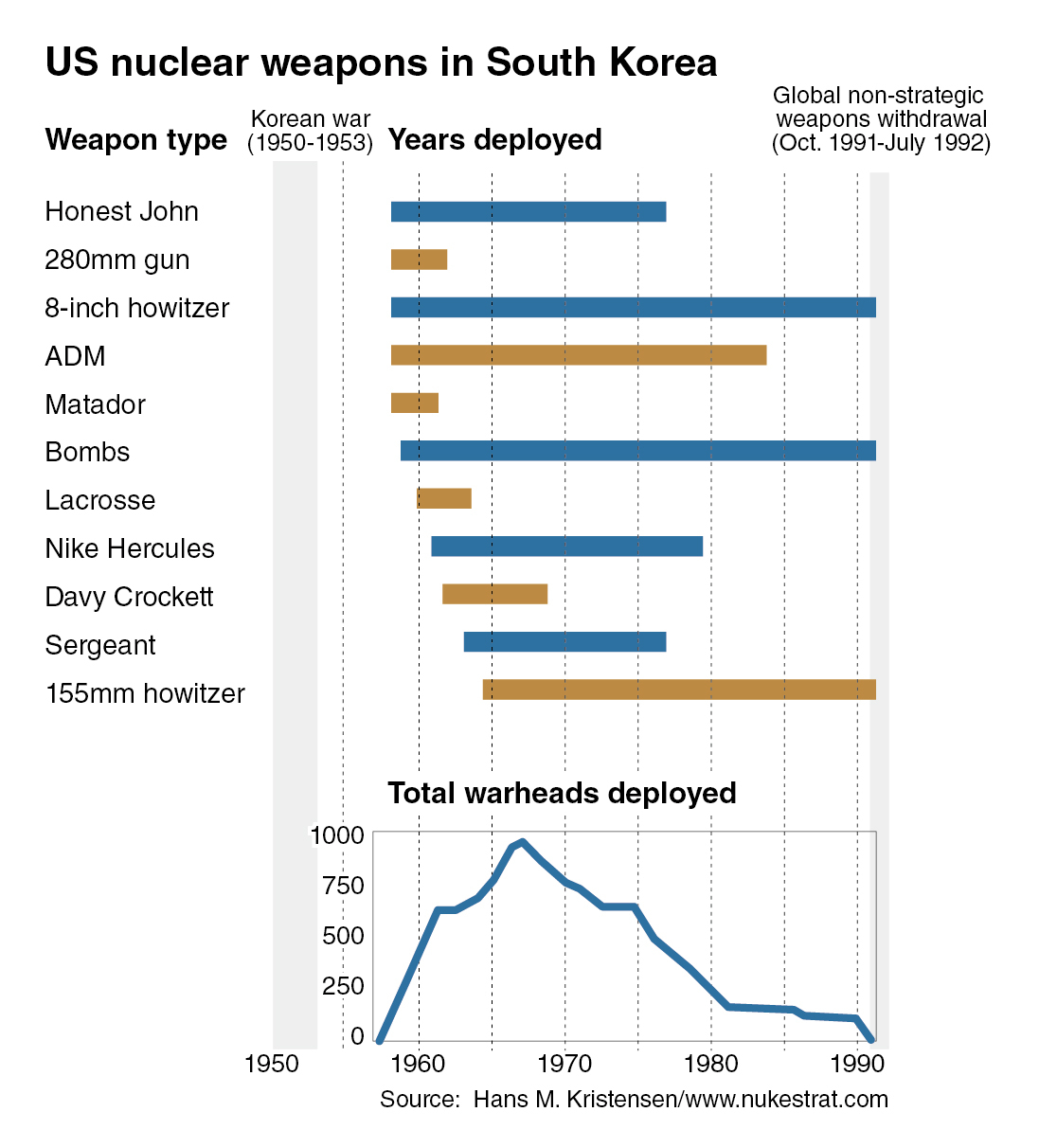 According to Yang Uk, a military expert and researcher at the Asan Institute for Policy Studies, the first batch of nuclear weapons deployed in South Korea in January of 1958 included nuclear-capable surface to surface rockets known as Honest John and the M65 atomic cannons nicknamed the Atomic Annie. Soon followed the B61 bombs, which still remain as the primary nuclear warheads of the US Army.

“The nuclear rollout here was in line with the Seventh Division’s incorporation into the Pentomic Division,” he wrote in an article published in Defense and Technology magazine.

It was a time when the US Army reorganized itself for future battles with tactical nuclear weapons and Pentomic refers to a new concept of combat training, doctrine and divisional organization for the nuclear age.

“Around 1967, the stockpile of nuclear warheads here approached 950. This maximum nuclear buildup appears to be a strategic decision given that the Vietnam War was under way at that time,” Yang said.

Going through the '70s and '80s, the makeup and lineup of the US nuclear assets here changed, with the introduction of more advanced weapons, but the warhead stockpile itself continued to shrink.

Then came 1991. In July, US President George H. W. Bush and Soviet leader Mikhail Gorbachev signed a landmark agreement -- the first between the two Cold War superpowers that provided for steep cuts in their respective nuclear arsenals.

In September that year, Bush announced the withdrawal of all land-based and sea-based tactical nuclear weapons from South Korea.

Two months later, South Korean President Roh Tae-woo declared that his country would not “manufacture, possess, store, deploy, or use nuclear weapons.” South Korea has since abided by that principle.

North Korea, in the meantime, has conducted six nuclear tests so far and appears poised to do another one at any time. According to South Korea-backed Korea Institute for Defense Analyses, Pyongyang now has an estimated 80-90 nuclear weapons and is aiming for a stockpile of 300.

In the '70s, under military junta Park Chung-hee, South Korea had covertly pursued its own nuclear arms. This was when the US, after the failed Vietnam War, sought to roll back its military engagement in Asia, telling its allies to tend to its own defense.

The North at that time ceaselessly provoked the South and the US, not just by words but by real actions, including an assassination attempt on Park and attacks on a US military plane and ship.

According to declassified documents and statements of key people in the know, Park had assembled a team of scientists -- as many as 870 in the late '70s, telling them to complete the production of nuclear bombs by 1977.

This, however, was soon discovered, and eventually thwarted, by the US.

Telegram messages sent from the US Embassy in Seoul to the US State Department in the early '70s -- then classified -- contain intelligence obtained about Park’s clandestine nuclear ambitions.

A briefing memorandum dated Nov. 20, 1974, and directed to the US State Department, titled “Korean Advanced Weapon Developments” offers a more comprehensive overview of the Korean situation.

“Present intelligence estimates are that the ROK could possibly fabricate a nuclear device by about 1980, provided that it is prepared to violate agreements associated with its power or research reactors and derived nuclear material and that it could obtain the necessary chemical separation facility in the interim,” it read.

Another declassified US document defines the US “basic objective as (1) to discourage, and (2) to inhibit the ROK effort to develop a nuclear explosive capability or delivery system.”

Under immense US pressure, Park is known to have given up on the nuclear plan. And after he was shot dead in 1979 by his chief intelligence officer, no leader in this country is known to have ever mentioned a need for nuclear armament until President Yoon Suk Yeol did recently.

During a policy briefing by his defense and foreign ministries earlier this month, Yoon said, “It’s possible that the problem gets worse and our country will introduce tactical nuclear weapons or build them on our own.”

“If that’s the case, we can have our own nuclear weapons pretty quickly, given our scientific and technological capabilities.”