The Saudi Ministry of Industry and Mineral Resources argues in London conference: "Saudi Arabia will become a leader in the sustainable production of metals, for the benefit of the net-zero transition."

His Excellency Khalid Al-Mudaifer, Vice-Minister for Mining Affairs, Ministry of Industry and Mineral Resources, Kingdom of Saudi Arabia, laid out the case for urgent investment in minerals and metals extraction and value chains in Saudi Arabia.

LONDON, Dec. 2, 2022 /PRNewswire/ -- International delegates and global mining investors attending London's Mines and Money conference have heard how Saudi Arabia is arguing that the energy transition from hydrocarbons to renewables is opening the path for it to become a global leader in the sustainable and innovative production of minerals and metals, especially since a vast, new and largely untapped minerals super-region is emerging, stretching from Africa to central Asia. 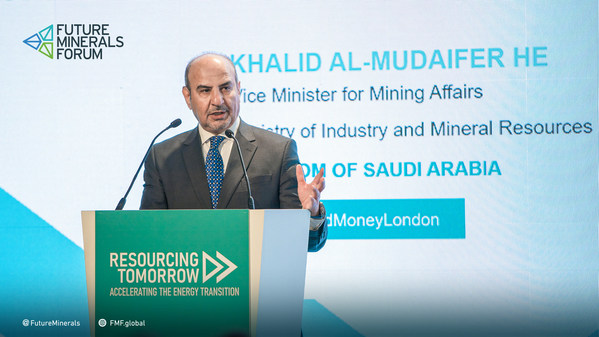 His Excellency Khalid Al-Mudaifer, in a keynote address at the event said that minerals are indispensable to the energy change to renewables:

In terms of phosphate fertilizer production alone, the Kingdom has already become the world leader.

HE The Vice-Minister further pointed to important projects such as the Kingdom's work in hydrogen, with KSA creating the largest green hydrogen plant in the world

KSA says that it is ripe for investment, not only in its Arabian Shield region but also to help spearhead minerals extraction in the super region:

"We are well placed to further scale-up mining, and build integrated value chains. We have a stable government, and we have stable fiscal policies. We have experience. We have low-cost energy. We have excellent infrastructure."

HE the Vice-Minister renewed invitations for delegates to attend the powerhouse second edition of the Future Minerals Forum, championing the future of mining, attracting massive investment, and building solid partnerships in Saudi Arabia and throughout the mining super region that stretches from Africa to Western and Central Asia.

The Forum launches on January 10th, 2023, with an influential Round Table consisting of Government Ministers and their representatives, and is followed by two days of a conference and exhibition attended by 6,000 delegates.