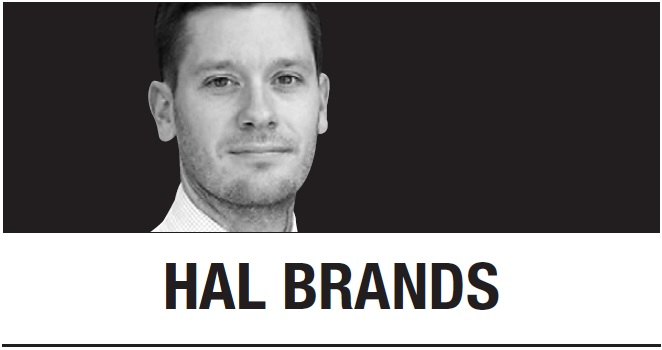 Ukraine has notched another big victory in its war against Russian aggression: the liberation of the Kherson without a grueling urban battle. Yet that triumph was met with mixed messages from US President Joe Biden’s administration on a very sensitive subject: whether the Ukrainians should begin peace negotiations with Russia.

The chairman of the Joint Chiefs of Staff, Gen. Mark Milley, argued that the Kyiv government should seek a settlement before the conflict becomes a stalemate like World War I. Other US officials pushed back, saying that Washington would never force Ukrainian President Volodymyr Zelenskyy to negotiate or make concessions.

It was a rare display of rhetorical messiness by a relatively disciplined administration, which reflects real uncertainty about four critical questions -- not least of which is whether a long war strengthens or weakens the US.

For months, Russian forces had been exposed in Kherson, with 20,000 troops holding a vulnerable beachhead on the right bank of the Dnipro River, near where it flows into the Black Sea. The Ukrainians pounced, using US-supplied High Mobility Artillery Rocket Systems (HIMARS) and other weapons to isolate those forces, and then grinding them down with a methodical offensive. The Russians couldn’t sustain their position forever; they withdrew in early November rather than have the isolated, ill-supplied units captured or destroyed.

It was just one in a series of Ukrainian victories since early September, including the liberation of large swaths of territory around Kharkiv in the northeast and the severing of the Karch Bridge from Russia to Crimea. But if the Biden administration seems suddenly conflicted about the course of the war, that’s because several key challenges are looming.

First, is Ukraine headed for further gains or a grinding deadlock? On the one hand, the liberation of Kherson has brought Ukrainian forces within HIMARS range of Russia’s remaining supply lines into Crimea, while troops freed up by this victory can prepare for new offensives elsewhere.

On the other hand, Ukraine’s battle-bruised army may need a rest. It may also face stiffer resistance as Russian forces increase their numbers thanks to an influx of conscripts; shorten their supply lines; prepare trenches and other layered defenses; and dig in for the cold weather ahead. To be fair, the Ukrainians have surprised skeptics before. But given that they have now squeezed Russia out of its most vulnerable positions, the next steps could be harder.

Second, how likely is escalation? Putin has threatened to use nuclear weapons to hold five regions he has illegally annexed since 2014. Ukraine has walked right over those red lines in eastern Ukraine and Kherson. Yet Crimea is more central to Putin’s narrative of Russian resurrection; its loss could undermine his political prestige more seriously than any prior reversal. So recent events haven’t fully quieted those within the administration who think an imperfect peace may be preferable to even a slight risk of catastrophe.

Third, will the pro-Ukraine coalition hold together? The European allies have mostly been solid; Ukrainian victories have likely ensured international support through the winter. Candid observers, including Secretary of State Antony Blinken, acknowledge that Putin has shown no interest in compromise.

Yet Biden’s team still aims to avoid a scenario in which Ukraine is seen to be blocking diplomacy as Europe -- deprived of Russian energy supplies -- suffers an economically punishing winter. The White House may also be concerned about what a Republican-led House of Representatives will mean for America’s position on Ukraine aid come next year.

This is presumably why the administration urged Zelenskyy to retreat from his earlier statement that Ukraine would only negotiate with the next leader of Russia, which had effectively made regime change in Moscow a Western war aim. If Ukraine wants the support necessary to win the war, it must show that it is open to negotiating an end to it.

Finally, does a protracted conflict help or hurt the US? If this war has imposed terrible costs on Ukraine, it has been a strategic windfall for Washington. Russia’s military is being reduced to rubble. The North Atlantic Treaty Organization is expanding and strengthening its defenses. China is facing greater resistance in the Western Pacific, as Japan, Taiwan and Australia hasten their military preparations. European nations that now see the downsides of dependence on one coercive autocracy are reconsidering their ties with another: Beijing. Amid Putin’s serial struggles in Ukraine, assertive authoritarianism no longer looks like the wave of the future.

Yet key officials wonder whether the US has already reaped all the advantages the Ukraine war has to offer. As time passes, the cost may get higher -- in distraction from other regions, in scarce munitions consumed, in vulnerability to crises that break out elsewhere.

There are countervailing considerations: A long war that exposes how pitifully inadequate the US defense industrial base has become could force the nation to get serious about rearmament. Still, if the situation in the Taiwan Strait is deteriorating as rapidly as American officials say, then the premium on ending the Ukraine conflict relatively soon may get higher.

Of all the debates and dilemmas lurking behind the recent talk about negotiations, perhaps the most pressing is the fear that Washington just doesn’t have all the time in the world.