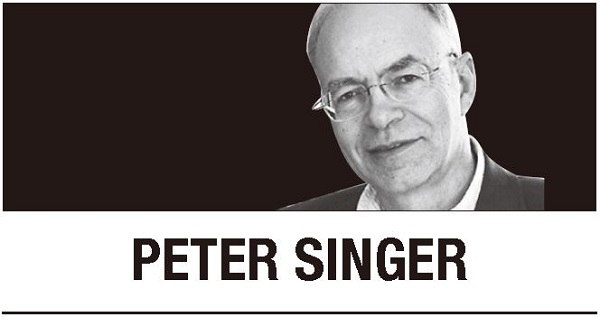 In the wake of the collapse of the cryptocurrency exchange FTX, and amid reports that FTX’s founder, Sam Bankman-Fried, diverted billions of dollars of clients’ funds, some observers have linked the alleged financial malpractice to ideas widely held within the “effective altruism” movement, which Bankman-Fried says inspired him. More specifically, they point to the ethical view that the end justifies the means.

Effective altruism holds that one of our aims should be to do as much good as we can. In pursuing this goal, effective altruists believe, we should use reason and evidence to guide us. We should draw on research to find which charities do the most good, per dollar received.

In keeping with these ideas, I founded The Life You Can Save, a charity that encourages giving and curates a list of the most effective charities aiding people in extreme poverty. Another effective altruism website, 80,000 Hours, provides guidance on choosing a career that will enable one to do good. Included among a range of options is “earning to give” -- seeking to earn well, not in order to live lavishly, but to be able to donate more to effective charities.

Many people seek to earn to give, but, until last month, Bankman-Fried seemed to be by far the most successful. In October 2021 a Forbes cover story reported that he had amassed $22.5 billion before turning 30, adding, “He just wants his wealth to survive long enough to give it all away.” Tragically for FTX’s clients, investors, employees, and those who would have benefited from the charities to which he might have donated, it didn’t. The fund Bankman-Fried created to donate to effective altruist causes had, by June, distributed grants totaling $132 million, less than 1 percent of the wealth he was believed to have at the time. (The Life You Can Save has not received any money from Bankman-Fried.)

The Vox journalist Sigal Samuel has speculated about Bankman-Fried’s thinking: “Did he reason that the ends justify the means -- and that the ends of his plan to give away his fortune would be so benevolent that the risk of wiping out customers’ savings was okay?” The New York Times columnist Ross Douthat sets out (though without endorsing) a possible “purely negative reading” of these events. Effective altruism “is corrupted at root by its connection to a utilitarianism that, whatever protestations it may make, will always end up justifying wicked means for the sake of noble-seeming ends.” Douthat connects this corrupting form of utilitarianism to my own work by linking to a hostile review, now more than 20 years old, of two of my books.

The problem with pointing to “the end justifies the means” as the flaw that brought down Bankman-Fried is that, even for non-utilitarians, it is implausible to deny that sometimes the end does justify the means. The non-utilitarian Immanuel Kant disagreed, writing that if a would-be murderer comes to your door pursuing someone who has taken refuge in your house, you must not lie to him. Today, we honor those who had the courage to hide Jews from the Nazis and lie when the Gestapo came to their door. If you must lie to save an innocent life, the end justifies the means.

Nor is it only when an innocent life is at stake that the end may justify the means. In a forthcoming study of the Southern Black leader and educator Booker T. Washington, Desmond Jagmohan of the University of California, Berkeley reveals that Washington, the founder and president of the Tuskegee Institute in Alabama, misrepresented what the Institute taught in order to gain financial support from wealthy white donors. Because the donors did not believe that Blacks could benefit from the kind of education provided by colleges for white students, Washington led them to believe that the Tuskegee curriculum was limited to training its students for trades, farming, and domestic service.

Washington’s secret was nearly blown when a grateful Black student wrote to thank one of the donors for the scholarship that enabled her to study philosophy, politics, and rhetoric. The letter’s angry recipient rightly felt that he had been misled, but Washington pretended that the young woman had greatly exaggerated what she had been taught. In the difficult position in which he found himself, Washington’s deception was justified by the goal of providing Southern Blacks with the education that would otherwise have been denied to them.

In contrast, the deception in which Bankman-Fried is alleged to have engaged was unnecessary and unjustified. The many examples of successful financiers who have been ruined by unethical and illegal business practices should have been sufficient warning. Kant was wrong to claim that telling the truth is an absolute requirement, but wise effective altruists and utilitarians know that honesty is the best policy, and dishonesty is inherently risky. In Bankman-Fried’s case, the risk was not only to his wealth, his reputation, and possibly his freedom. It was also to the causes that would have benefited from his support, and to the effective altruism movement itself.

Peter Singer, a professor of bioethics at Princeton University, is founder of the charity The Life You Can Save. -- Ed.