Coffee is a big deal in Korea.

The recent Gangneung Coffee Festival held earlier this month attracted about 350,000 visitors over the three-day festival period. The value of the country’s coffee imports also exceeded 1 trillion won ($700 million) last year, according to the Korea Customs Service and industry sources.

Amid the still-burgeoning growth of the Korean coffee industry, three coffee aficionados teamed up to publish a guidebook in English, introducing 82 must-visit cafes across the country. 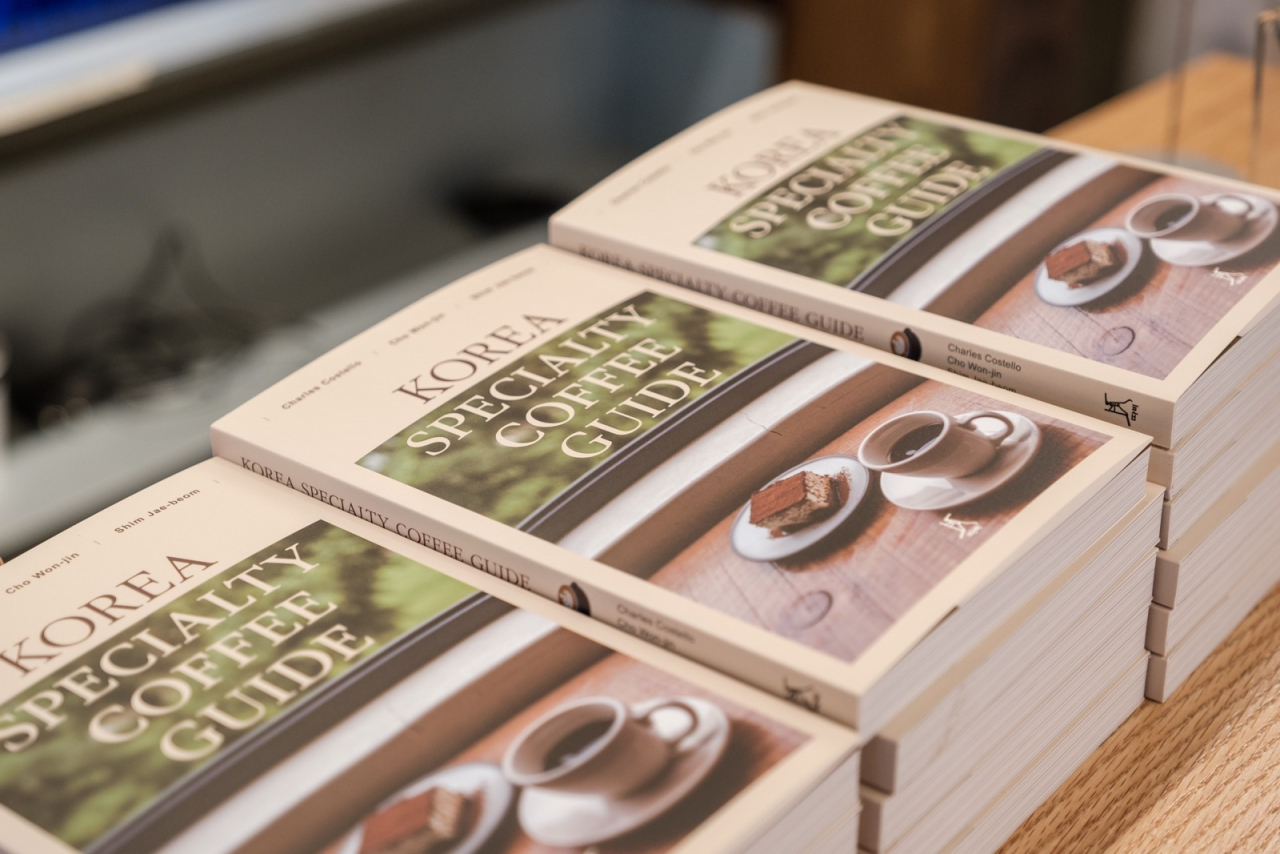 “It might be the perfect tool for a coffee-focused tourist who wants to tick off a few of the top coffee shops while traveling in Korea,” Charles Costello, one of the three co-authors of the book, told The Korea Herald in an email interview. While traveling cities around the world such as Auckland in New Zealand, Melbourne in Australia and Japan's capital Tokyo, the British coffee lover has been keeping a record of all the coffee shops he visited.

“There are tens of thousands of cafes in Korea, we decided to keep our focus on as narrow a field as possible, notably specialty coffee shops,” Costello said.

In 1984, the American Specialty Coffee Association of America based in San Francisco established a 100-point scoring system, referring to beans of the highest grade -- with 80 points or above -- as “specialty coffee.”

Costello and co-authors Cho Won-jin and Shim Jae-beom have been writing about specialty coffee via their blogs or Instagram accounts for more than a decade. Cho and Shim have been writing columns about coffee for local newspapers. The pair also published a book “Specialty Coffee, From San Francisco to Seongsu” in May.

“Shim and I have known each other for more than 10 years. Back then, there were only a few who posted stories on the internet about specialty coffee,” Cho said, speaking to The Korea Herald on Oct. 16.

“We casually met one day and talked. And we all had the desire to introduce Korean coffee to foreigners, so we started this project two years ago.”

“I think Koreans are very fond of coffee in general, and that leads to the love for and interest in specialty coffee as well. On one hand, the Korean society is a very overworked society, and you need to drink coffee to survive, and that naturally leads to interest in more premium coffee,” said Shim. Shim is a certified Q grader, a professional skilled in the sensory evaluation of green, unroasted coffee bean.

While listing the cafes, the three agreed on several characteristics of the Korean specialty coffee scene -- full of personality and designs.

“Branding aspect is unique, from design concepts -- minimalist spaces like Felt -- to the logos themselves like Fritz. Overseas brands have less focus on brand aesthetics when compared to Korean coffee brands,” said Costello.

“During this project, we talked to many foreigners, and they agreed that Korean cafes are very ‘Instagrammable,’” added Shim. “There might be some side effects but those visual factors draw in visitors and tourists.”

The guidebook contains information on the cafes’ locations, operating hours, signature items as well as stories of the people who built and nurtured the specialty coffee cafes.

Among the listed cafes, the authors recommend a handful of cafes that deserve a little more attention in terms of size and brand in the specialty coffee industry.

The history of specialty coffee in Korea began with three cafes, namely Terarosa, Namusairo in 2002 and Coffee Libre in 2009, according to the book.

Terarosa first opened in Gangneung, a coastal city in Gangwon Province. Marking its 20th anniversary this year, the brand now has 19 branches across the country, including a flagship store in Gangnam.

Set in a renovated traditional hanok building, Namusairo was one of the first specialty cafes opened in Seoul. The brand has been making a name for itself in the coffee industry both domestically and overseas. It is famously the first Korean brand to reach the American market in 2014.

Located in an alleyway of Yeonnam-dong, Coffee Libre is one of the most influential cafes in Korea’s specialty coffee scene. Its founder Seo Pil-hoon was the first Korean to be registered as an SCAA Q-grader in 2007, winning two consecutive World Roasters Cups in 2012 and 2013.

Fritz has been setting new trends in the coffee industry since its establishment in 2014. A group of A-list industry experts -- chef, coffee importer, coffee roaster and barista -- opened the cafe in Mapo-gu. It is recognized for the seal mascot on its merchandise, which includes clothing, badges, cups and bags.

Felt, located in Jongno-gu, central Seoul, is famous for its unconventional minimalist design strategy. Relatively new on the scene, the team now roasts 70 metric tons annually and supplies beans to 300 cafes across the country.