[Shang-Jin Wei] Is China's zero-COVID policy worth the cost? 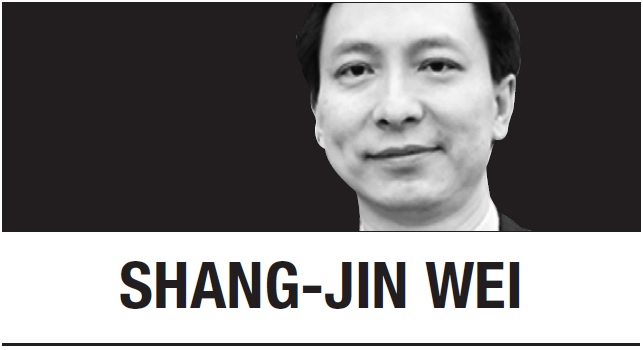 Before COVID-19 vaccines were developed and distributed, China’s strict approach to controlling the virus resulted in fewer deaths and a much lower death rate per million people than in many other countries. But while these successes were impressive in late 2020 and early 2021, effective vaccines and treatments have become readily available since then, leading the World Health Organization to declare that the end of the pandemic is in sight.

Yet China has maintained its strict zero-COVID regime. While this containment strategy has saved many lives, it has also slowed the country’s economy, exacerbated supply chain disruptions and kept millions under lockdown for months. Does the zero-COVID policy pass a cost-benefit test in 2022?

China’s government and many investment banks had predicted that its economy would grow by roughly 5.5 percent in 2022, on the assumption that COVID-19 restrictions would be lifted. Instead, China’s economy is now expected to grow closer to 3.3 percent this year. By reducing the growth rate by 2.2 percentage points, the zero-COVID policy will likely cost China $384 billion in lost gross domestic product.

Estimating the number of lives saved by the zero-COVID approach necessarily requires some assumptions of our own. According to the University of Washington’s Institute for Health Metrics and Evaluation, 244,489 Americans will have died from COVID-19 this year. Suppose the Chinese had the same vaccines, vaccination rates, public attitudes, and public-health policies as the United States: 1,051,300 Chinese would have died from COVID-19 this year -- given the Chinese population is 4.3 times that of the US -- rather than China’s likely death toll of 6,968. Forgoing $384 billion to save 1,051,300 lives means that the Chinese policy placed an average value of at least $365,262 on every life saved.

A cost-benefit analysis requires assigning a monetary value to life. Governments have to do this in order to make informed policy decisions and to determine how to compensate victims of accidents and disasters. This calculation, known as the “value of a statistical life,” or VSL, is often estimated from observing how much people are willing to pay to reduce a given risk. In the US, the VSL used by government agencies is around $9 million.

So what is the value of a statistical Chinese life? One may gauge this by the ratio of per capita incomes in the two countries. The Chinese per capita income was $12,359 in 2021, or $19,338 when adjusted for purchasing power, compared to $69,288 in the US. Hence, the Chinese VSL is $1.3 million-$2.1 million. By these numbers, the zero-COVID approach could easily pass the cost-benefit test, since the value of the lives it saved would be 3.6-5.8 times the value of the lost economic output.

Another approach to estimate the value of a statistical Chinese life is to look at the monetary compensation that China’s own laws stipulate in cases of death due to traffic or industrial accidents. For the death of a person younger than 60, for example, the compensation would be 20 times the average annual disposable income in the victim’s place of residency. For deaths of those older than 75, it would be five times the annual average income. Other components -- including emotional distress, funeral costs and support for children under 18 -- may be generously assumed to be five times the average annual income.

Given that the average annual disposable income in China is about $10,000, the life of a person younger than 60 would be valued at $250,000, and the life of someone older than 75 would be $100,000. Even if we take the highest of these estimates ($250,000), it would still be 30 percent less than the minimum required to justify the cost of the strict zero-COVID approach.

For the policy to pass the test according to this VSL estimate, the number of deaths it prevented would have to be close to 2 million. That is not entirely implausible, given Chinese vaccines’ lower effectiveness and the possibility of overwhelmed hospitals from a massive outbreak.

These calculations could be modified in many ways. In particular, the benefits may be supplemented by the savings from reduced COVID-related hospitalization, whereas the costs may be augmented by the stress and reduced well-being experienced by the Chinese from the frequent lockdowns and COVID-19 testing. In any case, we cannot rule out the possibility that China’s zero-COVID approach passes a cost-benefit test.

At the same time, China could take several actions to make the current containment policy less necessary. In particular, the Chinese do not have to emulate the Americans; instead, they can follow the examples of Singapore and Japan by adopting the most effective vaccines and ramping up the vaccination rates.

If China adopted Singapore and Japan’s approach, I estimate that roughly 183,000 people would have died from the virus in 2022. While this number is still much greater than the number of deaths attributed to the flu in China in 2019, it is significantly smaller than what the country would experience if it adopted America’s model. By leaving the zero-COVID measures behind, China could experience a strong rebound in economic growth without an unacceptably high number of COVID-19 deaths.