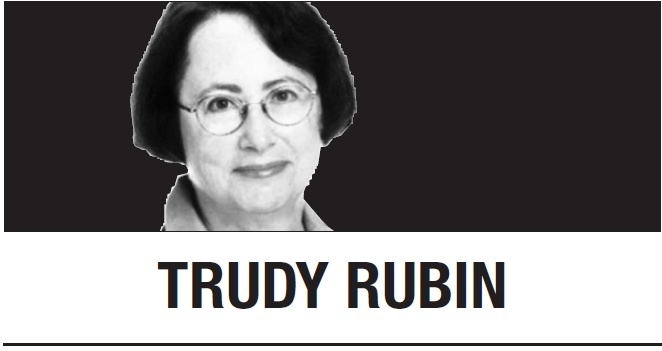 When it comes to Queen Elizabeth II, it is the marmalade sandwich I will always remember.

For those who never saw the video she made with an animated Paddington Bear that was released during her Platinum Jubilee in June, now is the time to watch it on YouTube. Watching Paddington tip his hat and thank the queen “for everything” (after she has just pulled a marmalade sandwich from her purse to show him) was incredibly touching.

But, when the two then began to clink their spoons on their teacups in tune with the ongoing celebrations outside Buckingham Palace, it was a reminder that, underneath her fabled sense of duty, Elizabeth was also human. No scriptwriter could have produced the twinkle in her eye and the clear enjoyment she showed alongside her bearish companion.

Queen Elizabeth was a rock, the world leader who was there for our entire lives, from post-World War II through the end of the imperial era through the Cold War and the Unipolar US Moment up until our current Age of Uncertainty. That is what makes her long-expected passing at age 96 still so shocking to absorb.

But it was those flashes of humor, those rare hints of deeper emotions that made her such a compelling figure. The world seems even more unstable now that she is gone.

There was something incredibly reassuring about having the same queen in England even as dictators were toppled, presidents were defeated by voters, civil wars raged in the Mideast, and prime ministers rose and fell in Britain.

When one turned on the morning news to learn what new tragedies had befallen Ukraine, what right-wing pols were gaining strength in Europe, or how many farmers had died in Pakistani floods, there was one thing you could be sure of: Queen Elizabeth was still there.

Even when her family became the stuff of soap operas, she almost always rose above the drama. Her biggest mistake was taking too long to acknowledge the intense public distress over the death of Princess Diana in 1997, which generated immense public criticism. But her commonsense antennae kicked in and she rectified the damage during Diana’s funeral by bringing the family outside Buckingham Palace and bowing to Diana’s casket as the cortege passed by.

The queen was also the global exemplar of values that seem to have long ago gone out of fashion: devotion to duty and country and traditions in the best sense, not as attributes that are claimed exclusively by one race or political party. “I declare before you all that my whole life whether it be long or short shall be devoted to your service,” she told Britons on her 21st birthday in 1947, when she was still a princess.

So, if the world is bereft by the loss of Elizabeth the Great Stabilizer, the impact on Britain will be far more destabilizing. Already, British commentators are stunned at the fact that, after 70 years, the lyrics to the national anthem must change from "God Save the Queen" to "God Save the King," Charles III. And the faces on British coinage and postage stamps must also be redone.

As for Charles, there is no way he can live up to his mother’s 70-year example. One can only wish him good luck.

Queen Elizabeth “was the rock on which modern Britain was built,” said new British Prime Minister Liz Truss, in front of 10 Downing Street, after the queen’s passing. Poor Truss only got the traditional permission to form a government on Tuesday -- from the ill queen at Balmoral Castle in Scotland. The queen, as always, did her duty, despite her poor health.

Now Truss, not a popular political figure, faces the huge challenges of inflation, soaring energy prices, economic malaise and the consequences of a hard Brexit that she championed -- all as the country is going through a period of mourning.

The queen had hinted obliquely (she did not do politics openly) that she did not favor Brexit and hoped for close relations with Europe. In 2018, she told the king and queen of the Netherlands that Britain was looking “toward a new partnership with Europe” and that Britain’s shared values with Europe were “our greatest asset.”

That would be a tragedy, and it brings me to what I believe was one of Queen Elizabeth’s finest moments.

That moment came with the queen’s historic handshake in Belfast in June 2012 with former top IRA commander Martin McGuinness, then deputy first minister of Northern Ireland, in an amazing moment of reconciliation at which the monarch wore an emerald green outfit. The moment was even more stunning because McGuinness was a top official of the IRA when the organization killed the queen’s beloved cousin, Lord Louis Mountbatten, in a bomb blast in 1979.

It was a reminder that Queen Elizabeth was not only a rock for Britain and the world, but possessed keen diplomatic skills that were not always apparent. Her death is another reminder that we are heading into very uncertain times.

Trudy Rubin is a columnist and editorial-board member for the Philadelphia Inquirer. -- Ed.