This is the last in a six-part series highlighting the next generation of Korean artists active in the international art scene.-- Ed.

Clicking through artist Kim Sung-hwan’s website is like searching through an archive of materials that seem somehow relevant to each other, only their connections are not quite apparent. Each click yields yet another interesting material -- a shot of a paragraph from a book, a black-and-white photo that captures a historical moment, the artist’s own drawings and videos.

The site appears to function as a depository of Kim’s research into topics that hold his interest, which invariably means they will be turned into art in one form or another. Just reading a few sentences flagged with a Post-it marker is enough to spark one’s curiosity. In what context was this said, observed or written? It is enough to make one want to do some sleuthing on one’s own. It also builds up anticipation about how Kim will pull them together into an organic work.

An exhibition of his works, “Sung Hwan Kim: Night Crazing,” running through Oct. 30 at Barakat Contemporary in Samcheong-dong, Seoul, is an opportunity to see how this polymath of an artist takes a topic and expands on it, adding layers and branching out.

The exhibition, the artist’s largest solo exhibition in Seoul in eight years, is a mixed media installation anchored by two films -- “Washing Brain and Corn” (2010) and “Love Before Bond” (2017).

“Washing Brain and Corn” was originally a video and drawings on the wall that have since expanded architecturally. When it was shown in Munich, Germany, a prize-winning experimental radio play was added. In Basel, Switzerland, a book was added. The work was shown in its full iteration at the Tanks at the Tate Modern in London, commissioned for the opening of the new space in 2012. 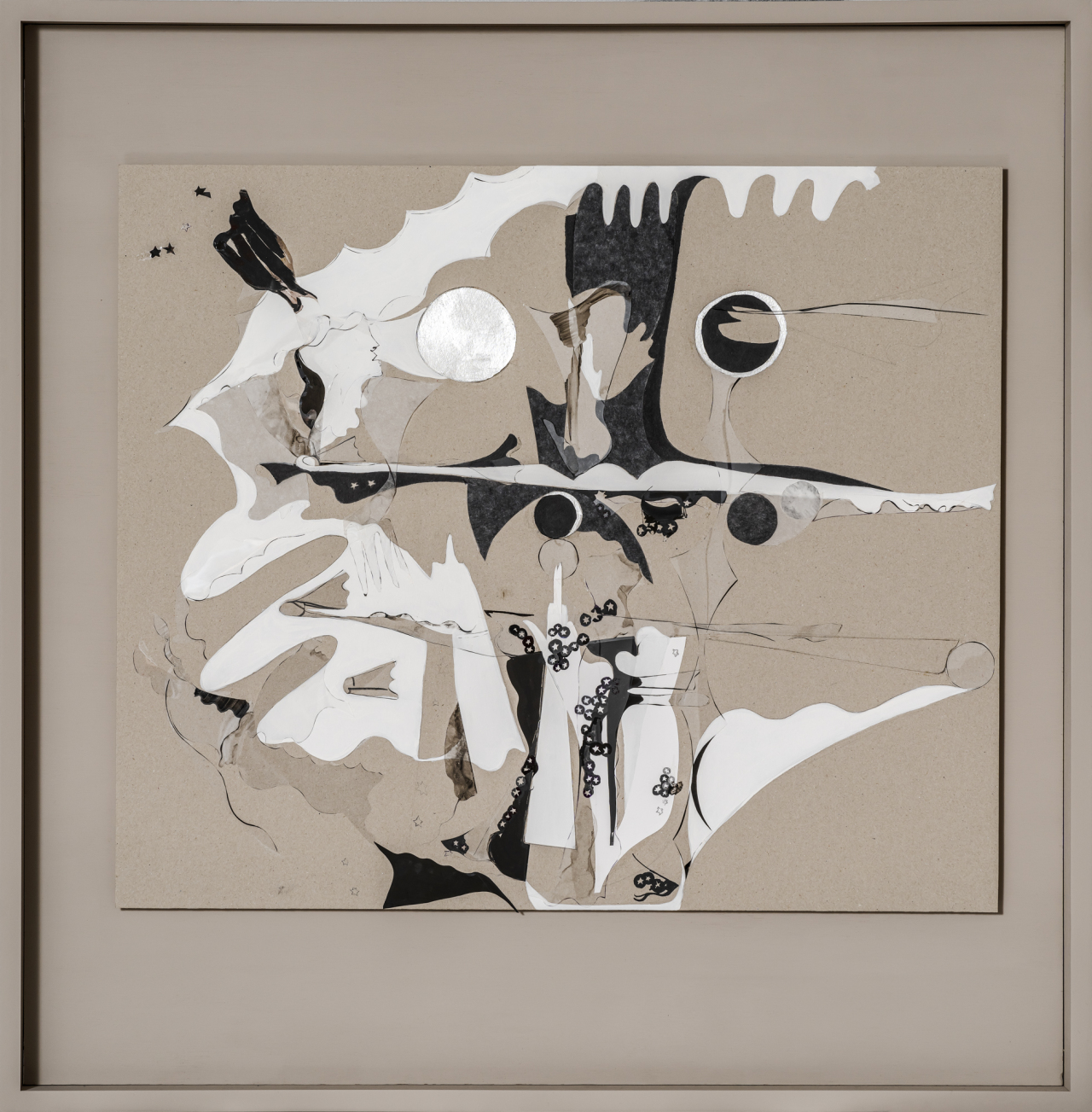 "Night Crazing 03" (2022) (Courtesy of the artist and Barakat Contemporary)

Kim reconfigures the placement of his pieces for each exhibition space, meaning his shows are never the same. The current Barakat Contemporary exhibition took about a month to complete, with detail-driven Kim on-site daily.

Virtually everything at Barakat Contemporary space is Kim’s work -- from the videos, drawings and collages to the lighting as well as the carpeting. Music is an integral part of the exhibition and on Aug. 30, David Michael DiGregorio, aka “dogr,” gave a performance of original songs that expand upon Kim’s visual works. A chanting of “Na-neun gong-san-dang-i-silh-eo-yo,” a piece that stems from “Washing Brain and Corn” was performed by DiGregorio as he walked among the audience.

Another piece that expands organically is “Love Before Bond,” which was featured at the 2017 Venice Biennale. Being shown for the first time in Korea, it is a piece that was very much of the moment when it was created and still resonates, an example of how Kim seems to have feelers for the social and historical milieu. The work came about in the time of the Black Lives Matter movement and amid calls for reparations for slavery in the US.

The film was modeled after American author Ta-Nehisi Coates’ “Between the World and Me,” a nonfiction book in the form of a letter from the author to his son, Kim explained in an interview with The Korea Herald at the Barakat Contemporary on Aug. 22. Coates’ work, in turn, adopted the structure of James Baldwin’s “The Fire Next Time.” Kim, who read all of Baldwin’s books for the film, layers different times in history, expanding his work vertically and horizontally as he explores the theme through different mediums.

The body of the boy splayed on the ground filmed from above hints at racial violence while the sound of a girl crying out “Apologize” in different voices appears to represent the collective voices for apology for wrongs committed. That voice is crying out “I deserve an apology,” Kim pointed out.

Kim’s latest ongoing work will be shown at this year’s Busan Biennale, taking place Sept. 3 to Nov. 6 in Busan. "A Record of Drifting Across the Sea" is part of a series begun in 2017 that explores the theme of immigration, yet another hot-button issue today.

History of immigration in Hawaii, including Korean immigration to the island in the early part of the 20th century will be presented alongside sculptures, drawings and photography.

“What he is showing at Busan is an archive that expresses the foreignness of immigrants,” said Kim Hae-ju, artistic director of Busan Biennale.

Asked about the significance of identity in his works, he said identity is about “how people approach the boundary. Clearly defined versus a swamp.”

New York-based Kim, who has been living in Hawaii for the project, researching and documenting materials, said of the work, “It is about reconfiguring what used to be the border.”

His residence in Hawaii is yielding materials related to Hawaiian history, culture and the struggles of the Indigenous people as well, as he conducts extensive research into the island and the history of immigration. And they are being layered into the long-term, ongoing project.

“He delves into history and offers up a sensory interpretation,” said artistic director Kim. “His works are highly unique in that he turns into art things that cannot be put into words.”

Kim, who studied architecture at Seoul National University for a year, graduated from Williams College in the US, where he majored in mathematics and art, and earned a master of science degree in visual studies at MIT.

A recipient of the 2021 John Simon Guggenheim Memorial Foundation Fellowship, Kim has shown works at major art institutions around the world, including the solo exhibition “Sung Hwan Kim’s Temper Clay” at the Museum of Modern Art in New York in 2021, “The Tanks Commission: Sung Hwan Kim” at the Tanks at Tate Modern in London in 2012 and “Line Wall” at Kunsthalle Basel in Basel, Switzerland, in 2011.