Brad Pitt says he came to Korea for food, not for ‘Bullet Train’ promotion

Making his fourth visit to Korea, Hollywood star Brad Pitt showed off his witty personality during a press conference for his new movie “Bullet Train” held at Conrad Seoul in Yeouido, Seoul, on Friday.

The two stars seemed to enjoy taking photos with the cakes and were sad when they were taken away to proceed with the conference.

“I was really pleased to be presented with good luck, and that was taken away. Does the good luck stay?” Pitt asked.

He was told that the cake would be returned to him after the press conference, and he started talking about the new movie.

“‘Bullet Train’ is about seven sociopaths on a train who are after the same thing. But none of them know each other,” Pitt said. “It is just a great summer action-adventure. It‘s hilarious and great that everyone got something to do.”

The 58-year-old American actor said that underneath the fun and eye-catching action, there is also a thought-provoking message in it.

“ The underlying theme is luck. What is luck? What is fate? Are we puppets of fate, or do we have free will? Amongst all the great action and comedy, that is the message,” Pitt said.

He went on and briefly talked about his character, Ladybug as well.

“Ladybug is what, in America, we call ’a chump.‘ He is a guy who can’t get out of his own way. No matter how hard he tries, he keeps getting it wrong. That was the fun in playing him,” he said. “I‘ve always thought the bad guys or the chumps are the most fun to play.”

Directed by David Leitch, “Bullet Train” is based on the Japanese novel “Maria Beetle” by Kotaro Isaka. In the film, Ladybug, a down-on-his-luck assassin, is on a mission to collect a briefcase on a bullet train heading from Tokyo to Kyoto. While on his mission, he discovers other assassins on board who seem to have the same goal.

Taylor-Johnson plays Tangerine, one part of an assassin duo from London. His partner Lemon is played by Brian Tyree Henry.

“This character (Tangerine) was a fascinating character. It really jumped off the page,” Taylor-Johnson said. “Tangerine and Lemon are twins. They are brothers but also partners in crime. They are like yin and yang. They bounce off one another and bring a lot of humor, but they are also very intense, unpredictable, and slightly scary.”

Pitt also talked about what it was like to work with director Leitch, an old friend who he met as an actor and stunt double in “Fight Club” (1999).

“The actor-stunt double relationship is usually about trying to help the actor fill out his character. In the director-actor relationship, the director is the ultimate author of the film. The actor wants to bring his own interpretation of the character, but he works in service of telling the bigger story, which is David Leitch’s job as director,” he said. “In the past, I might have been the boss. Now he is the boss.”

Brad added that he respects how Leitch successfully made the transition to director.

“He went on to become a director with his own language, which is quite rare,” Pitt said.

Pitt also noted that before performing action scenes, he and Leitch discussed the work of Jackie Chan. 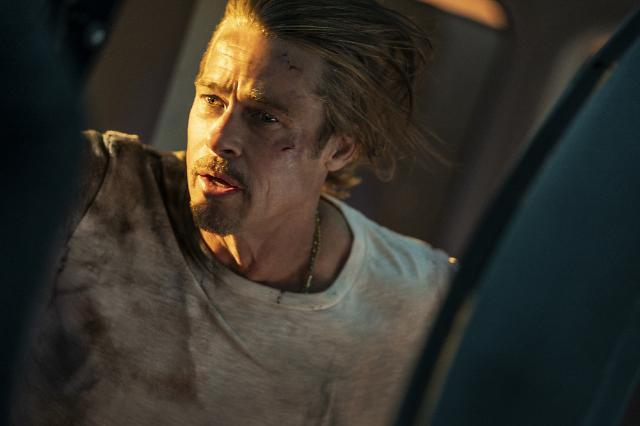 “We have always talked about our love for Jackie Chan. We think Jackie Chan is the Buster Keaton of our time, the Charlie Chaplin. He is completely underrated. The stuff he has done, his career. We respect him, and his movies inspired us, ”he said.

Taylor-Johnson added that working with Pitt and Leitch, who already know and understand each other, helped form a positive vibe when filming on set.

“Brad really has no ego. The David Leitch and Brad Pitt story is such a humbling one of friendship. And to have that energy already on set was amazing. You step onto a set where there is already intimacy and a family. It felt great going to work every day,” Taylor-Johnson added.

Toward the end of the press conference, Brad took out his smartphone and asked if he could take a photo with the reporters.

“I hope it was not too awkward. We often get to come to great places like Korea, and sometimes it goes so fast that I leave without a souvenir,” Pitt expressed his appreciation after taking photos.