Rice consumption cut in half over 30 years 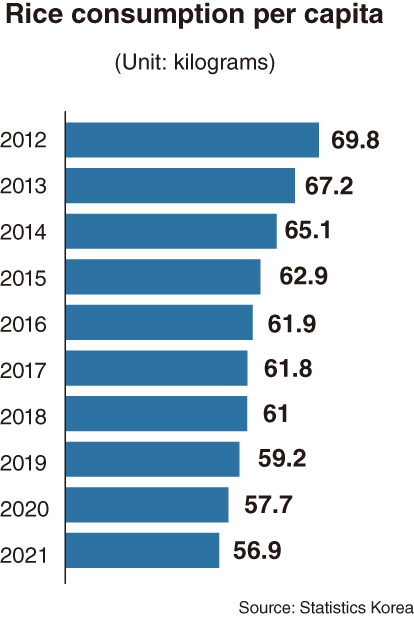 The phrase “Have you eaten rice today?” has long been considered equivalent to “How are you?” in South Korea. But it might not be the case much longer, with rice consumption shrinking amid changing eating habits, especially among younger generations.

According to data from Statistics Korea, the average rice consumption per person was 56.9 kilograms in 2021, a 17.3 percent fall over the past 10 years. Compared to 30 years ago, rice consumption was almost cut in half.

The falling demand has also led to record-low rice prices. According to the National Agricultural Cooperative Federation, which represents more than 2.1 million farmers and 1,118 regional cooperatives nationwide, the price for 80 kilograms of rice was 179,494 won ($137) as of July 5, an almost 20 percent decline over the past 45 years.

“We have purchased rice in order to support rice farmers. But with this year’s price dip, our regional branches have also been hit hard,” an official of the federation said.

Cheorwon, Gangwon Province, one of the major rice-farming sites in Korea, saw a 27 percent surge in rice production last year to 75,000 metric tons. Due to the plunging demand, the government preemptively purchased some 2,600 tons to offset the impact on producers. However, despite this measure, more than 5,400 tons remain in stock.

Yecheon, North Gyeongsang Province, is no different. There are 11,000 tons of rice stocked in the region as of June this year, up 83.3 percent from a year ago.

Experts say a growing number of young Koreans are eating less rice as they seek healthier food with less carbs.

“With the growing popularity of the weight loss industry, many tend to cut calorie intake by eating low-carb meals or dietary supplements instead of rice, a high-carb food,” said Kim Sang-hyo, a researcher at the state-run Korea Rural Economic Institute.

The domestic market for products and services related to weight loss is estimated to have reached 10 trillion won last year, according to industry estimates.

Kim stressed the government should purchase a larger public stock of rice to ease the problems rice farmers are facing.

“Food companies are currently in need of more rice to produce rice noodles and ready-made rice meals. If the government supplies low-priced rice, they can sell rice products at cheaper prices -- a win-win for both farmers and food companies.”

Kim added provincial governments could buy more rice and give it out to socially disadvantaged groups. “Battered by inflation, some might not have the luxury of choosing between rice and dietary supplements.”