The dissertation, “Eutopia Unbound: Imagining Good Places in Narratives from 1945 to the Present,” claims that four types of utopias -- communitarianism, futurism, isolationism and hedonism -- appear in the modernist imaginations of postwar-Western literature, architecture, films and other creative works. A skeptical view of the ideas of utopia is the overarching theme of Verhaest’s video works.

“After I read the dissertation, the thing stood out to me was the matrix of the opposite ideas,” Verhaest said at a press preview on Tuesday. “I thought it would be very interesting to make a game like a sci-fi movie, and I could link them to all these archival images that I have been keeping on a hard drive for years.”

Featuring 60 channels of looping video, “The Archivist” is prominently placed in the middle of the dark gallery. On each of its four sides, the artist has named a theme to represent one of the ideas of utopia: Oasis (communitarianism), Hub (futurism), Capsule (isolationism) and Bazaar (hedonism).

The artist posits that these oppositional ideologies not only repeat continuously throughout history, but also perpetuate as aesthetical stereotypes in various genres of arts, and questions if these have not already dominated our subconscious. The images used in the video are from various public domain such as the NASA Images Archive and New York Public Library.

The script of “The Archivist” was written in collaboration with text generator GPT-3 that uses deep learning based on 67 billion books, Wikipedia and other texts published on the internet.

When it comes to the term “artificial intelligence,” a term that is widely used for deep-learning machines, Verhaest is skeptical, explaining that she prefers the term “responsive” to “interactive” for media art that is created in conjunction with technology. 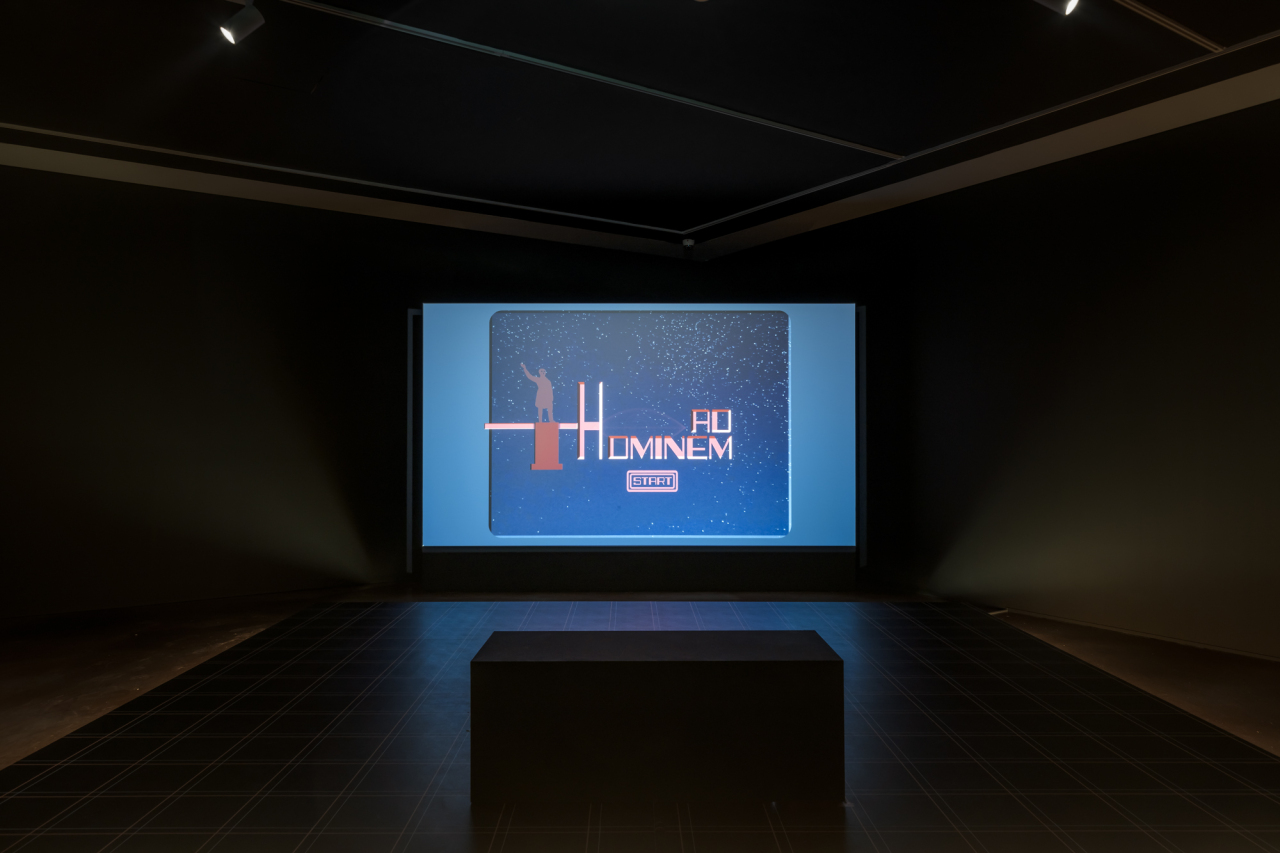 "Ad Hominem” by Alex Verhaest is on display as part of “The Archive of Unattained Future” exhibition at Barakat Seoul. (Barakat Seoul)
In the video game “Ad Hominem,” visitors can play the role of “Change,” who is a time traveler. The four levels of the game, again representing the four utopias, are color coded. Oasis is illustrated by blue-green, Capsule in gray, Bazaar in pink and Hub in navy.

“You are ‘Change.’ That is the concept of the whole exhibition. You are the person who changes the reality. The title ‘Ad Hominem,’ is Latin for ‘argument on the man.’ Utopia is how you look at things whether they are dystopia or utopia, it is your view. Of course our view is based on the view that I have been taught through culture or education,” she said.

“Sofie also basically proposes (in her dissertation) -- of course in a more complex way -- we as humans we speak things that come from ideas that we have learned through other means,” she said. “Where is the limit of deep learning and interpretative learning? I don’t know.”

Based in Brussels and Amsterdam, Verhaest, the winner of the prestigious Golden Nica Ars Electronica, explores the means to communicate contemporary narratives and contemplates artistically the coexistent relationship of humans and machines. Narratives newly analyzed or depicted by Verhaest are presented as interactive images that float in the boundaries between photography, painting and film.

The exhibition runs through July 31. The gallery is closed Mondays.