By Jung Min-kyung
Published : Apr 26, 2022 - 14:25       Updated : Apr 26, 2022 - 17:02
South Korea’s economy expanded by a lackluster 0.7 percent in the first three months of this year, compared with the previous quarter, weighed down by the spread of the omicron variant and the risks stemming from the Ukraine crisis, central bank data showed Tuesday.

Asia’s fourth-largest economy’s growth momentum nearly halved compared with the fourth quarter of 2021, when it saw a 1.2 percent expansion, preliminary data from the Bank of Korea showed. In terms of on-year growth, the economy grew 3.1 percent as of end-March.

The data puts a damper on the government’s and the central bank’s earlier anticipations of a 3 percent growth for this year, with the prolonged risks tied to the COVID-19 pandemic, the Ukraine crisis, and the global supply bottleneck working as setbacks.

The Bank of Korea pointed to slumps in private consumption and facilities investment, which worked as a downward pressure for the economy. But the pressure was offset by the strong recovery in exports, which accounts for half of the economy, the central bank explained, resulting in a deceleration of growth, but narrowly avoiding contraction.

“South Korea’s domestic consumption was weak in the first quarter, dragged down by lackluster private consumption and government spending, but continued recovery on the back of strong exports,” Hwang Sang-pil, a senior BOK official, said.

Private consumption fell by 0.5 percent on-quarter, as expenditures on semi-durable goods such as clothing and footwear and services decreased. Government consumption remained flat, while facilities investment declined 4 percent in the same period.

Despite the growing inflationary pressure here, the BOK painted a rosy outlook for private consumption, saying that the government’s eased quarantine and social distancing rules will contribute to the improvement.

“In April, an increase in private consumption was observed and online consumption has been maintaining a modest growth trend,” Hwang explained. 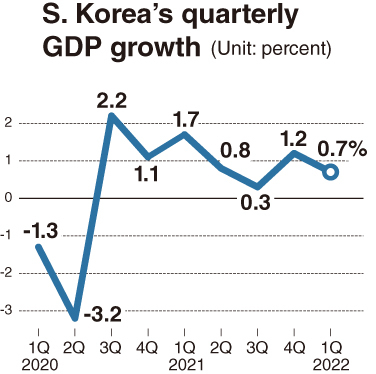 Korea has been struggling with the rising inflation, with onlookers worrying that it might be on the verge of a stagflation. Stagflation is when the inflation is high, but the economic growth is slow.

The International Monetary Fund recently projected inflation in South Korea to hit 4 percent this year, second behind only New Zealand in a list of eight advanced economies in the Asia and Pacific region, in part because of the war in Ukraine.

The BOK raised its benchmark interest rate by a quarter percentage point in mid-April, the fourth rate increase since August last year, when it carried out its first pandemic-era rate hike. The recent series of rate hikes aim to quell inflation. The BOK is to hold its next rate-setting meeting in late May.