Kansong Art Museum reopens after seven years, pledges not to put collection up for auction

The current show is the last chance to view an exhibition at the historic venue before restoration on the 85-year-old main building begins.

The museum had remained closed since the fall of 2014 as it became difficult to accommodate visitors in the aging facility. From 1972 to 2014, the museum held exhibitions twice a year, each highly anticipated exhibition drawing large crowds. From 2014 to 2019, the museum temporarily used Dongdaemun Design Plaza for exhibitions.

The separate storage facility in front of Bohwagak, the main building, was unveiled to the media Saturday. Completed in March, it was built with 4.4 billion won ($3.6 million) in funding from the central government and the Seoul Metropolitan Government in recognition of the museum’s contribution to Korean cultural heritage.

The 982-square-meter storage building includes a conservation laboratory where the museum will collaborate with outside experts to restore damaged artifacts in the museum’s collection. The museum has some 16,000 items in its collection.


Speaking at a press conference held Friday at the museum in Seongbuk-gu, Seoul, Jeon In-geon, the museum director and grandson of the museum founder Jeon Hyung-pil, pledged that the financially struggling museum will not put its cultural artifacts up for auction again.

In May 2020, two Buddhist artifacts, both state-designated treasures, were put on the block. When they failed to find bidders, the National Museum of Korea acquired the items. In January, the museum once again put two Buddhist relics, both state-designated national treasures, up for auction. When they failed to find bidders, Heritage DAO purchased National Treasure No. 73, Portable Shrine of Gilt-Bronze Buddha Triad, and donated 51 percent of the ownership to the museum. It also permanently entrusted the Buddhist relic to the museum for physical exhibitions.

“It was like cutting off my arm when I had to put them on auction to eliminate liabilities,” Jeon said. “We thought we needed a ‘select and focus strategy,’ focusing on calligraphy works and porcelains. Fortunately, we are becoming stable. We will never again sell our collection at auctions.” 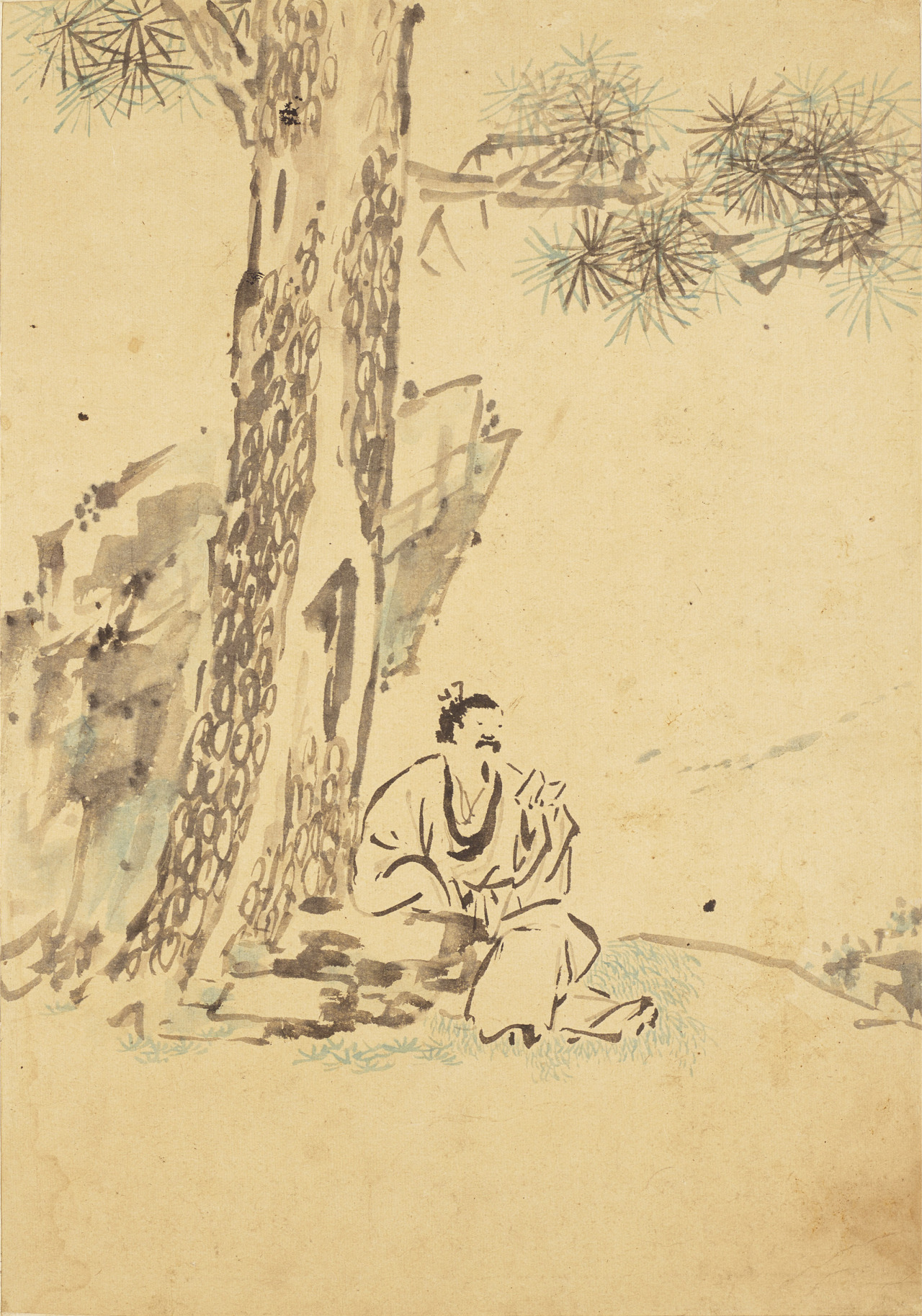 "Reading a Book Under a Pine," a light-colored painting by Yi In-sang (1710-1760) (Kansong Art Museum)
Founded in 1938 by Jeon Hyung-pil -- a wealthy merchant who collected Korean cultural artifacts during Japan’s 1910-45 colonial rule -- the museum was a fortress that helped protect Korean heritage from being taken out from the country by Japanese colonialists.

The name of the museum, Bohwagak, was changed to Kansong Art Museum, adopting the founder’s penname, after his death in 1962. Bohwagak, designed by Korean architect Park Gil-ryong, which literally means a “house that holds glittering treasure.”

“The Restoration and Conservation of the Kansong Collection” exhibit showcases 32 of the museum’s 150 artifacts that have been restored since 2020 with funding by the Cultural Heritage Administration. Among the restored works are “Grapes,” an ink-and-wash painting by Shin Saimdang (1504-1551), “Reading a Book Under a Pine,” a light-colored painting by Yi In-sang (1710-1760) and “Questioning the Moon,” a light-colored painting by Yi Jeong (1554-1626).

Online reservation at the museum’s website is required to visit the exhibition, which will run through June 5. Docent-led guided tours are offered at 11 a.m. and 3 p.m. daily. The guided tours are available in Korean only.

The renovation will begin in June after the exhibition, and is expected to take about three years, according to the museum.