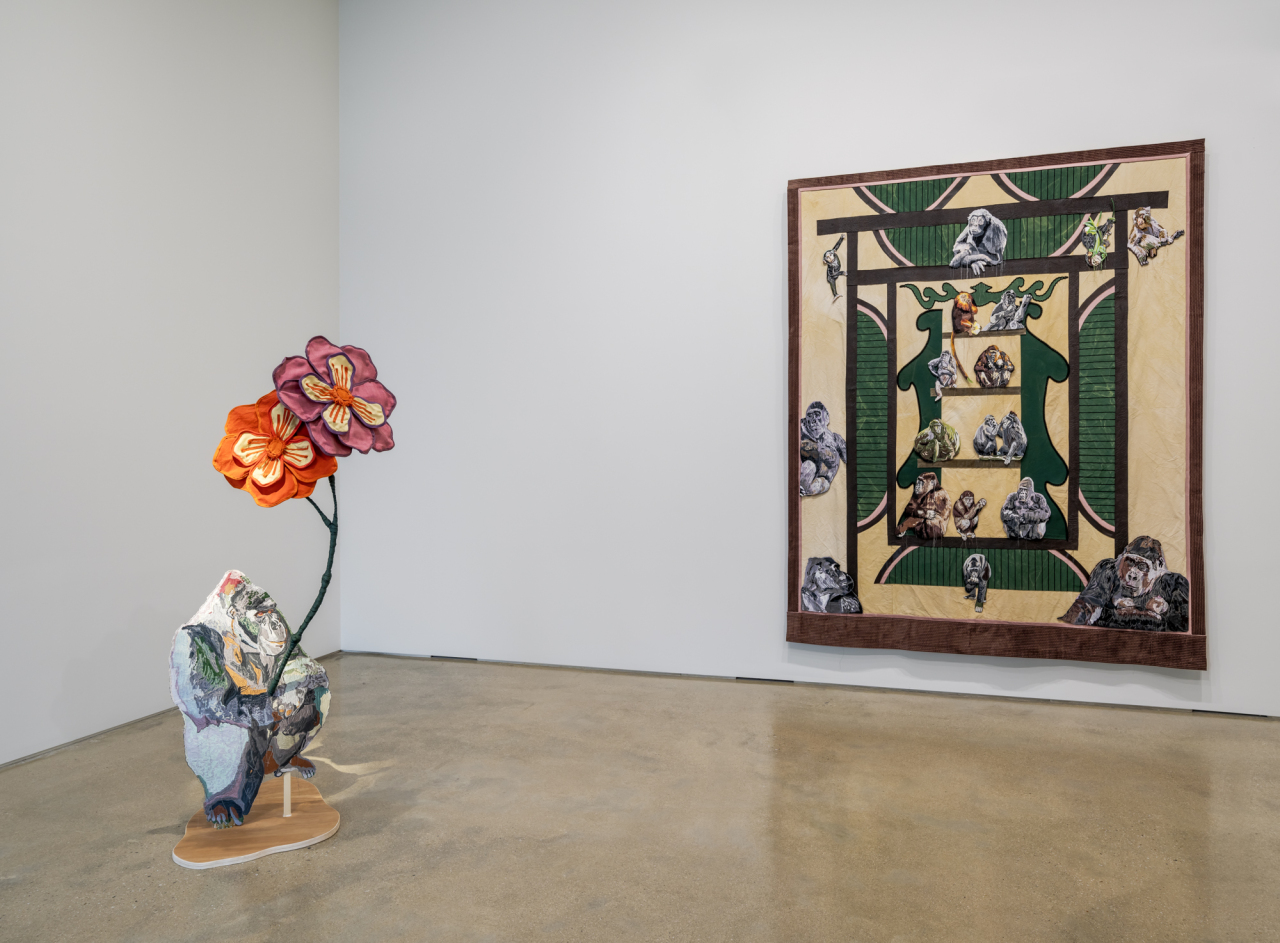 "Ishmael: Even the Gorilla Needs a Flower" and "One Gate between Two Worlds" by Hong Young-in (PKM Gallery)
Strongly believing that visual art has power to influence the human condition, UK-based interdisciplinary artist Hong Young-in has been exploring ways to contribute to the society as an artist.

The exhibition “Young In Hong: We Where” at PKM Gallery is Hong’s first solo show after presenting her work at the 2019 Korea Artist Prize organized by the National Museum of Modern and Contemporary Art, Korea.

Born in 1972, Hong studied at Seoul National University and Goldsmiths College in London and is currently based in Bristol, UK.

At the show, she unveiled eight new works created in 2021, including the sound installation “Thi and Anjan” and a large-scale embroidery work, “One Gate between Two Worlds.” She pays respectful attention to the marginalized voices of humans and animals, attention that is reflected in her art itself and the way she creates her works.
Hong’s use of embroidery is well presented in “One Gate between Two Worlds” and “Woven and Echoed.” Although Hong stays humble, saying she happened to use embroidery for a practical reason, she believes her ties to embroidery is not just a coincidence. As a child, Hong said she had witnessed the military dictatorship in Korea in the late 1970s and 1980s when many marginalized female factory workers lived off embroidery.

“I am interested in history. I never knew when I was in South Korea that I was living in an oppressive society in the 1970s and 1980s. Then I started to realize it was a suppressed and male-dominated society as I look back on the times from a distance, living abroad,” Hong told The Korea Herald.

Her interest in history is also represented in the embroidered work “Looking Down from the Sky” created in 2017. She used silhouettes extracted from photographs of Korean social movements and demonstrations that took place under the military dictatorship to create a musical score. The five sections comprise an introduction, three movements and a cadenza, with each section based on photographs that record six different events. Visitors can listen to the music score by scanning the QR code on the wall. 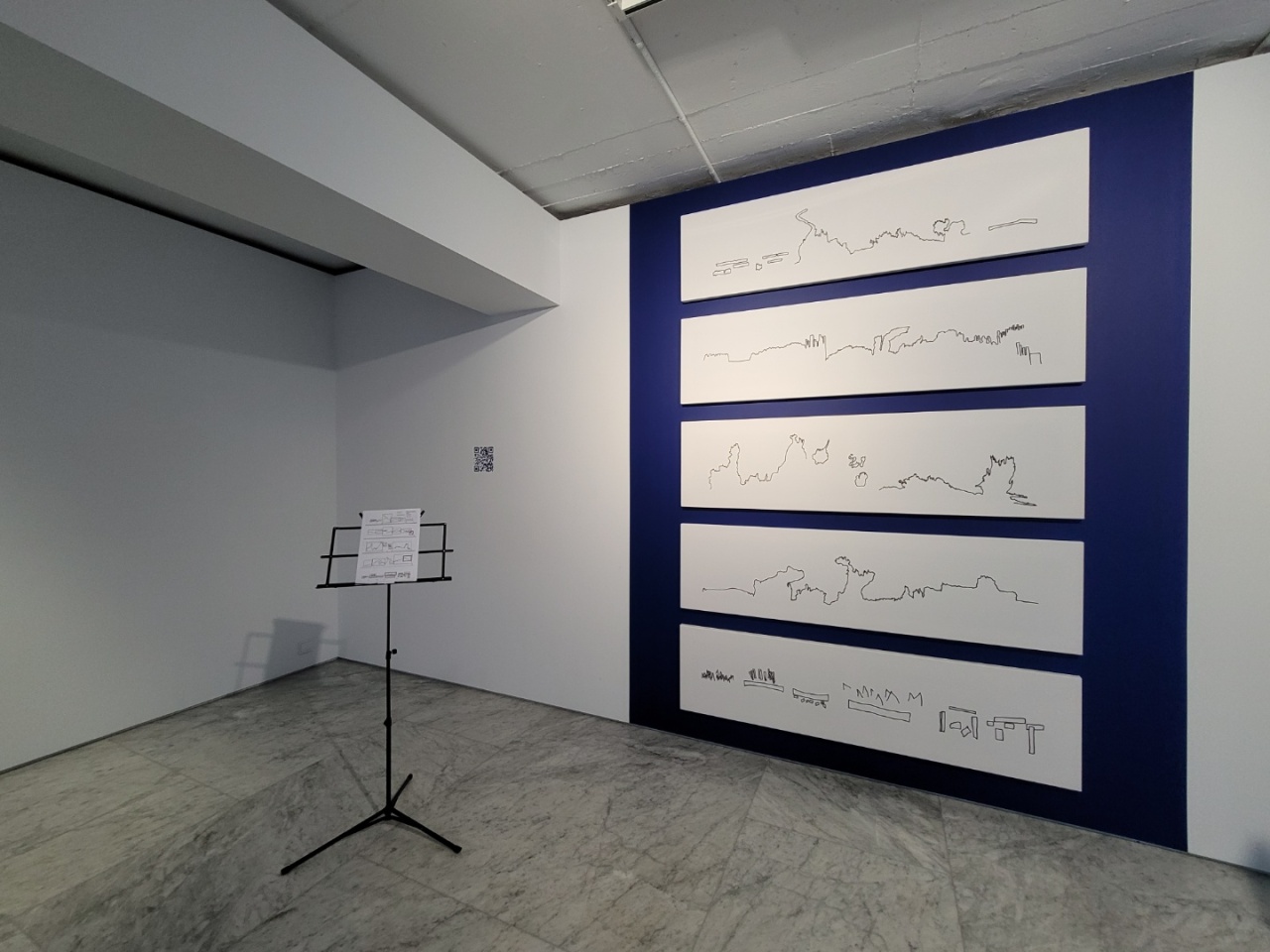 "Looking Down from the Sky" by Hong Young-in (Park Yuna/The Korea Herald)
As an artist whose work encompasses performative elements and textiles, Hong considers “collaboration” as an important notion in her art. However, for Hong, collaboration goes beyond people’s participation in her work.

“Collaboration is not about simply joining in to work together. I always think about the process of how my work could change by working with performers and master craftsmen,” she said. Hong has worked with craft masters Lee Chung-kyung and Park Yeon-hwa on straw woven shoes for elephants which are part of “Thi and Anjan.”

Hong is currently a reader of performance and textiles at Bath School of Art, Film and Media, Bath Spa University in the UK.

The exhibition runs through Feb. 26 at PKM Gallery in Jongno-gu, central Seoul.