PANGYO, South Korea, Feb. 9, 2022 /PRNewswire/ -- When it comes to purchasing a gift card online as a gift, even for the most tech savvies, all the cumbersome steps customers have to complete just to find the receiving end have to go through the same hassle would have shooed them away. But there is a South Korean startup specializing in a turnkey solution for an easier and more pleasurable online gifting experience. And it has just been launched in the United States and Canada. Meet SodaGift (https://sodagift.com/en). 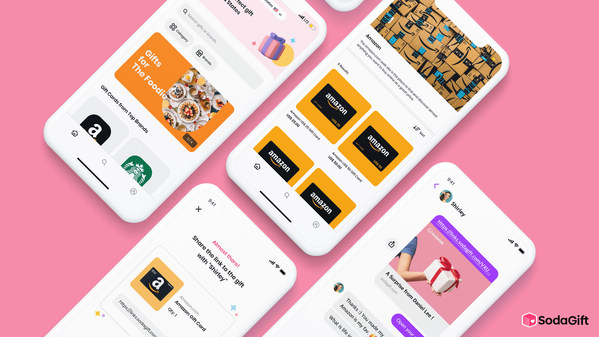 From its incubation period, SodaGift's idea received attention due to the underlying demand and the potential target population. Due to the ever-increasing need for online gifting, SodaGift has met an unprecedented demand both domestically and internationally. With over 300 brands and 3,500 gifts, shoppers around the globe could purchase anything for their friends and family back in South Korea. Not to mention their hassle-free checkout process with no need for a Korean phone number nor Korean debit/credit card. To top it off, their mobile gift allows shoppers to send gift cards via text or email with a few clicks.

Soon after growing the market as a whole and becoming the industry's largest shareholder, SodaGift decided to take on the next milestone: launch a global-wide service. To meet the relentless demand of cross-border gifting, SodaGift has launched their global service that truly transcends borders; shoppers can now gift realtime to USA and Canada from overseas or within USA and Canada. Popular US and Canadian brands such as Amazon, Starbucks, Nike, Tim Horton, and Walmart are all available in the form of a gift card. With this new launch, SodaGift is striving to expand their cross-border services to other countries in the imminent future.

While there are numerous providers offering a similar service, the majority caters to corporate gifting in bulk quantities. On the contrary, SodaGift not only provides bulk purchases but gravitates towards individual purchases with attention to personal details such as including an e-note along with the gift card. And this is only the beginning, as they are preparing to roll out many more exciting features in the soon to come future.