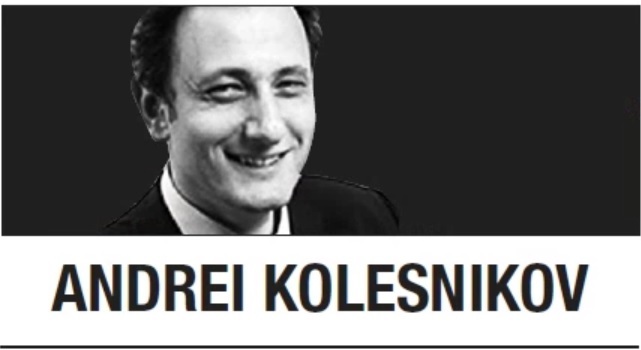 In May 1993, Estonia’s first post-Soviet leader Lennart Meri -- a wise man with bitter experience of life in the Soviet Union -- told the visiting US deputy secretary of state that Estonia urgently needed to join NATO. It was, he said, the only guarantee that Russia wouldn’t invade the Baltic state once a less Western-friendly and authoritarian Russian leader replaced then-President Boris Yeltsin.

Meanwhile, Yeltsin openly warned the US that NATO’s expansion to the east would inevitably lead to an explosion in nationalist and imperialist sentiment in Russia. Some of Meri’s and Yeltsin’s predictions have come true. It took Vladimir Putin, prone to imperial obsession, to awaken Russians’ ultraconservative feelings, complete with phantom pain for the lost Soviet Union. The more the Russian president advances his Make Russia Great Again strategy, the more Russians are convinced that their country was humiliated following the collapse of the Soviet Union.

Yet Putin’s recent buildup of military forces along Ukraine’s border has equally brought out Russians’ fears as tensions heighten. The Pentagon announced Wednesday that about 2,000 US-based troops will be deployed to Poland and Germany, and another 1,000 soldiers from Germany are shifting to Romania, in a show of American commitment to NATO allies. The US says it will not enter Ukraine. The view from Russia isn’t clear-cut.

Russians think highly of their government. In a recent poll, half of the respondents blamed the US and other NATO countries for the escalation in eastern Ukraine. Sixteen percent said Ukraine initiated the escalation, and only 4 percent faulted Russia.

Such patriotic vision has led to an increase in recent years in the number of Russians who believe that the nation has enemies. Most cite the US as the primary foe.

Things can change, however. As soon as international rifts diminish even a little, the attitudes of Russians to everything Western, above all toward the US and the European Union, instantly become less hostile, and vice versa.

Putin’s belligerent rhetoric and behavior have inspired ordinary Russians, but they have also frightened them. They worry about significant military threats from abroad. In recent years, Russians have begun to fear another world war. It’s their second-biggest fear (after that of their loved ones becoming ill), according to a recent survey.

When Russia annexed Crimea in 2014, there was an unprecedented torrent of patriotic sentiment, embodied by Putin, whose ratings soared. The vast majority of Russians believed that reincorporating Crimea -- for many years, part of the Russian republic formerly under the Soviet Union -- simply righted a historical injustice. Although that consensus on Crimea still exists, it no longer inspires Russians to unconditionally support Putin. He can’t invoke that campaign to mobilize ordinary Russians to rally around the flag or boost his ratings again.

A war with Ukraine is no less complex. Indeed, Russians view their neighbor as a satellite of the West, but their opinion isn’t entirely negative. Last year, nearly a quarter of Russians believed their country and Ukraine should be friendly neighbors but still have their own borders. More than half of Russians between ages 18 and 24 have a positive or very positive attitude toward Ukraine. It’s hard to imagine how those young people could be forced to take up arms against their neighbors with that attitude.

In recent years, the Russian public has gotten used to an atmosphere of constant tension. War has become routine and the West is still considered the enemy. But that could evolve rapidly if tensions are dialed back.

In my recent research with focus groups, I found that young people in Russia are very pragmatic about their country’s situation. They’re concentrating on their private lives -- going to school, getting a good job. Some are trying to adapt to political constraints and outwardly showing obedience, while secretly supporting jailed opposition leader Alexei Navalny, even if they don’t show it. They’re not interested in pursuing any war and are not indoctrinated with Putinism.

The patriotic tantrums on television talk shows are mostly geared toward older demographics. Propaganda works, but many young people are immune to it; they’re mostly on social media. Liberal activists, bloggers and journalists are few in number but relatively influential. Take journalist Dmitry Muratov, for example, who won the Nobel Peace Prize last year. A lot of people also watch popular video bloggers such as Yury Dud, who has millions of YouTube subscribers, or follow other outlets like the independent TV channel Dozhd, which the Kremlin has designated as a “foreign agent,” or the liberal Ekho Moskvy radio station.

Most Russians, though, are apathetic. These days, there are fewer ardent supporters of Putin than indifferent ones. It’s far from a given that Russians will equate the autocrat with Russia and Russia’s security with that of the Kremlin’s inner circle. Today’s urbanized Russians don’t want to go and fight for Putin and the Kremlin. Invading Ukraine would not be seen as defending their country, and NATO is not Hitler.