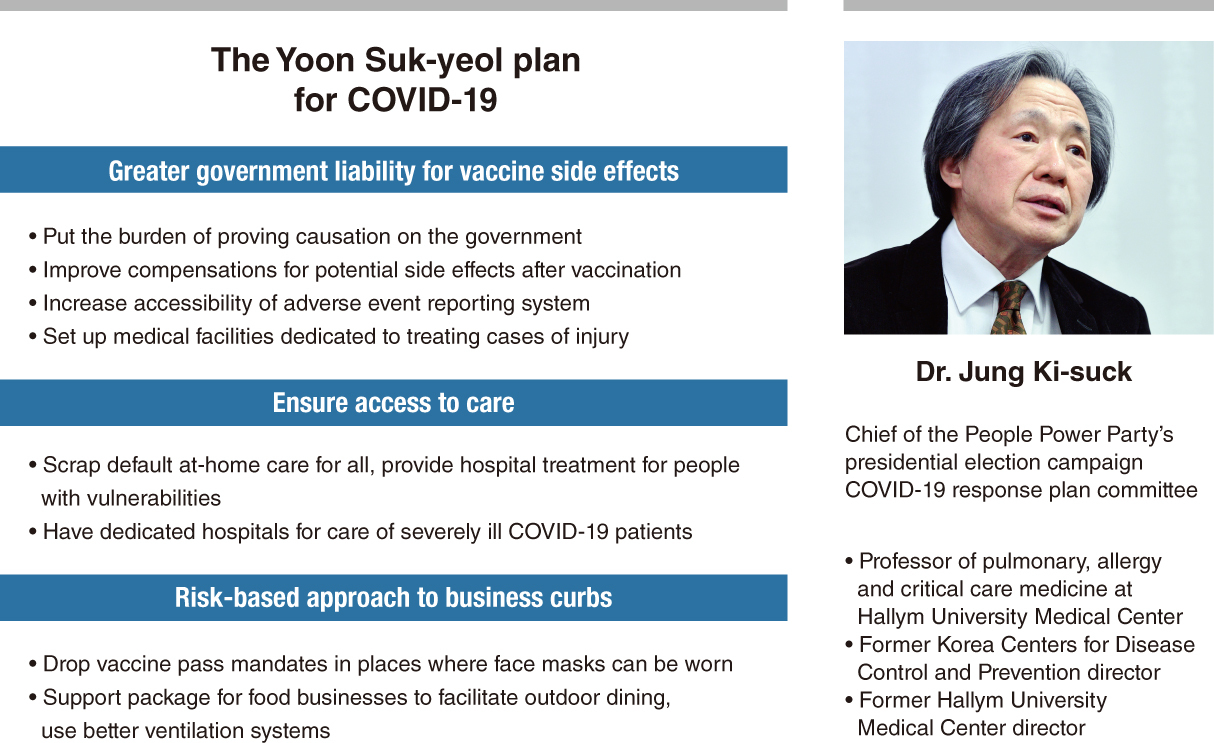 The last two years of the pandemic in South Korea have been punctuated by similar, preventable tragedies, and this will stop with Yoon Suk-yeol as president, according to his top COVID-19 adviser.

Dr. Jung Ki-suck, who served as the director of the Korea Centers for Disease Control and Prevention from 2016-17 in the immediate aftermath of the Middle East respiratory syndrome outbreak, joined the main opposition People Power Party candidate’s campaign in December.

On his role as the chief adviser and the head of Yoon’s COVID-19 response plan committee, Jung told The Korea Herald, “From the way we view it, each wave was a repeat of the mistakes made the during the last wave.”

He said that the Korean people have shown “incredible compliance” with the government policies, from face mask-wearing to vaccine program.

“Under the right leadership, Korea can navigate the pandemic more safely,” he said.

“Back in December, unprecedented numbers of patients died before they could get to a hospital. Then the government pulled some strings and now we have 2,300 critical care beds ready. We didn’t need to hire more doctors or build hospitals to do that -- we already had all the resources, and yet somehow didn’t.”

No patient should ever have to die while waiting for a hospital bed, and that goal will be put front and center of the medical response under Yoon, he said.

“The default at-home care for patients of all ages and vulnerabilities needs to go,” he said. “People at increased risk of severe illness should be able to see a doctor, even if they themselves may not report feeling unwell at the time of diagnosis, because the disease can progress silently.”

He pointed out that age being the only guideline for determining risk, as it currently is, was flawed. “Age is not the only risk factor in COVID-19,” he said. “Access to care should be ensured for younger people with certain medical conditions.”

To combat bed shortages, Jung proposed having hospitals dedicated solely to the care of severely ill patients. This was how Daegu handled its patients during the initial wave of the pandemic in early 2020.

On the rival ruling party‘s pledge to build more public hospitals, Jung argued, “In Korea, all forms of medical practice, private and public, are public health. That’s because of universal coverage by the national health insurance.”

Instead, Korea should find ways to better utilize the public hospitals it already has, he said. Public hospitals can be mobilized to take in patients with moderate illnesses, while larger, private hospitals look after sicker patients.

Jung said while Korea boasts one of highest vaccine rates anywhere, compensation for rare but serious injuries has come sparingly.

“In asking people to comply with the vaccine campaign, the government should compensate for possible harm following vaccination quickly and generously,” he said. “The burden of proving causation, providing treatment and costs for that treatment should fall on the government.”

As for vaccine pass mandates, there would be no use for them in places where face masks are worn. People who have experienced side effects after a first dose of the vaccine would also be exempt from the requirement.

He said for the pandemic response to be sustainable in the long run, subjecting businesses to curbs indiscriminately would not work. As long as the science shows it to be safe, businesses should be able to operate.

“Not all restaurants need to close at 9 or 10 p.m. for instance. Outdoor tables can serve customers at any hour of the day,” he said. The support package being put forth for food businesses, among those hardest hit by pandemic-related curbs, would include costs for equipment for safer dining services.

He said that Korea’s abilities to make decisions quickly during crisis points were compromised by the lack of a centralized response.

“In other words, there are too many cooks in the kitchen,” he said. “Why does the interior minister have a say in whether rapid tests are deployed, for example?”

The Health Ministry should be in charge of administrative operations while the Korea Disease Control and Prevention Agency orchestrates disease surveillance, vaccinations, patient management and so forth, he said.

“When there’s a fire, we let the fire department do their job. The same logic should apply with public health crisis like COVID-19,” he said. “That’s the kind of pandemic leadership that we need, and one that the Yoon campaign envisions -- following the science.”