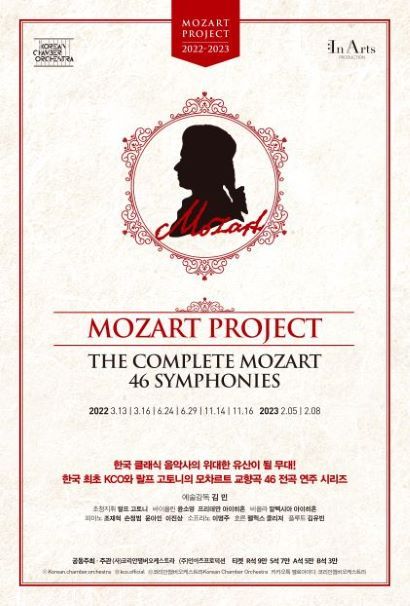 The Korean Chamber Orchestra on Friday said it is set to resume hosting eight all-Mozart concerts next month after the project was halted due to the COVID-19 pandemic.

Under the Mozart Project, the KCO aims to perform all 46 symphonies by the Austrian composer.

Led by Finnish-German pianist and conductor Ralf Gothoni and music director Kim Min, the KCO will take the composer’s masterpieces on stage in eight concerts from March 13 to Feb. 8, 2023.

The orchestra kicked off the 10-concert series on Dec. 28, 2019, as part of commemorating its 50th year anniversary, but it was put on hold after the second concert in January 2020 amid the COVID-19 pandemic.

Just like the first concert, the shows will present several of Mozart’s symphonies in collaboration with domestic and international musicians. Yoon A-in will play Piano Concerto No. 20 in D Minor, K. 466 on June 24 and pianist Sohn Jeung-beum will perform Piano Concerto No. 9 in E-flat major K. 271 “Jeunehomme” on June 29.

For its ninth concert in February 2023, flutist Kim Yubeen will play Flute Concerto No. 1, K.313. The last concert will feature Piano Concerto No. 23 in A major K. 488 performed by pianist Cho Jae-hyuck.