‘Tech-driven flexibility’: What are Lee Jae-myung’s plans for pandemic? 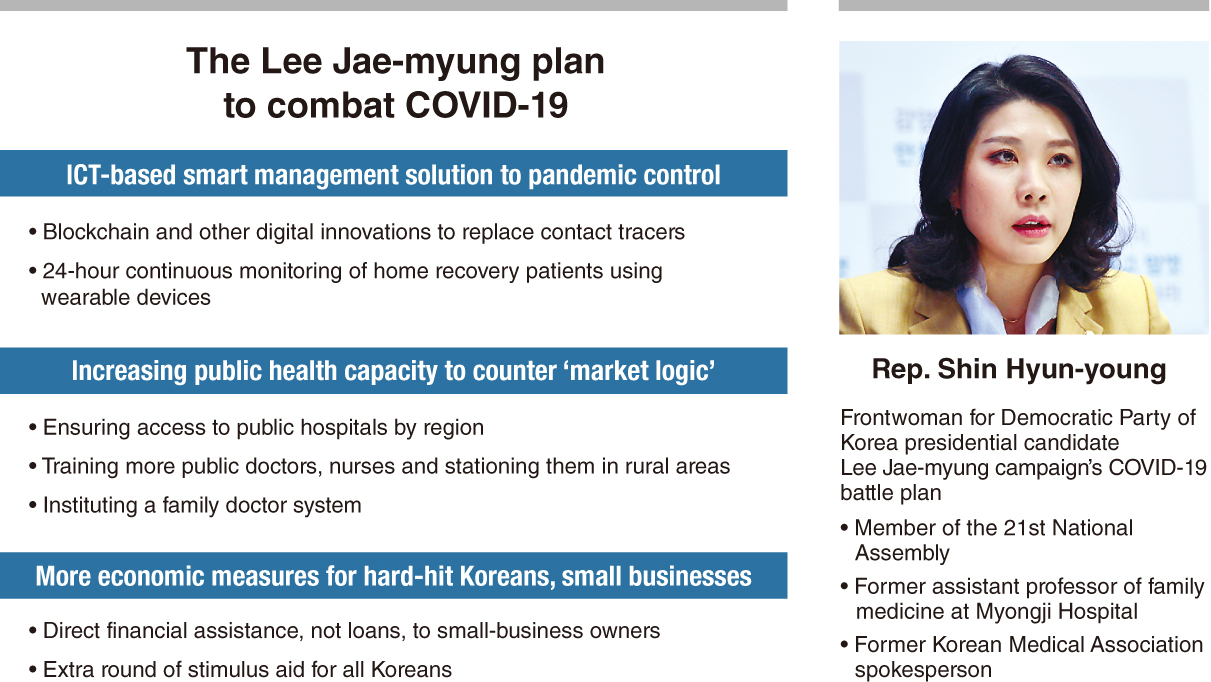 South Koreans can expect a mellower third year of the pandemic, enabled by greater use of technology, with Lee Jae-myung in charge, according to the frontwoman for the Democratic Party of Korea presidential candidate’s COVID-19 response team.

Rep. Shin Hyun-young, who is leading the ruling Democratic Party of Korea’s COVID-19 emergency response headquarters, told The Korea Herald that “Lee Jae-myung will make the most of technology to allow for a flexible response to the pandemic that doesn’t strain people’s lives like we have so far.”

The COVID-19 office within the campaign was set up on Dec. 8 at the peak of the hospital bed crisis that left dozens to die at home without ever getting care, nearly two months after Lee launched his presidential bid in October.

In a series of initial meetings held following the headquarters’ launch, Lee escalated his promises for getting the pandemic under control, calling on the current administration to pause its return-to-normal plans and reintroduce restrictions.

On the criticism that the campaign has failed to keep the focus on the nation’s response to the pandemic, overshadowed by other issues that have become election hot potatoes like gender, Shin begged to differ.

“With or without the headquarters, the Democratic Party has consistently worked to help the nation rise from the crisis, ensuring that the government is doing its job right, with my office at the center,” she said.

“The difference now, with a dedicated organization, is that we’re more aggressive in getting our messaging across.”

The two recurring themes in Lee’s COVID-19 promises made along the campaign trail are public health capacity-building and smart technologies in pandemic surveillance. “Flexibility and digital innovation are keywords that define the Lee Jae-myung plan to combat COVID-19,” Shin said.

In an address on Dec. 31 last year, Lee said he would “turn the COVID-19 crisis into an opportunity to renovate the public health system in Korea.”

“Market logic has no place when it comes to people’s lives and health. To prepare for future health emergencies, Korea needs more public hospitals and public health workforce,” he said.

He said in another meeting held last week, “The Lee Jae-myung brand of pandemic response will be more flexible. By deploying information technology in disease surveillance and patient monitoring, we can restore normal life with fewer sacrifices.”

On the inevitable strain on the medical system brought on by the omicron variant, Shin again stressed the need for a “smart” response system.

“From contact tracing to bed assignment, a lot of important tasks are still done manually. I’ve seen health officials and contact tracers take photos of patient information and share them on messenger apps. When omicron starts driving patient numbers to five digits, that is not going to work,” she said.

As an alternative to strict social distancing, the campaign proposes digitizing contact tracing with blockchain technologies to enhance data security and distributing wearables for monitoring home recovery patients so that there’s no neglect.

The concrete steps for realizing these plans or other aspects of pandemic response or preparedness, however, are still missing.

As of 6 p.m. Wednesday, the official campaign website does not carry any COVID-19-related pledges aside from its economic relief plan, which includes payouts for small businesses and a stimulus package for all Koreans.

Shin admitted that details of the campaign’s COVID-19 policies are still in the works.

“The campaign stance is that vaccine passes, or health passes, should not work in a way that penalizes people or coerces them into taking the shot,” she said. “But applying the passes among groups that are at increased risk makes sense.”

But on a daily basis the campaign was pursuing changes to improve pandemic measures at both micro and macro levels, Shin said.

She said that for instance, the campaign was currently pushing for introducing PCR tests that return results faster. “Right now you need to wait until the next day to get the results. That can be done faster with the new tests,” she said.

On compensating vaccine injury reports, she said the campaign stands by the principle of acting on medical evidence. “The conditions’ link to vaccination has to be established,” she said.

As for the point of shedding face masks, she took a cautious tone. “Compliance with mask-wearing is incredibly high in Korea. I think the majority of people would rather be careful until we know it’s safe,” she said.

She added that the Democratic Party’s approach to the issue stands out from those of other parties in that the ruling party has “an expert as a lawmaker in charge of shaping COVID-19 policies.” “The presence of an insider expert allows for teamwork and chemistry that you can’t emulate as an outside adviser,” she said.