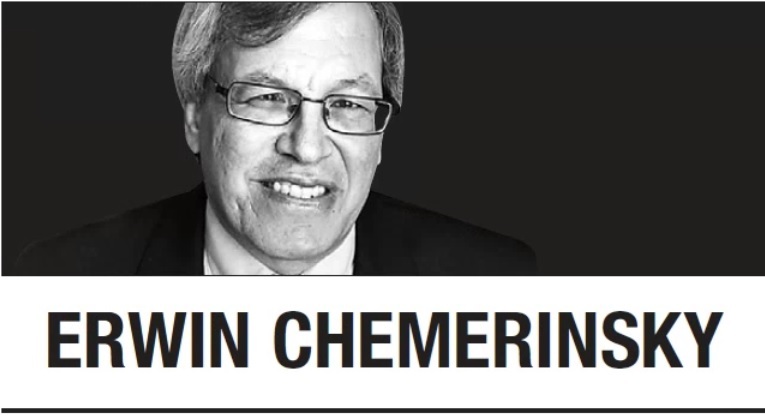 Under well-established law, the Biden administration’s vaccination mandates are clearly legal. But the politicization of the pandemic and vaccines makes it doubtful whether the Supreme Court will uphold them. Cases involving two regulations that impose vaccination requirements on workers will go before the court on Jan. 7.

One rule calls for employers with more than 100 workers to require vaccinations or weekly COVID-19 tests of their employees. The Occupational Safety and Health Administration, or OSHA, created the workplace mandate as an emergency and temporary fix, which can be adopted when “employees are exposed to grave danger from exposure to substances or agents determined to be toxic or physically harmful or from new hazards.”

On Dec. 17, the US 6th Circuit Court of Appeals ruled in favor of the Biden administration and upheld the rule. The court explained that given “OSHA’s clear and exercised authority to regulate viruses,” the agency “necessarily has the authority to regulate infectious diseases that are not unique to the workplace.” In addition, the court said OSHA demonstrated “the pervasive danger” that COVID-19 poses to employees -- the unvaccinated, in particular -- in their workplaces.

This is clearly correct. The federal statute gives OSHA the ability to protect workers from “grave danger from exposure” to “new hazards.” As the 6th Circuit observed, more than 800,000 Americans have died of COVID, and its presence in the workplace is a serious risk to employees.

The other regulation the Supreme Court will consider was adopted by the Centers for Medicare & Medicaid Services. It entails requiring that all health care workers at facilities that participate in the Medicare and Medicaid programs be fully vaccinated against COVID-19, unless they’re eligible for a medical or religious exemption. Twenty-six states, all led by Republican officials, brought several lawsuits challenging this rule. Two federal appellate courts deemed the rule invalid, while one federal court of appeals upheld it.

As a matter of law, this second rule should be upheld as well. As the US 11th Circuit Court of Appeals, which ruled in favor of the Biden administration, said: “Health care workers have long been required to obtain inoculations for infectious diseases,” such as measles, rubella and mumps, because vaccination is a “common-sense measure designed to prevent health care workers, whose job it is to improve patients’ health, from making them sicker.” The federal government can always set conditions on entities receiving federal funds.

The Supreme Court was asked to issue emergency orders in these cases. Without waiting for a full briefing on those requests, however, the justices took the very unusual step of granting review on both regulations and scheduled the cases for expedited oral arguments. The issues before the court are likely to be primarily about the statutory authority of OSHA and the Centers for Medicare & Medicaid Services to issue the regulations, rather than the constitutionality of the rules.

These should be easy cases, especially for the conservative justices, who profess that statutes should be interpreted solely based on their plain language. The laws in question give federal agencies the authority to adopt these rules. Firmly established law also requires judicial deference to agency decisions, which certainly should mean deference to the government when it takes emergency action to protect public health in a pandemic.

But if I were a betting person, I’d wager against the Biden administration. In the lower courts, the judges almost always split along partisan lines in these cases. Judges appointed by Democratic presidents voted to uphold the regulations, and those appointed by Republican presidents voted to strike them down. For example, the 11th Circuit decision upholding the Medicare and Medicaid regulation was 2 to 1, divided exactly in that way.

This reflects the larger political divide in the United States about COVID and vaccinations. A study in December found that 4 in 10 Republicans remain unvaccinated, compared with just 1 in 10 Democrats.

The tragedy of the last two years has included bizarre political wrangling around a pandemic. The efficacy of vaccinations and masks in preventing COVID is not in question, yet a large political chasm has developed with deadly consequences. The 13 states with the highest hospitalization rate per 100,000 residents, and the 15 states with the highest percentage of deaths per 100,000 people, all have Republican governors.

The hope must be that the Supreme Court will transcend the politics of COVID and simply follow the clear law to uphold the Biden administration’s vaccination mandates. What a wonderful surprise that would be -- to help protect the health of many people and limit the spread of a devastating communicable disease.