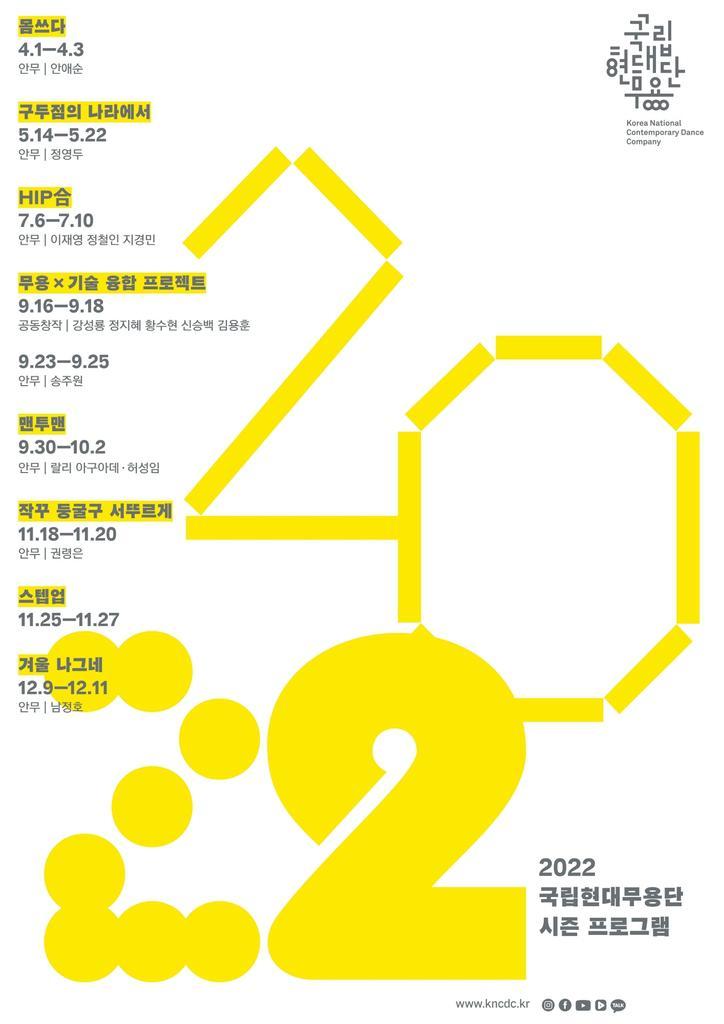 The Korea National Contemporary Dance Company will offer eight programs, ranging from new creations to its signature repertoire, this year.

KNCDC’s first performance is set to kick off in April with “Writing Using,” which is created by renowned choreographer Ahn Ae-soon, KNCDC’s second artistic director, according to the state dance company Tuesday. The production will show the story of the feelings of the dancers’ bodies through dance.

“Tiny, Round, Clumsy,” created by choreographer Kwon Lyon-eun, was originally introduced last year as part of “One Year After,” a triple-bill project by three choreographers, whose performances were cancelled due to the COVID-19 pandemic. The show, which explores the choreographer’s process and shift in perspective over the past year with the keywords ‘cancel’ and ‘stop,’ is expanded and will hit the stage in November.

Just Like Kwon, Lali Ayguadé will bring back “Sublimation,” which was also part of “One Year Later.” This time the Spanish dancer will perform “Sublimation” in a two-bill program titled “Man To Man” with Her Sung-im who will collaborate with “Husk Husk,” a two-men group that creates sound for performances.

There will be performances that showcase the experimental spirit of the company with “HIPHOP” and “Step Up.” July will see the staging of “HIPHOP,” a collaboration project where street dances hip-hop, b-boying, popping, locking and more meets contemporary dance and Korean traditional music.

In September, “DanceXTech Project” will test a new possibility of contemporary dance when combined with cutting-edge technologies. “Step Up” is a project by KNCDC developing sustainable dance repertories initiated in 2018 and this year two selected dance troupes will introduce experimental contemporary dance in November.

“In the Land of Punctuation,” KNCDC’s second repertory for children and teenagers, returns for a younger audience in May.

This year‘s production will feature Nam Jeong-ho, the current artistic director of the KNCDC. Nam, a former professor at the Korea National University of Arts and a member of French dance troupe Cie Jean Gaudin Dance Company in the 1980s, has been leading the group since February 2020.