Fundraising via IPO hits $10b in Korea’s record year

The combined IPO proceeds of Korean companies, including special purpose acquisition companies, through the newly-issued shares between January and September came to 11.9 trillion won ($10.2 billion), up 478.3 percent from the previous year, according to data compiled by the Financial Supervisory Service. The figure excludes sales of existing shares by private shareholders.

This is out of 182.8 trillion won fundraising via new stocks and bonds, the data also showed.

The year-to-date fundraising volume via IPO activities has already exceeded the full-year record-high figure in 2017.

This is the latest indication that Korea‘s IPO market is headed for the record year, buoyed by mega IPOs. 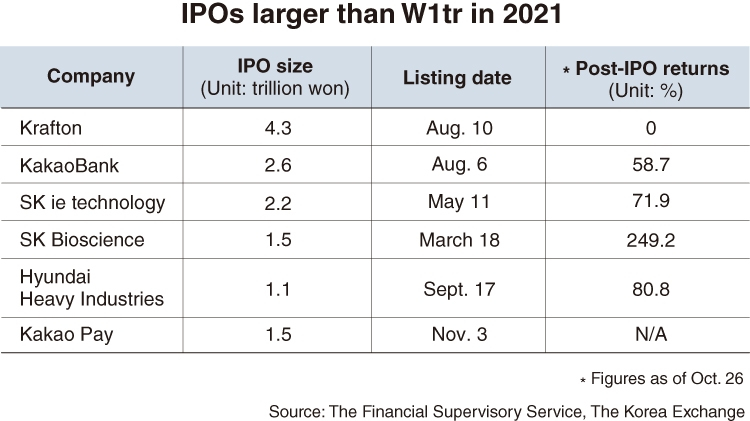 Such blockbuster IPOs were largely lucrative to investors. Until Tuesday, SK Bioscience rose 250 percent from the IPO price since its March listing, while Hyundai Heavy jumped 80 percent in a month after September debut. SK ie technology climbed up 72 percent and KakaoBank soared 59 percent, respectively.

So far, 14 companies went to the KRX’s main board Kospi, the KRX data also showed.

In addition, Kakao Pay, a financial technology company mainly dedicated to mobile payment, is scheduled to complete its 1.5 trillion-won IPO Thursday, which was 29.6 times oversubscribed by retail investors.