Korea’s mobile carriers to accept preorders for the iPhone 13 from Friday, with the official release date slated for Oct. 8

By Yang Sung-jin
Published : Sept 29, 2021 - 18:14       Updated : Oct 6, 2021 - 14:19
With Apple set to launch the iPhone 13 in South Korea in early October, Samsung Electronics appears under pressure to safeguard its share not only on its home turf, but also in the increasingly competitive global smartphone market.

Korea’s major mobile carriers plan to accept preorders for the iPhone 13 from Friday, with the official release date slated for Oct. 8, heralding a new round of competition among smartphone makers, especially Samsung Electronics which holds a firm grip on the domestic market.

The Korean launch comes two weeks after the US tech giant released the new smartphone models in over 30 countries, including the US, China and Japan.

Local media outlet the Electronic Times reported that Apple had contacted mobile carriers here to see whether Korea could make it in the first group of countries to get the new iPhone models, reflecting the wider availability of 5G network and soaring sales of Apple products.

But the plan reportedly did not materialize as the first-tier launch date of Sept. 24 was too tight for Korean carriers to prepare marketing and handle preorders due to the Chuseok holiday, the Korean equivalent of Thanksgiving, from Sept. 18 to Sept. 22.

Demand for the new iPhone models outside of Korea is high, leading to delays in delivery in many countries. For the popular iPhone 13 Pro models, customers have to wait three to four weeks to get the phones.

The runaway popularity of the new iPhone 13 models in the first group of countries heralds a similar reaction in Korea, though it remains to be seen how many local customers will embrace Apple‘s offering.

Market watchers said Samsung Electronics gained a firm foothold among Korean Android phone users with the Galaxy Z Fold3 and the Galaxy Z Flip3 that were released on Aug. 27 -- at lower prices than last year as part of aggressive moves to help solidify the budding foldable market.

Apple’s launch of the iPhone 13 comes at a time when Koreans expect economic conditions to improve in line with the country’s vaccination campaign aimed at introducing a scheme for “living with coronavirus” that would ease distancing rules.

“There was demand from Korean customers of the Apple smartphones who have been waiting for a new 5G model, so the new option of the iPhone 13 would meet the pent-up demand,” said a sales representative at a smartphone retailer.

Korea’s three mobile carriers are getting ready to ride the uptrend for the iPhone 13. SK Telecom, for instance, offers one-day delivery of the new iPhone models -- Oct. 8 or Oct. 9 -- for those who preorder, along with discount coupons for accessories, bonus gifts and collaboration goods.

KT also provides midnight delivery for the first 1,000 preorders, together with coupon packages of up to 210,000 won ($177). LG U+ is set to hold a lottery for those who make preorders, offering Apple products like the iPad Pro as prizes.

Apple retains a premium brand image with its iPhone models among Korean customers. Even though the iPhones are pricier than Samsung’s Galaxy models in consideration of the differences in memory, storage and other functionalities, Apple commands a strong fan base, thanks partly to the refined design and simpler user interface.

Many potential iPhone customers in Korea are said to be using Samsung’s Galaxy largely because of the latter’s convenient Samsung Pay and call-recording function, neither of which is available on Apple phones.

Speculation has long been brewing that Apple might launch its own mobile payment system, but there is no sign of such a move yet, disappointing Korean iPhone users who regard the absence of Apple Pay as one of the most regrettable elements.

Online retailers are betting that the iPhone will bring more revenue this year as a growing number among the younger generation go for online orders that are not tied down to long-term subscription plans with specific carriers.

Lotte On, an online retail unit of Lotte Group, said sales of smartphones soared tenfold in August compared to the year-earlier period, and 80 percent of sales involved handsets without a mandatory subscription to carriers. Lotte On said those in their 20s and 30s are leading the trend, reflecting their preferences for more affordable pricing that bypasses complex distribution networks. 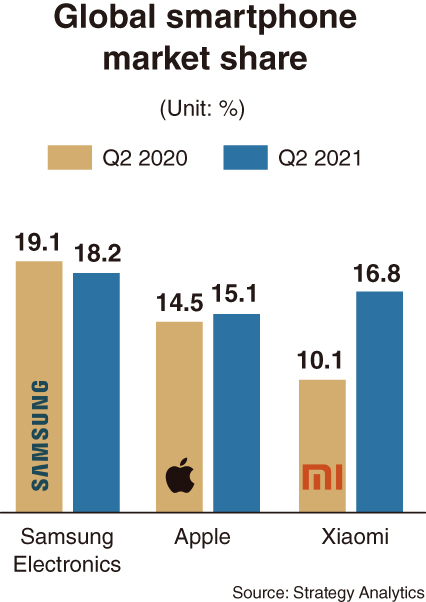 In the fall, Samsung aims to expand the foldable phone market with its latest models, taking on global rivals Apple and Xiaomi.

Samsung scored an 18.2 percent share in the global smartphone market in the second quarter this year, putting them at the top of the ranking, according to market research firm Strategy Analytics, but the figure marks a decrease of 0.9 percentage point from a year earlier.

As smartphone makers tend to avoid the slow second quarter for the launch of new models, the third and fourth quarters are usually a cutthroat period, especially toward the end of the year.

Apple’s advance in the Chinese market is noticeable, with reports of higher-than-expected preorder sales of the iPhone 13. Xiaomi also poses a formidable challenge with its affordable yet powerful models. Xiaomi shipped 12.7 million smartphones in Europe in the second quarter, outpacing Samsung and Apple in the region.

Faced with fierce competition, Samsung is rumored to be considering an early launch of the Galaxy S22. But local media outlets reported the Galaxy S22 is unlikely to be introduced within this year, as Samsung is fully engaged in marketing for its foldable models both at home and abroad.

The protracted pandemic could put a drag on Samsung’s expansion strategy. The relatively sluggish sales of Samsung phones in the April-June period were sparked by coronavirus-related disruptions at its manufacturing plant in Vietnam.