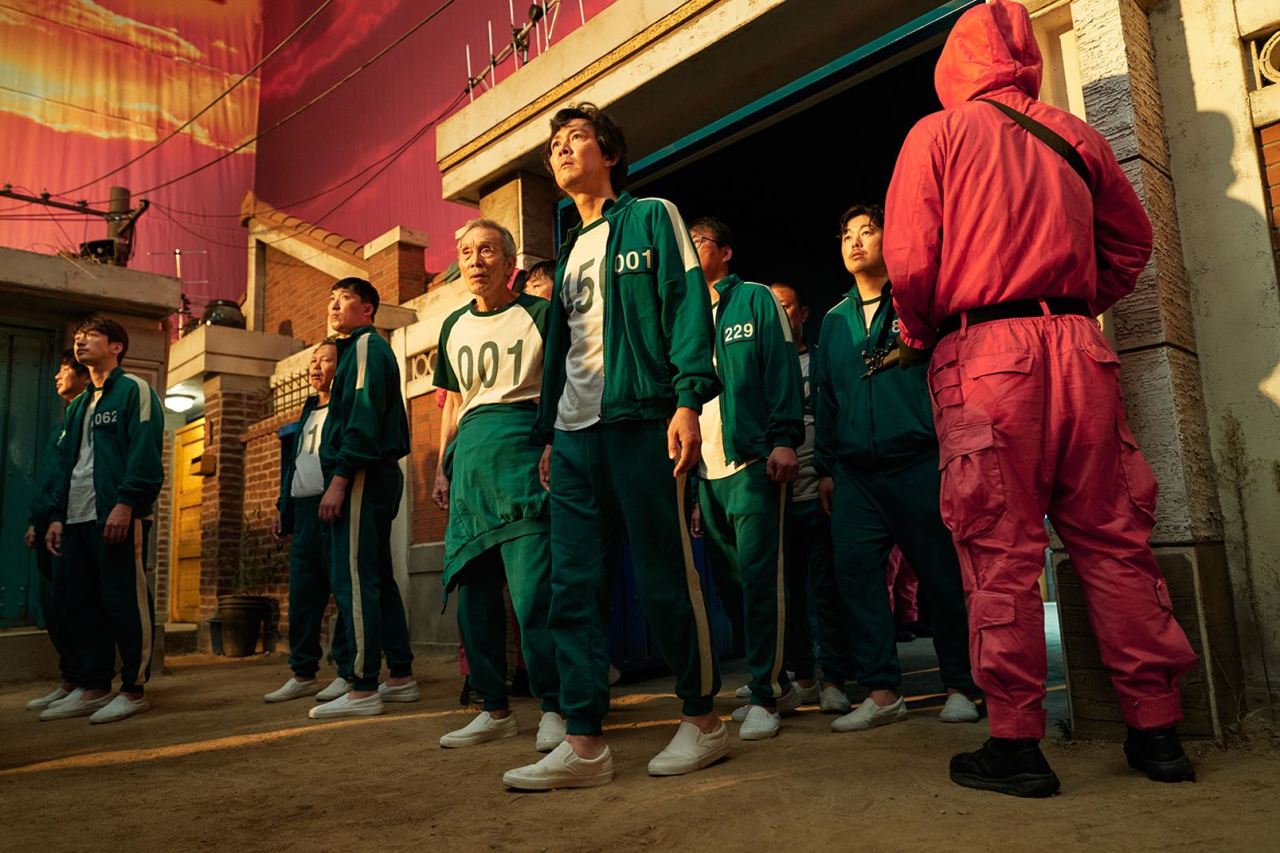 "Squid Game" (Netflix Korea)
For South Koreans who were children in the 1970s and 1980s, the phrase “squid game” is likely to evoke a mix of thrills and nostalgia. The tag game on a squid-shaped board drawn in the dirt was fairly tough to play -- sometimes brutal to the point of causing injury -- but it remained hugely popular, as making it to the final goal area after physically clashing with those on the defense was nothing if not exhilarating.

Hwang Dong-hyuk, the director of “Squid Game,” is now enjoying the euphoria that the winning teams in the childhood game must have felt. The nine-episode Korean thriller, released Sept. 17, has soared to the No. 1 slot on Netflix’s global TV show list.

The series introduces a twisted adult version of the old Korean game: 456 people, all of whom struggle with financial troubles, are thrown into a sequence of life-or-death battles to win the tantalizing prize of 45.6 billion won ($38.8 million).

“Squid Game” offers a highly addictive plot that will easily satisfy binge-watchers, but is not suitable for the fainthearted as it features plenty of violent scenes throughout.

The level of violence in the Netflix series, however, would have been almost impossible to execute if it had been produced on a Korean platform. “In depicting a survival game, the element of violence is inevitable,” said director Hwang at a Sept. 15 press conference. “Because Netflix did not put a limit (on the level of violence), I was able to freely work on the series.”

It was in 2009 that Hwang wrote the initial screenplay for “Squid Game.” At the time, production houses and investors were skeptical about the commercial potential of the series, so the project was forgotten.

In 2019, things changed dramatically. In a decade, viewers’ preferences had shifted, raising the commercial odds for Hwang’s script. That change was evident as Netflix unveiled a plan to turn Hwang’s screenplay into an original Korean series, then titled “Round Six.”

The huge success of “Squid Game” both at home and abroad follows the strong reception of another Korean original series: “D.P.,” released Aug. 27. The adaptation of the Korean webtoon series, which revolves around the Korean Army’s military police, sparked a wave of disputes about military practices here and the military’s history of abuse scandals.

The buzz generated by one Korean series after another on Netflix is telling. The streaming service has played an unparalleled role in bringing K-content to a wider range of audiences around the world.

Netflix’s total subscriber base worldwide is estimated at 209 million, and the number of Korean subscribers was 9.1 million as of July. Well-made Korean dramas and films on Netflix could lead to an exponential growth of viewers across the globe, bringing in sizable profits that could in turn attract more talent from the domestic film and drama production industries.

Last year, Netflix enjoyed a rapid expansion as people sought a visual shelter in streaming services amid the pandemic. This year, however, Netflix is having a rough time due to a slowdown in subscriber growth, as the stubborn spread of COVID-19 and its variants continues to cloud the future outlook.

In the second quarter, the streaming service provider lost some 400,000 subscribers in the US and Canada while it saw over 1 million new subscribers signing up in the Asia-Pacific region.

Against this backdrop, the Asia-Pacific region in general and Korea in particular are crucial for Netflix, which is keen to boost growth in terms of subscribers and original series production.

For Netflix, Korean programming is cost-effective and, if successful, highly lucrative. The nine episodes of “Squid Game,” for instance, are estimated to have cost around 20 billion won ($17 million) in total, a far smaller production budget compared with other blockbuster series on the streaming platform.

Netflix, which entered the Korean market in January 2016, leads the streaming business here. It is also actively investing in Korean content, recognizing its high-octane appeal in Asia and beyond.

This year alone, Netflix plans to invest $500 million in Korean films and original series. The move marks a dramatic increase in investment given that it spent a total of $700 million to produce some 80 original Korean programs in the past five years.

With Netflix flexing its content muscles, another global streaming giant, Disney+, is scheduled to launch its service Nov. 12, signaling heightened competition in the streaming and terrestrial TV markets.

LG U+, a Korean mobile carrier, said Sunday that it had signed a deal with Walt Disney Company Korea to deliver Disney+ content on its U+tv platform. The partnership is expected to strengthen the streaming lineup of LG U+, which already bundles Netflix with its IPTV service.

While Netflix and Disney+ will compete with their rich content pool, Korean streaming operators are under pressure to devise new strategies to retain subscribers and diversify their content. Wavve, a Korean streaming platform jointly run by major TV stations and SK Telecom, said earlier that it would invest a total of 1 trillion won to beef up its programming through 2025.

Tving, run by entertainment and media firm CJ ENM, pulled off a big increase in its subscriber base in the first quarter thanks to its partnership with Naver. Spurred by rivals’ belated investment plans, Tving also decided to pour 400 billion won into content production by 2024.

Streaming service Seezn of KT is set to spend 400 billion won on expanding its lineup by 2023.

According to the Korea Communications Commission, the three terrestrial networks recorded a combined viewership of 39 percent in 2019, down from 48.8 percent in 2016. If the current trend continues, the terrestrial stations could be eclipsed by major streaming platforms in terms of viewership, following a path seen in the fiercely competitive US TV market.

As for competition, director Hwang Dong-hyuk said survival game programs usually focus on winners, but “Squid Game” spotlights losers. His words may do little to comfort local companies trailing behind in the brutal streaming game.