Questions raised over duopoly of Naver and Kakao in platform industry

The so-called “anti-Google bill” revises the Telecommunications Business Act to stop the US-based Google from forcing local app developers to use its own payment system for in-app purchases.

Naver, the country’s leading online platform, was established as a web portal in 1999. Spearheading search engine technology, news portal, webtoon and other essential digital services, Naver has emerged as a local big tech firm, boasting over 54 million users and 133 affiliates and subsidiaries.

Kakao, which runs Korea’s biggest mobile chat app KakaoTalk, was established in 2006, and pulled off a merger with Daum Communications, a portal competing with Naver, in 2014. After rebranding, Kakao now handles over 46 million active users per month for its mobile chat app, while operating 158 affiliates and subsidiaries in a wide range of fields.

Naver and Kakao are the country’s most dominant online platform providers. From online retail to ride-hailing to fintech, the virtual duopoly is rapidly expanding into other growth sectors and strengthening its control on the domestic digital market in general. 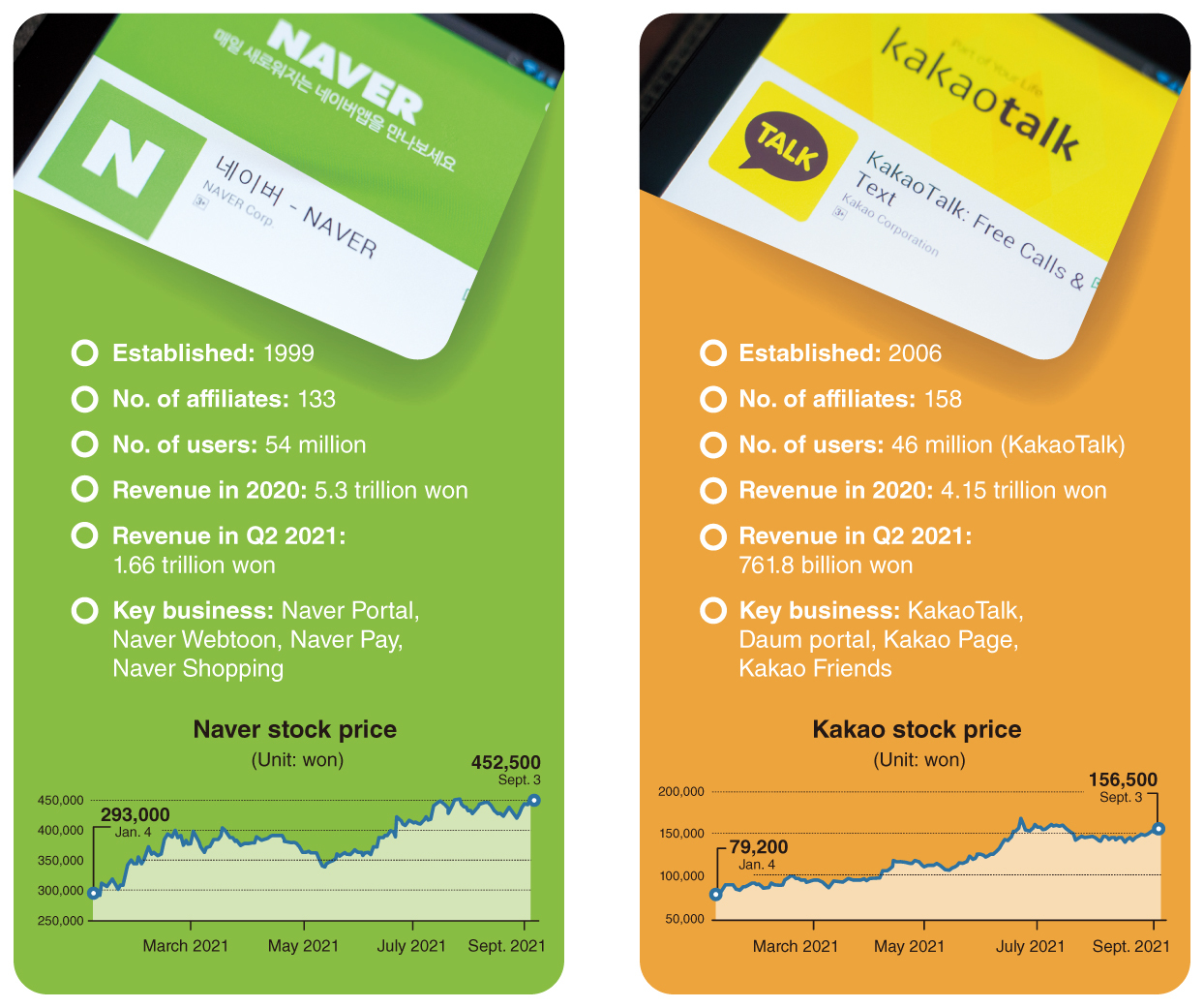 Although there are other smaller platform players in online shopping and other select fields, they are no match for Naver and Kakao in terms of user base and technological edge. Just like Google and Apple, critics argue that it is time to set up measures to prevent the two tech giants from abusing their market power as dominant platform providers and engaging in unfair business practices.

“Online platform operators, which have trade information for both sellers and buyers, could use their exclusive monopoly of the data to control consumers and small merchants in order to maximize their profits,” said Kim Yoon-jeong, a legal expert and an adviser to the Fair Trade Commission. “To prevent abuse of power and unfair business acts by platform operators, it is necessary to pass an online platform law.”

The FTC and other Korean state agencies are coming up with proposals to revise related laws to beef up regulations, targeting Naver, Kakao and other dominant online players.

The moves come after a slew of complaints against Naver and Kakao were filed in various fields where the two companies have unparalleled dominance over smaller rivals.

Naver and Kakao have nurtured the domestic webtoon market, but the sector is not without problems. Agencies reportedly tend to sign unfair contracts with webtoon artists. As a result, artists often lose the rights to their own artworks as agencies obtain overly comprehensive rights for the use of content in other media.

In 2018, the FTC cracked down on such unfair contracts and nullified such content deals. Since then, agencies are resorting to other subtle forms called “collective copyright” in a way that take away intellectual rights from webtoon artists.

According to a report of the Korea Creative Content Agency published in 2020, 50.4 percent of webtoon artists experienced unfair contracts. Among unfair practices, cases in which agencies force a unilateral contract ranked the first with 18 percent.

Given that Naver and Kakao not only run large-scale webtoon platforms but also invest in webtoon agencies themselves, critics said the two companies should make efforts to prevent such unfair contracts.

In an interview with local media, however, Naver claimed that its partner agencies do not engage in unfair contracts with webtoon artists and intellectual properties involving the artworks on the Naver Webtoon platform are owned by artists.

Kakao Page, a webtoon and web novel platform of Kakao, said that agencies and companies that it has invested in do not sign unfair business contracts with artists.

“Our contracts do not use the term ‘collective copyright’ and webtoon artists retain all copyrights. We have not detected any unfair contract cases,” an official from Kakao Page was quoted as saying in a media report.

Platform-based business in Korea is booming, but it is also dominated by the duopoly of Naver and Kakao. In an industry report published in April, the Ministry of Science and ICT said platform-based transactions reached 126 trillion won ($108.9 billion) last year, up 30 percent from 2019. The number of platform operators also jumped by 123 to 678 during the same period, but only a handful of key players carve out the biggest share in the budding platform-centered sector.

Kakao Mobility, a unit of Kakao, controls some 80 percent share in the taxi-hailing market. According to MobileIndex, there are 250,000 taxi drivers across the country, and some 230,000 drivers have signed up for Kakao T, a ride-hailing mobile app of Kakao Mobility. The number of Kakao T users has also skyrocketed to 28 million.

Taking advantage of a dominant position, Kakao Mobility announced it would modify the fee system in a way that would boost its revenue. In some cases, consumers would have to pay a higher fee than the actual taxi fare under the changed mobile app payment system. The move sparked a wave of disputes, prompting Kakao Page to quickly lower the cap for extra fees, but it still came under fire for the rate hike.

The Korean government, in fact, has no say about a future service fee hike by Kakao Page since it is not a taxi service operator but a platform provider. A raise in taxi fares is usually coordinated by provincial governments, but platform operators have no obligation to follow state guidelines, illustrating the lack of proper regulations for emerging industries in Korea.

Kakao’s core business model is based on its mobile app KakaoTalk. After a hectic expansion period, Kakao now has a sprawling business portfolio ranging from fintech to mobile payments. A worrying sign for critics is that Kakao is likely to expand further, making entry into other sectors by utilizing its platform power.

Experts said that Naver and Kakao are rushing to build up comprehensive market control through mergers and acquisitions, and there should be regulatory measures that can prevent such platform operators from abusing their position.