Netmarble on Wednesday launched action role-playing mobile game Marvel Future Revolution in some 240 countries, including Korea, and early signs were positive as the game shot to No. 1 on the RPG charts on Apple’s App Store in 78 countries, based on prerelease downloads that were made available Tuesday.

The first open-world Marvel mobile game, based on an original storyline set in the multiverse, allows users to play eight fan-favorite characters, including Black Widow, Spider-Man, Iron Man and Captain America, to defend against villains.

The game, armed with top-notch graphics and the brand power of the Marvel franchise, is said to offer a chance to test the full computing power of the latest mobile devices like the M1 iPad.

As for in-app purchases embedded throughout the game, which is a familiar concept for Korean players, foreign game media said the game does not force a pay-to-win route, allowing players to disable or ignore paywall functions.

Although the game is drawing attention from both players and game media around the world thanks to the global launch, it remains to be seen whether Marvel Future Revolution can top expectations in terms of revenue and user base, as mainstream gamers are just beginning to play the game and explore its features.


NCSoft, which relies heavily on its long-running Lineage franchise, is set to launch Blade & Soul 2 on Thursday, marking a new addition to its pay-to-win game portfolio. The game is a sequel to Blade & Soul, a Korean fantasy martial-arts RPG that was released in 2012.

Blade & Soul 2 will be available on both PC and mobile platforms, as NCSoft offers a cross-play service called Purple.

The game ranked No. 1 on Google’s Play Store on Wednesday, thanks to massive prerelease downloads, illustrating heightened attention from local gamers.

Expectations are running high, as the mobile game already has drawn a record 7.46 preregistrations, a level that surpassed the past milestone set by NCSoft’s own mobile title Lineage 2M.

For NCSoft, the success of Blade & Soul 2 is crucial, as it is witnessing an overall decline in the popularity of its flagship Lineage games, with many users expressing deep fatigue for their extreme pay-to-win schemes.

Thanks to mounting frustrations felt by Lineage users, NCSoft’s mega hit Lineage M lost its No. 1 position to a multiplayer mobile game called Odin: Valhalla Rising from Kakao Games in July. This came as a shock for NCSoft, which had dominated the game rankings for four years with Lineage M.

Odin’s success is largely attributed to a combination of strong marketing, high-quality gameplay and fast-paced updates. Another key element is that Odin does not put strong pressure on users to buy virtual items to stay competitive -- at least not to the extent that Lineage games do. Instead, Odin is known to maintain a balanced mix of free and paid items based on fixed and random ratios, an enticing point for players tired of almost mandatory regular in-app purchases that are deemed too burdensome.

Well aware of the negative user sentiment, the company recently hinted that the profit scheme of Blade & Soul 2 would not mimic that of Lineage games. At a recent press conference, an NCSoft official said there is no in-game buff system, such as that known as “Einhasad’s Grace” in Blade & Soul 2. Lineage players often feel pressured to buy Einhasad’s Grace buffs to earn more experience and speed up the collection of coins.

Some YouTube streamers, however, pointed out that NCSoft’s denial may be an empty promise, as the new game has nearly the same paid buff system with a different name -- “Young-gi.”

Aside from the dispute over paid items, local brokerages hold a positive view of NCSoft‘s new title as it is widely expected to attract a significant number of mobile players who are ready to open their wallets to boost the power of their virtual characters. 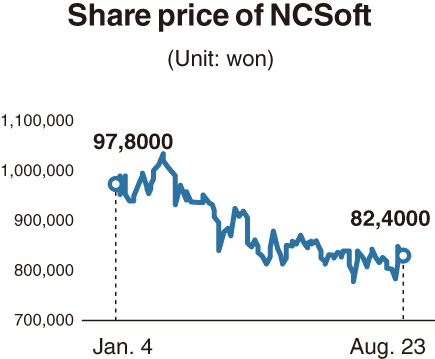 Shares of NCSoft hit a peak of 1,038,000 won ($890) in early February before trending downhill in the following months. The share price fell as low as 771,000 won on Aug. 7, before staging a rebound to over 800,000 won in recent trade, but there are lingering concerns about NCSoft’s weaker market position and shrinking profits.

NCSoft’s operating profit was 112.8 billion won in the second quarter, a 47 percent decrease from a year earlier, and its net profit fell 40 percent on-year to 94.3 billion won.