The continued sell-offs of Samsung and SK hynix by foreign investors weakened their share prices. Samsung’s share price ended at 72,500 won Friday, down 12.9 percent from a recent high of 83,300 won recorded on Aug. 5. During the same period, SK hynix shares dropped 14.5 percent to 102,500 won.

Local brokerages forecast that Samsung’s operating profit for 2021 would be around 50 trillion won, but estimates for 2022 vary widely between 51 trillion won and 81 trillion won.

The deep uncertainty running through the 2022 projections for Samsung is a reflection of a gloomy outlook for the memory chip market. Morgan Stanley recently downgraded Micron Technology to equal weight from overweight, citing a change in the cycle of the DRAM market that could lower chip prices.

Korean brokerages are currently lowering the earnings in the coming quarters for Samsung and SK hynix, cautioning investors to take a wait-and-see stance at least until the fourth quarter of this year.

Major buyers of DRAM chips have stockpiled a high level of inventory to prepare for a chip shortage, a factor that is expected to ease demand in the fourth quarter. A disruption in the production of electronic devices sparked by a shortage of non-memory chips is also feared to undercut the prices of DRAM chips further.

For Korean investors of Samsung and SK hynix, however, there is some positive news. For starters, Samsung retook the top spot in chip sales in the April-June period of this year, outpacing US-based chip giant Intel for the first time since the third quarter of 2018, according to a report Friday. 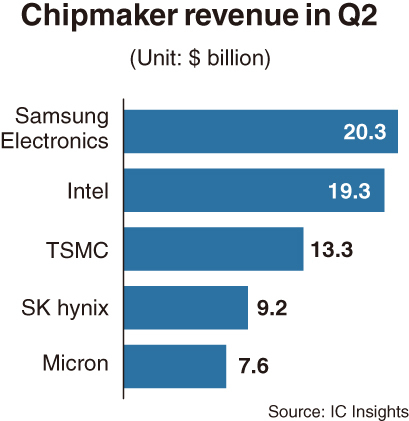 Samsung posted $20.29 billion in chip revenue in the second quarter, up 19 percent from the previous quarter, according to market researcher IC Insights.

Trailing behind Samsung was Intel, which recorded $19.3 billion in chip sales during the same period. Taiwan Semiconductor Manufacturing Co., the world’s No. 1 foundry company, ranked third with $13.31 billion in sales.

IC Insights forecast that Samsung would retain its top position in the third quarter as well, saying that demand for memory chips would likely remain robust for a while.

Another piece of positive news is the projection for the overall growth of the semiconductor market. According to industry tracker World Semiconductor Trade Statistics, the global semiconductor market is forecast to grow 25.1 percent this year to reach $551 billion, despite concerns of a slowdown in demand. WSTS previously estimated that the total revenue of 2021 would be $527.2 billion.

WSTS said Korean chipmakers would drive up the growth trend, saying that the memory chip sector would expand by 37.1 percent.

Drawing up a positive picture for 2022, WSTS forecasts that the global semiconductor market will grow by 10.1 percent to $606 billion, driven by the continued demand for memory chips, marking a departure from other reports projecting a slowdown in the DRAM chip market.

For the share price of Samsung, local analysts pointed out that the tech giant has to make extra efforts to ensure that its non-memory business would post 20 trillion-24 trillion won in annual revenue and double-digit growth in operating profit. The focus on non-memory chips is in order as Samsung’s memory business tends to go through steep cyclical changes between 49 percent and 65 percent year-on-year. The average change of non-memory sales, in contrast, ranges between 26 percent and 31 percent. The share of non-memory chips in Samsung’s semiconductor business is estimated at about 25 percent. Analysts and investors alike hope Samsung will consider mergers and acquisitions to overhaul the portfolio of its chip business to shore up its share price.

The global non-memory market is going through a feverish period. Intel is investing heavily in new foundry plants to manufacture third-party chips and TSMC is eyeing new plants in Germany and Japan.

Amid worries about a looming change in the chip cycle, Samsung said in its earnings report in the first half that it expects solid demand for DRAM chips used in servers later this year.