[ESG Talk] Enabling blockchain to be the foundational technology for ESG

By Korea Herald
Published : Jul 26, 2021 - 15:51       Updated : Jul 27, 2021 - 13:41
Blockchain has been around for some time now, yet it still remains mysterious to many. Most people assume it is a disruptive technology to the current monetary system. However, in a vastly digitalized world where data is a valuable, fungible resource that brings endless innovations, blockchain tops the list as the game-changing technology. It can revolutionize nearly all industries such as finance, pharmaceuticals, and entertainment. Furthermore, blockchain can transform all company’s value chain activities from manufacturing, logistics to sales.

Among many benefits for adopting environmental, social and governance factors, the two main areas of promise are the blockchain’s transformative role in catalyzing corporate Korea toward protocol economy and circular economy. Blockchain can complement platform system by allowing users to equally share the benefits through its encrypted protocol system. Lastly, blockchain is likely to catalyze the circular economy substantially which is based on the three R principles (reduce-reuse-recycle).

Blockchain is the 1990s’ internet – It impacts every business activity

For some, blockchain may be an intimidating technology. The price fluctuations in the cryptocurrency market had evoked great social panic due to its scale of volatility. The price bubble hit the large crowd of fast movers severely. The financial experts and policymakers could barely explain the phenomenon, and equivocal economic outlooks only complicated the confusion. Due to these past events, blockchain often resonates with cryptocurrency to many people, which signals a red alert as a dangerous scam.

It’s unfortunate that blockchain earned this reputation because it has far greater functionality than delivering monetary value to our world. In fact, blockchain should be considered a foundational technology. It is a digital ledger or recording technology. As every business keeps a record of inventories and transactions, blockchain technology can be used and adopted in nearly all human and business activities such as supply chains, digital contents, patents, smart contracts, governance, and e-voting.

An easy way to understand blockchain is to remember the three keywords: recording, blocks, and chain. Simply put, it is a technology that “records” all transactions that occurred at a point in time into a “block.” Each block is then encrypted, hashed, and linked into a “chain.” Thus, blockchain is a chained (recorded) data block encrypted by sophisticated computer programs, the artificial intelligence. This AI factor is what makes blockchain anonymous, decentralized, secure, immutable, and less bias-free.

Those who believe in blockchain technology’s potentials affirm that we should treat blockchain like the internet of the 1990s. The scale and gravity of the impact the internet had brought were revolutionary. It was a foundational technology that transformed the entire social and business activities. Likewise, the influence of blockchain on people’s daily lives and companies will be immense as well. And just as we comfortably use the internet without knowing how the internet technically works, we could be using the technology sooner than we expect.

Blockchain as the enabler of protocol economy

Regardless of the company size, everyone can equally participate and monitor the process. There is enhanced coordination and control mechanisms among stakeholders while goods and services are mobilized faster and more cost-efficiently. Famous examples include how Walmart and IBM joined in pilot projects by utilizing blockchain to speed up the farm-to-table process for their pork in China and mangoes in the US. Reports show that mango tracking time reduced from 7 days to 2.2 seconds with the blockchain platform.

Another interesting case where blockchain benefits stakeholders is detecting counterfeit products. For example, a London-based digital transparency company called Everledger keeps track of diamond supply chains among other luxury goods and gemstones and confirms the source and location of each item to detect counterfeits. 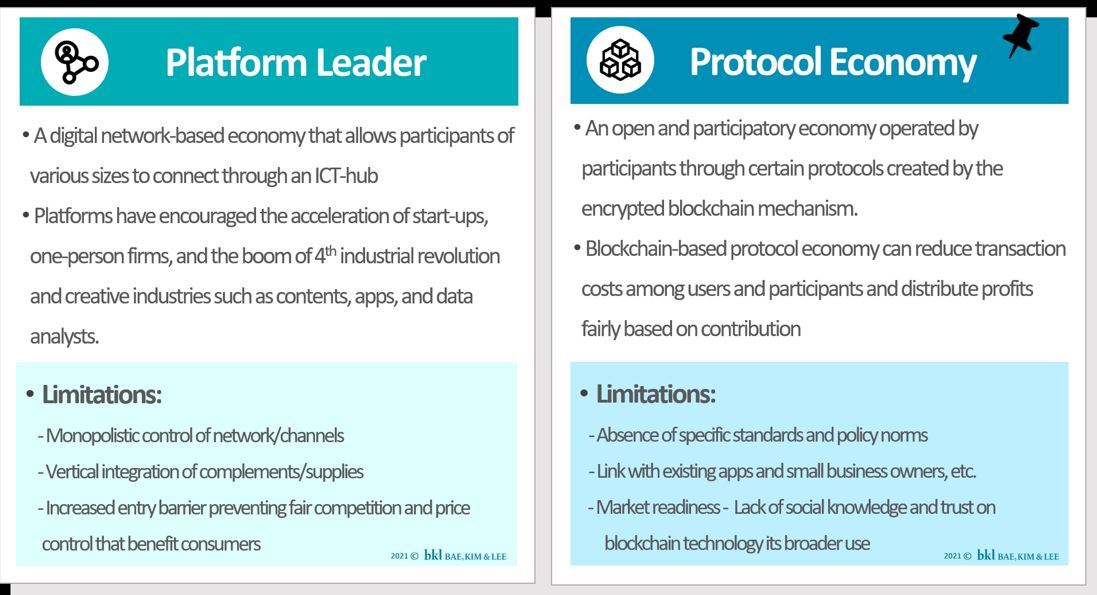 Similar blockchain platforms in the pharmaceutical distribution segments detect counterfeit pills which cause serious health risks for consumers annually across the world by 10-30 percent. By using blockchain technologies, companies track the pharmaceutical supply chain to prevent such hazards. This type of supply chain management in the health care sector also allows institutional monitoring of medication supply, which is critical in the times like COVID-19.

Although blockchain does not require trust since transaction records are traceable and transparent, it still reinforces mutuality, interdependence, and trust among stakeholders. There is a certain “protocol” which lies at the heart of blockchain technology, enabling information to be shared automatically across the crypto-network securely and reliably. Therefore, the protocol-based blockchain technology functions more fairly than the non-blockchain platforms operated by humans, which can easily become biased and monopolistic.

This is why the South Korean government, with the leadership of the Ministry of SMEs and Startups, is actively promoting the Protocol Economy with national ESG goals. In an era where information or data is a valuable resource, platform owners can store and use consumer data to show individualized recommendations and customize advertisements. Utilizing consumer data will equip the company with user-friendly services and help the platform grow exponentially, however this comes at the cost of creating huge entry barrier for others. Blockchain resolves this issue by disallowing exclusive data ownership by the platform owners.

Early in 2021, the South Korean government announced the final approval of the “MyData (personal data transaction)” that uses blockchain technology at its core. Sejong Telecom is planning to expand its business by integrating its BlueBrick blockchain platform with other industry segments such as finance, media, logistics, public sector, health care, and utilities as part of the company’s new blockchain platform. For example, BlueBrick’s health care platform will allow users to store their medical data more securely, save costs on receiving medical examinations in different hospitals by granting access to the patient’s self-medical records, and earn money from selling data. Thus, everyone in the blockchain platform, not only the owner, will benefit from exchanging data.

Blockchain as the enabler of circular economy

An essential theme in ESG is the circular economy, and many companies have embodied this concept into their ESG practices and reports this year. Blockchain technology allows us to trace the lifecycle of goods and services. In addition, as mandates and policies around climate change are enforced with the Paris Agreement fledgling and green initiatives increasing in 2021, businesses are at stake to reduce their carbon footprint.

Blockchain’s key features of recording, tracing, and exchanging can be applied directly to track, monitor, and manage waste (reuse-repair-recycle) to reduce carbon emissions and even for carbon trading. For example, companies can allow consumers to access records on which goods or services are purchased from where, along with environment-specific information such as carbon emissions and biodiversity. 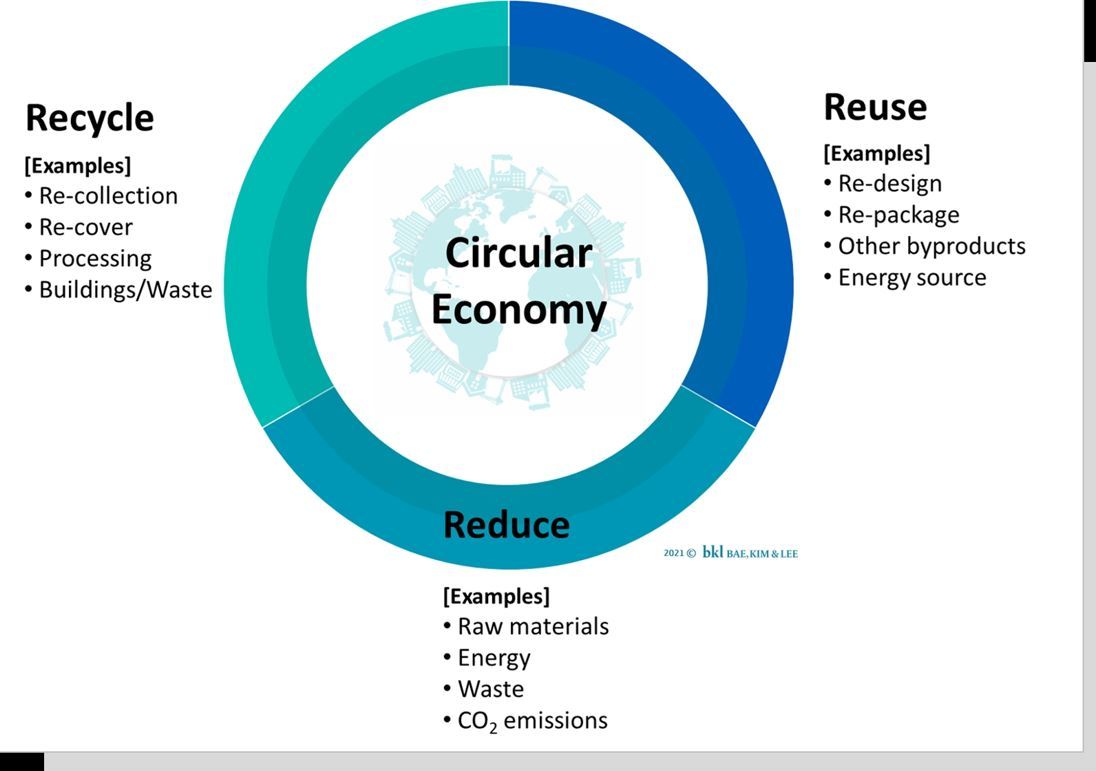 As a nascent technology, blockchain has yet many areas to explore and expand. Blockchain can address environmental challenges such as climate change, biodiversity, and energy scarcity while self-managing its own carbon emission challenge in the future. There will be tremendous potential to ignite ESG in digitally advanced Korea. As an enabling technology, blockchain will change the landscape of our world toward ESG’s critical agenda, such as the circular economy, within a matter of time.