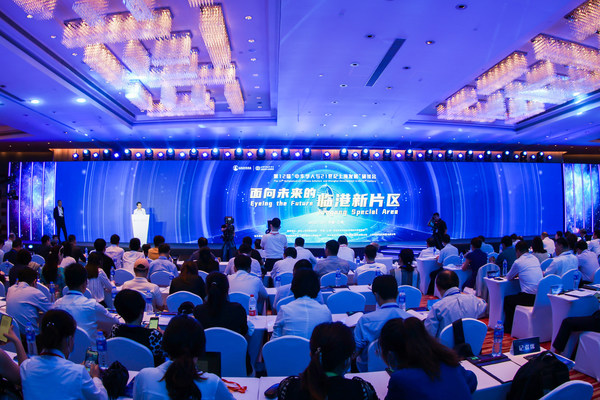 Photo shows the 12th Symposium on Chinese Scholars and Shanghai Development in the 21st Century held in Shanghai on July 15, 2021.

Since its establishment, the special area has focused on building up an investment and trade liberalization-centered rules system to boost opening-up.

In the future, where will the Lin-gang Special Area be heading for? Experts who attended the 12th Symposium on Chinese Scholars and Shanghai Development in the 21st Century held in Shanghai on Thursday generally believed that the special area shall continue to broaden opening-up and intensify stress testing to construct a more influential and competitive special economic zone. Jointly organized by Shanghai Chinese Overseas Friendship Association and Shanghai Overseas Returned Scholars Association, the symposium is dedicated to depicting the future of Lin-gang Special Area.

In the 14th Five-Year Plan period (2021-2025), Lin-gang Special Area will take full advantage of its role as a testing field for reform and opening-up to better participate in global cooperation and competition, said Zhu Zhisong, member of the Standing Committee of CPC Shanghai Municipal Committee and deputy managing director of Lin-gang Special Area Administration.

To better support the area, more talents and resources will be pooled from home and abroad, vowed Zheng Gangmiao, member of the Standing Committee and head of United Front Work Department of CPC Shanghai Municipal Committee.

Alongside application of the first batch of innovative business modes and debut of innovative programs and businesses, the special area is linking up the domestic and foreign factor market with improved efficiency.

It also valued developing hardcore technology-driven industries. Currently, an integrated circuit industry chain covering chip design, equipment and materials, manufacturing, the third generation of semiconductor, and packaging and testing has basically been in shape in the area.