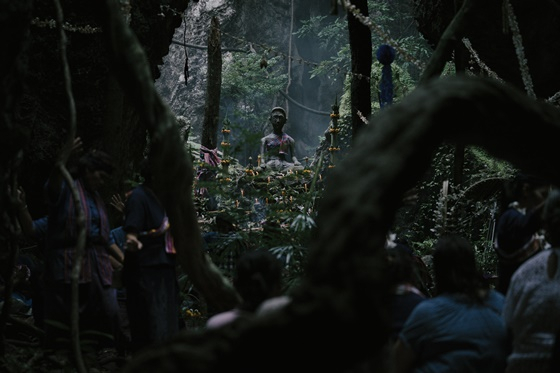 "The Medium,” produced by Korean director Na Hong-jin and directed by Thai filmmaker Banjong Pisanthanakun, is set for release in Korea in July. (Show Box)
Na Hong-jin, who has directed multiple South Korean thrillers and met with both commercial and critical success, is coming out with a new Thai movie in July, according to local distributor Show Box on Thursday.

In September last year, the Korean film distributor announced that Na had teamed up with popular Thai filmmaker Banjong Pisanthanakun to make “The Medium,” a horror film set in rural Thailand.

“The Medium” shows three months in the life of a family that has inherited special spiritual powers.

While Na wrote the script and produced the film -- his first time in the producer role -- Pisanthanakun was in charge of directing.

Na’s previous films include “The Chaser” (2008) and “The Yellow Sea” (2010). His most recent work, “The Wailing,” drew 6.87 million moviegoers in Korea when it was released in 2016 and was named the best film that year by an association of Korean film critics.

Pisanthanakun achieved stardom in 2013 with rom-com thriller “Pee Mak,” the first movie in Thailand to attract more than 10 million viewers. He has also directed several other hit horror films, such as “Shutter” (2004) and “Alone” (2007).

The new Thai-Korean film is highly anticipated by global audiences. French distributor The Jokers Films, which also distributed acclaimed Korean films such as “Parasite” (2019) and “The Handmaiden” (2016), has already decided to distribute Na’s film in France.

“The Medium” will be released globally after hitting local theaters in July.