Throughout its 60-year history, South Korea’s NH NongHyup Bank managed to build an unparalleled reputation as the nation’s most successful agricultural and commercial bank.

Hinting its popularity among Koreans in retail banking, its net profit in the first three months of this year gained roughly 30 percent on-year to 409.7 billion won ($366.5 million) amid ongoing risks from the COVID-19 pandemic. Buoyed by its flagship banking unit’s successful growth, its holding group NH Financial Group’s total assets stood at a robust 494.1 trillion won at the end of the first quarter.

Despite its success in the local market, however, it has been deemed “behind” its market peers in its global outreach. But that is about to change, says the lender’s new CEO Kwon Joon-hak, who took the helm in December.

“We are pursuing a strategic global expansion where both existing and upcoming overseas networks are classified by their key businesses: Corporate banking, financial hub for developed economies and global headquarters for retail banking,” Kwon said in an interview with The Korea Herald.

“The branches which are to be established in Beijing, Ho Chi Minh and India’s planned city of Noida will be focused on corporate banking, while the branches in Sydney, Hong Kong and an office in London will work as channels into developed economies,” he added, pointing to the establishment of five global branches and one office that are underway.

NongHyup has been pursuing an overseas expansion at an unprecedented speed under Kwon’s wings, to meet its goal of launching 14 businesses in 12 nations by 2025. Previously, after launching its first overseas branch in New York in 2013, it entered one or two new global markets at an average of every two years.

Just last week, it was granted a license to operate a branch in Hong Kong by the monetary authorities in Asia’s largest financial hub. In April, it received a preliminary approval from Beijing for the establishment of the branch there after clinching permission to use its brand name in Sydney from Australia’s authorities in March. NH NongHyup plans to either launch the businesses or receive some forms of approval from respective financial authorities by the end of the year. 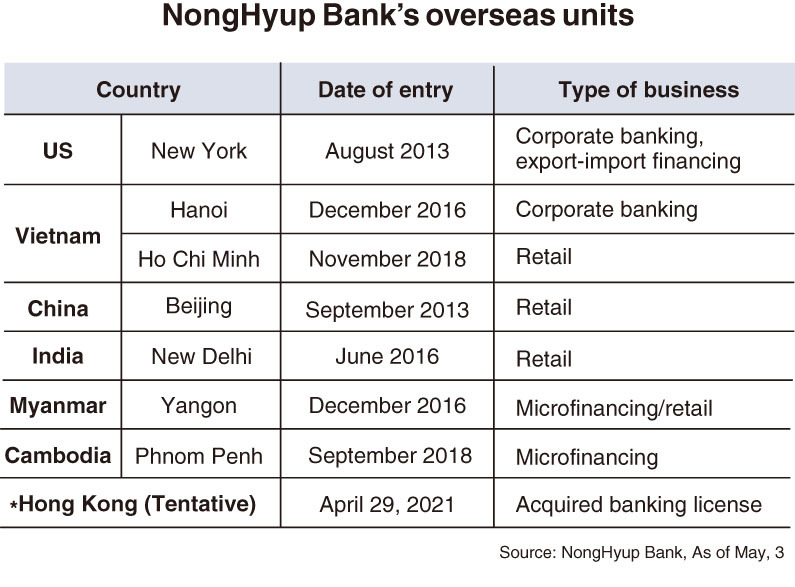 “The overseas businesses for corporate banking, including the Beijing branch, will focus on extending loans to Korean businesses in the markets alongside financial aid towards trade and projects carried out jointly with NH NongHyup affiliates, in their early stages,” Kwon said.

“Agricultural finance is affected largely by government policies and there are expected to be hurdles in entering the specific market just by ourselves,” he said.

“However, we plan to cooperate with our NACF counterparts in the respective nations that hold amicable relations with the governments (in entering their agricultural finance area) after the businesses are established.”

On its business in Myanmar -- a nation devastated by its monthslong military coup -- Kwon said that it has no plans to pull out at the moment. NH NongHyup has ordered its Korean and Burmese employees at its Yangon microfinancing subsidiary and office to work remotely as a safety precaution.

“We put the safety of our employees first and have been drawing up countermeasures that could help protect our business there in even worst-case scenarios,” he said.

“However, most Korean microfinancing businesses there have yet to completely shut down their operations, especially after the protests became more low-key after the Thingyan New Year holiday there,” Kwon said, referring to the Buddhist festival that ended on April 16.

NH NongHyup has 373 employees under its Myanmar microfinancing subsidiary and office. Of them, three are Korean employees while the rest are Burmese nationals.

While it could be an opportunity to smoothly expand its presence in the global market, Kwon maintained a cautious stance toward the possibility of acquiring Citigroup’s consumer banking operations after its planned exit from 13 markets, including South Korea. Besides Korea, the group plans to withdraw from Australia, Bahrain, China, India, Indonesia, Malaysia, the Philippines, Poland, Russia, Taiwan, Thailand and Vietnam.

“Citigroup’s detailed exit plans have yet to be released at the moment and as the firm could devise different strategies depending on the market, so we plan to review the plans after they are finalized, if necessary,” Kwon explained.

Experts have said that Citigroup’s global downsizing in consumer banking reflects the increasing market share of fintech groups. Traditional banks have been gearing up to establish their grounds in the market, and NH NongHyup is no exception.

“NH NongHyup is aiming to become a customer-centric business with a strong digital platform for 2021,” Kwon said.

“While cooperating with fintech groups in finding the platform that our customers need the most, we will build a digital platform based on the strengths of a traditional lender.”
According to Kwon, NH NongHyup is already fostering 103 startups -- mostly fintech groups -- as part of its startup incubation program to design the best road map towards digitalization through cooperation.

The bank is also preparing to launch the latest version of its mobile payment solution app dubbed “NH Pay” in August. NH Pay will be first available to those with NH NongHyup accounts before gradually expanding to non-subscribers.

A key advantage of NH Pay will be “services that will be provided with its ties to the NACF online shopping mall,” according to Kwon.

“We plan to adopt a one-step payment process for the NACF online mall, which will allow customers to receive high-quality agriculture goods and produce with several advantages,” he said.

To further cater to its customers, the lender is working on upgrading its artificial intelligence-based chatbots as part of its digital efforts, Kwon said.

The adoption of environmental, social and governance values has been a management keyword for local financial groups here since last year and NH NongHyup has hopped on the bandwagon willingly, highlighting its identity as an agricultural bank.

It has been financially aiding local smart farms and introducing several loans that benefit local farmers and agricultural firms.

“We have also declared ‘coal-free finance’ in February to halt new investments of coal-powered plants, in a bid to cooperate in the fight against climate crisis,” Kwon said.

Amid its ESG drive, digitalization and global movements, Kwon expects the business to be steady this year, despite the pandemic.

“The government’s stricter financial regulations and heightened competition among banks have led to an increased importance in non-interest income related activities,” he said.

“NH NongHyup has been working on recovery of customer trust with stronger control of intracompany activities and focusing on enhancing the power of our asset management services alongside new businesses.”

Kwon, 58, was named chief executive of NH NongHyup Bank in December last year. The board lauded his experience in field management and smooth communication skills with his employees at the time.

Kwon is a “NongHyup man” through and through -- he entered the NACF in 1989 after graduating from Kyung Hee University. The incumbent chief then rose to the top after taking on several managerial-level work of key businesses under NH NongHyup Bank.