By Kim Yon-se
Published : May 2, 2021 - 14:41       Updated : May 3, 2021 - 10:31
SEJONG -- South Korea’s seven major cities are leading the nation’s population decline, with the nation’s largest and second-largest cities -- Seoul and Busan -- particularly posting negative growth in the demographic tally for several years.

According to the Ministry of Interior and Safety, the nation’s seven major cities saw the population decrease by 122,083 collectively for the first three months of the year.

This marked the highest decline since the nation faced a downhill trend in the monthly demographic tally in December 2019. 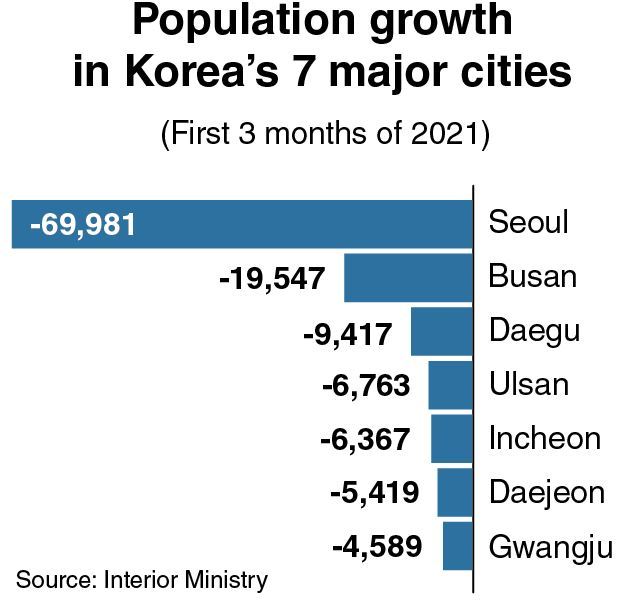 This represents falling marriage rates and record-low fertility rates, though still many young people, born in rural areas, have been moving to metropolitan cities for studying, working and living.

The same trend is also seen in Busan by 2.93 million for those in their 70s vs. 2.28 million for those under 10, and Daegu by 1.76 million vs. 1.75 million. The other four cities are projected to follow suit in the coming years.

By age group nationwide, those in their 50s accounted for the highest portion, 16.6 percent (8.61 million), of the entire population of 51.705 million, which is hinting that the nation is heading toward being a superaged society, from the current aged society.

Ranking next were those in their 40s with a portion of 15.9 percent (8.25 million) of the population.

That was the first time the gender ratio had slid below 100 since the nation began compiling the relevant figures.