[Video] ‘Let’s be someone nature welcomes’ 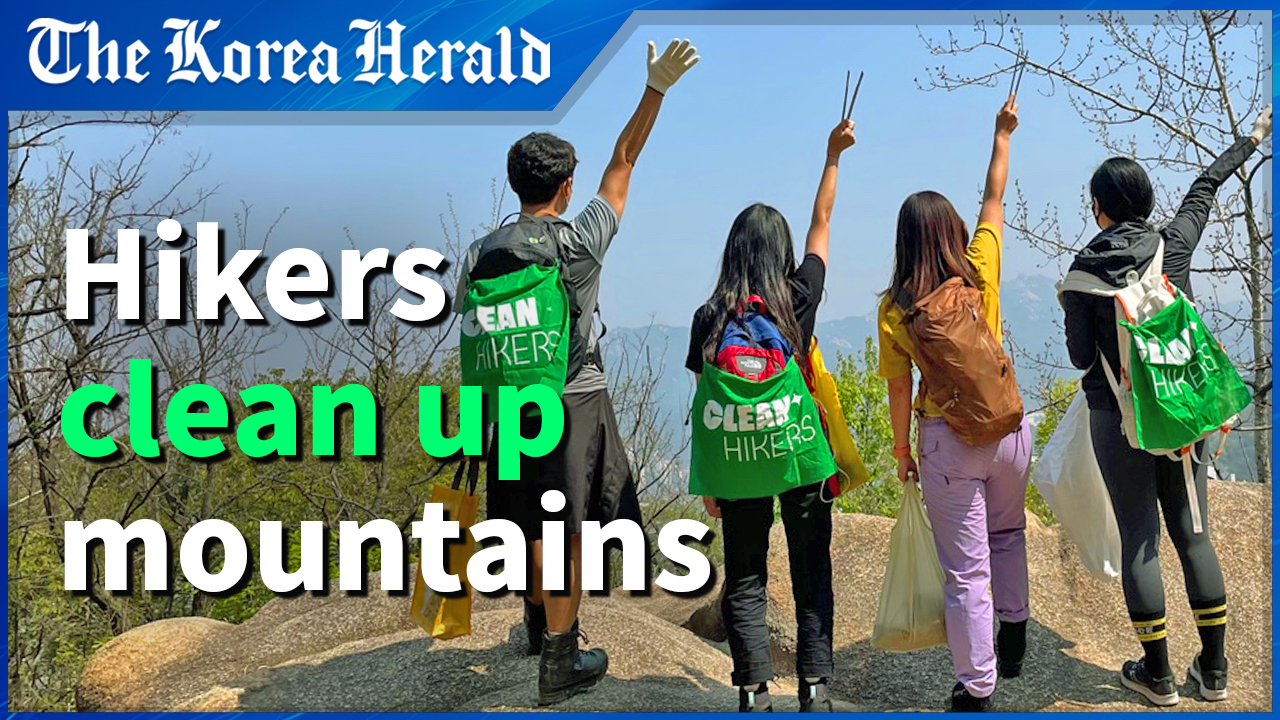 Hiking has become one of the most popular outdoor activities in South Korea. But with the increasing number of hikers, a critical environmental problem arises: litter.

While some ill-mannered hikers do not clean up after themselves, one group is trying to change the careless practice of leaving trash and garbage behind after a hike. These people call themselves Clean Hikers.

Kim Kang-eun, who identifies herself as a hiking artist, is the founder of Clean Hikers.

“As a mountain lover, I went to Jirisan. I was on my way down after watching the sunrise. There was a communal kitchen. I went inside and saw empty liquor bottles and food waste left all over the place. I was shocked,” Kim told The Korea Herald during a Clean Hikers’ session in Ansan, Seoul, Tuesday.

“I wondered how could people, who must have enjoyed going to mountains, do this? That was when I started picking up litter along the trails,” she said.

Kim shared her experience on social media. Many people sympathized with her perspective, so she began recruiting volunteers to join her in picking up litter from mountains and talking about the issue. That was the beginning of Clean Hikers.
The group’s first session took place in March 2018. Seven people gathered to pick up trash along the trails in Cheonggyesan in southern Seoul.

“Thinking that such action, if continued, could spread inspiration and gradually make a change, I have been carrying out Clean Hikers’ sessions until now,” Kim said with a smile.

Over the past three years, 17 official clean hiking sessions have taken place on mountains across the country. But according to Clean Hikers, it isn’t necessary to join the group to be part of the cleanup movement.

“Anyone can do it. You do not have to be in our group. Individual hikers can set the number of pieces of litter they would pick up in a day. Maybe 10 or 20. You can also do it with your family or friends. How about cleaning up the trails on our way down today?” she said.

Clean Hikers’ attempts to change the hiking culture appear to have had an impact. The Korea National Park Service’s data show that all the trash removed from Korea’s 22 national parks, including Jirisan and Seoraksan, amounted to 935 tons last year. That was an 18 percent decrease from 2018, when the total amount of trash recorded 1,142 tons.

But oftentimes, Clean Hikers cannot pick up all the trash because there is just too much.

“One day, I felt a bit worn out on my way down after picking up litter. There was a father and his little child. The young girl saw us trudging with trash bags and tongs. The girl said to her father, ‘Dad, let’s bring a bag next time and pick up trash.’ When I heard that, it resonated in my heart. Because I thought even if I could not change the world, but if what we do can have an impact on just one person, this is a very valuable action that should continue,” Kim said.

The hiker tried to figure out how she could deliver her message in a more effective manner. Eventually, she came up with what she calls “junk art” -- images of the trash picked up by Clean Hikers.

“For example, we made human faces, a crying Earth, animals tearing up, took photos of them and shared them on social media. It is exotic. Even if we talk about the same thing, such images can affect viewers better than pictures of us picking up trash,” she said.

Kim believes junk art can help people understand how much trash is being thrown away in the mountains and how serious the situation is right now. On top of it, the members of Clean Hikers have fun creating the images.

“There is a saying I always tell. It is not the end for me to love (nature), but let’s become someone that nature welcomes,” Kim said. “As my saying goes, I hope we can preserve and protect nature so we can relish it for a long time.”