- Five unique districts, connected by a 20km-long public realm called the Wadi of Hospitality, will protect 200,000 years of natural and human history across the 20km-long core historical area of AlUla, a unique cultural landscape located in north-west Arabia, encompassing a wadi (seasonal river valley) and culminating in the Nabataean city of Hegra, a UNESCO World Heritage Site.

- The first masterplan in a series for AlUla is conceived as a Living Museum and includes 15 new cultural assets, a 9km rejuvenated Cultural Oasis, 10 million square meters of green and open spaces, and a 46km low-carbon tramway, while contributing to AlUla's hospitality offer with 5,000 additional hotel keys.

ALULA, Saudi Arabia, April 8, 2021 /PRNewswire/ -- His Royal Highness the Crown Prince Mohammed bin Salman, Chairman of the Royal Commission for AlUla, today launched The Journey Through Time Masterplan for AlUla, Saudi Arabia that will immerse visitors in 200,000 years of natural and human history.

The Journey Through Time design and spatial visionary masterplan sets out a 15-year programme to responsibly and sustainably develop the core historical area of AlUla, a unique cultural landscape located in north-west Arabia.

The plan contributes to the advancement of Saudi Arabia's Vision 2030, opening a new chapter in the development of AlUla as a Living Museum while accelerating the growth of a diversified economy and vibrant community.

The Journey Through Time Masterplan will transform AlUla into a global destination for heritage, nature, art and culture. Key features of the plan are:

The Journey Through Time Masterplan was developed under the leadership of HRH the Crown Prince and the guidance of HH Prince Badr, the Saudi Minister of Culture and the Governor of the Royal Commission for AlUla (RCU).

The Journey Through Time Masterplan was envisioned as a way to capture the deep-rooted essence of what AlUla already is - an oasis of unique culture, heritage, nature and community – while curating a timeless legacy with stories of the past to inform the future and open new chapters in AlUla's unfolding history.

Each district of The Journey Through Time Masterplan is a cultural landmark in its own right and reflective of the singular and ever-evolving history, topography and nature that is unique to that particular location. This spatial system of highly differentiated villages, experiences and cultural assets is designed to be visitor-centric and rewards more immersive discovery, exploration and longer stays.

Symbolising Saudi Arabia's renewed commitment to the preservation and protection of world heritage, knowledge and research, the masterplan is backed by extensive scientific studies on AlUla's human patterns, environmental and geological evolution, developed by a team of international and Saudi experts.

As a direct response to the challenges of sustainably and responsibly developing a fragile desert environment, the replenishment of the 9km core Cultural Oasis - through research and innovative solutions - will be a key element of the masterplan. Contributing to the Saudi Green Initiative, the regeneration of AlUla is underpinned by a strategy to rehabilitate the land and reverse the course of desertification in the area. Enabling a major expansion of AlUla's green and open spaces up to 10 million square meters, it will provide a haven for AlUla's archaeological sites, an opportunity for sustainable agricultural production as well as an enchanting experience for visitors.

Together, two flagship projects of the masterplan – the Kingdoms Institute and the Cultural Oasis – reflect Saudi Arabia's commitment to offer the world a viable model for protecting, preserving and contributing to the world's cultural and natural legacy.

Creating a new, balanced view of concepts such as protection, conservation, restoration, regeneration and development, the AlUla Sustainability Charter sets the ground for an innovative and integrated approach to sustainability. The Charter includes, at the heart of the masterplan, a zero-carbon policy coupled with circular economy principles, and robust resiliency policies around development in heritage and environmentally sensitive areas, as well as flood and improved water management and vegetation planting.

First and foremost an investment in AlUla's citizens and their future, the masterplan embodies RCU's commitment to community inclusivity. Fully embedded within the plan, new community-driven services, amenities as well as cultural and educational facilities will together create a stronger tourism, cultural and agricultural economy for AlUla. The economic growth will not only grow AlUla's pool of talents within a local community that has acted as guardians of ancestral values, techniques, and traditions over millennia, it will also nurture a thriving and vibrant society in a great place to live, work and explore.

The Journey Through Time Masterplan is the first in a series of plans for AlUla and constitutes the first and most important part of AlUla's development. It will be implemented in three phases until 2035, while the first phase is set to be completed by 2023, aiming to provide a comprehensive visitor-centric experience.

Upon completion of the wider development strategy for AlUla in 2035, 38,000 new jobs amid a population grown to 130,000 will have been created while AlUla will contribute SAR 120 billion to the Kingdom's GDP (USD 32 billion). Additionally, 80 percent of AlUla County will have been designated as nature reserves with key flora and fauna reintroduced.

It will achieve this through income generated by welcoming two million visitors annually, offering 9,400 hotel keys in total, and further promoting agriculture, arts and culture and tourism as key economic drivers for AlUla. Unique opportunities will further encourage and accelerate business and investment from partners who share RCU's values of sustainability, responsible development and community inclusivity.

The most well-known and recognised site in AlUla is Hegra, Saudi Arabia's first UNESCO World Heritage Site. A 52-hectare ancient city, Hegra was the principal southern city of the Nabataean Kingdom and is comprised of nearly 100 well-preserved tombs with elaborate facades cut into sandstone outcrops. Current research suggests Hegra was the most southern outpost of the Romans after conquering the Nabataeans in 106 CE.

In addition to Hegra, AlUla is home to a series of fascinating historical and archaeological sites such as: an Old Town surrounded by an ancient oasis, Dadan, the capital of the Dadan and Lihyan Kingdoms, which is considered one of the most developed 1st-millennium BCE cities of the Arabian Peninsula; thousands of ancient rock art sites and inscriptions in Jabal Ikmah; and Hijaz Railway stations.

Kingdoms Institute is plural, not possessive.

It is always AlUla / not Al-Ula.

About the Royal Commission for AlUla

The Royal Commission for AlUla (RCU) was established by royal decree in July 2017 to preserve and develop AlUla, a region of outstanding natural and cultural significance in North-West Saudi Arabia. RCU's long-term plan outlines a responsible, sustainable, and sensitive approach to urban and economic development, that preserves the area's natural and historic heritage, while establishing AlUla as a desirable location to live, work, and visit. This encompasses a broad range of initiatives across archaeology, tourism, culture, education and the arts, reflecting a commitment to meeting the economic diversification, local community empowerment, and heritage preservation priorities of the Kingdom of Saudi Arabia's Vision 2030 programme.

RCU worked closely with its partner, The French Agency for AlUla Development (AFALULA), on the development of the masterplan. AFALULA was founded in Paris in July 2018 following an intergovernmental agreement signed by France and Saudi Arabia in April of that year. AFALULA aims to support its Saudi partner, The Royal Commission for AlUla (RCU), in the co-construction of the economic, touristic and cultural development of AlUla, a region located in the North-West of Saudi Arabia which benefits from outstanding natural and cultural heritage. The agency's mission is to mobilise French knowledge and expertise and to gather the finest operators and companies in the fields of archaeology, museography, architecture, environment, tourism, hospitality, infrastructure, education, security, agriculture, botany and the sustainable management of natural resources.

Over the past three years, RCU conducted other development work with multiple partners around the world. This included expanding capacity by 300 percent at AlUla's international airport which has welcomed its first international flight recently, and building Maraya, the award-winning multi-purpose conference and entertainment venue. The 500-seat Maraya, the world's largest mirrored building, has hosted global signature events, such as the Hegra Conference of Nobel Laureates and the Winter at Tantora cultural festivals, which featured artists including Andrea Bocelli and Lang Lang. Additionally, previously announced signature hospitality projects include the development of luxury resorts in partnership with Accor/Banyan Tree, Habitas, and Jean Nouvel.

For more information, please refer to the RCU Factsheet. 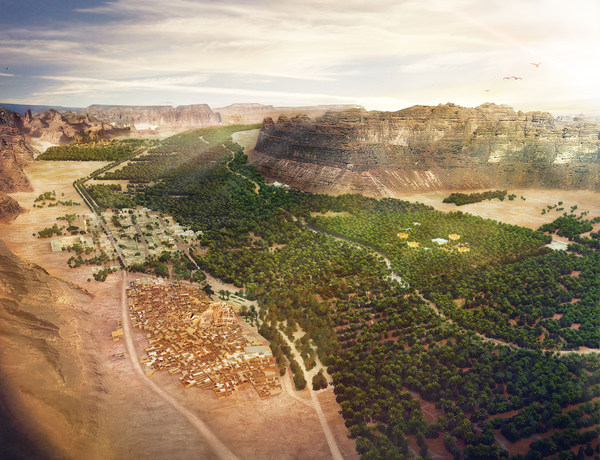 The Cultural Oasis blends heritage, nature and creativity, to the monumental legacies carved in rock at Jabal Ikmah, Dadan and Hegra - sites of ancient wisdom, power and memory.