[Mary McNamara] If killing of six Asian women isn’t hate crime, what is? 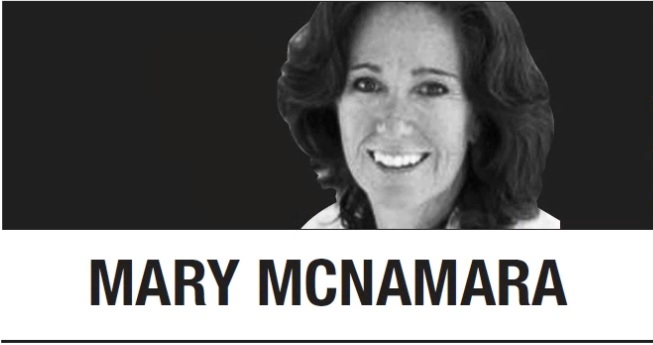 If anyone was still “uneducated” about the insidious and brutal nature of racism in this country, the recent contemptible slaughter of eight people, including six Asian women, in the Atlanta area, along with the early police statements and media coverage of the crime, should clear everything right up.

On Tuesday, eight people were killed and others wounded at three day spas in the Atlanta area. Police apprehended Robert Aaron Long, who officers said later admitted that he was responsible.

Speaking to the press, Cherokee County Sheriff Frank Reynolds, who is white, said that despite the fact that most of the victims were Asian women, the killings did not appear to be hate crimes -- that race “did not appear to be the motive.” Instead, Reynolds said, Long “has some issues, potentially sexual addiction”; he may have “frequented these places in the past and may have been lashing out.”

“Yesterday was a really bad day for him and this is what he did,” Baker said.

The “bad day” comment may go down as the official worst public statement ever made by a law enforcement officer, but honestly, the entire early narrative offered by Cherokee County was horrifying. And not in a “let’s add insult to injury” way.

In a “let’s reveal all the social forces of sexism and racism that make this mass killing possible” way.

Including the media’s continued willingness to accept law enforcement’s narrative in early coverage -- variations of “killings not racially motivated” headlined stories on every media outlet, including this one.

It would be laughable, if it weren’t so catastrophic. And tragic. And infuriating. And proof of exactly what the problem is.

First of all, police dismissed the idea that a shooting spree that killed six Asian women was a racist hate crime for the simple reason that Long told them it was not.

“During his interview, he gave no indicators that this was racially motivated,” Reynolds said. “We asked him specifically and the answer was no.”

Oh, OK. Because killers are notoriously honest and self-aware, let’s go with that.

Long may or may not have been motivated by the recent rise in anti-Asian rhetoric, abuse and violence during the COVID-19 pandemic, which various ignorant bigots have attempted to blame entirely on China and, by xenophobic extension, anyone whose heritage includes any of the 48 countries that make up Asia. But Long was most certainly acting on a broader and more historic variety of racism -- the continual objectification and sexualization of Asian women in Western culture.

From “dragon lady” to “china doll,” Asian women have been fetishized and stereotyped in literature, film, television, comedy and everyday conversation. Whether portrayed as docile and subservient, scheming and insatiable or exotic and inscrutable, Asian women have until very recently been almost categorically depicted as “the other.”

After Reynolds and Baker spoke to the press, thousands of Asian women responded on social and mainstream media to the initial “poor little sex addict” narrative with their stories of abuse, harassment and plain old racism. And, as Caroline Framke pointed out in Variety, Twitter responses to the initial news of the killings were just as revealing: “the overwhelming sameness of the replies was unavoidable, infuriating, and instructive. ‘Not quite the happy ending they were expecting,’ crowed one.”

According to the Asian Pacific Institute on Gender-Based Violence, 24 percent of Asian and Pacific Islander women in America report being stalked during their lifetime, and the LA Times need look only at its own award-winning coverage for further proof of the connection between violence and such fetishization. Four years ago, a Times investigation revealed that Dr. George Tyndall, the then-full-time gynecologist at USC’s student health clinic, had not only abused and sexually harassed hundreds of his patients but had also appeared to target Asian women, including many Chinese students.

Yet this paper’s initial headline about the Atlanta killings -- later changed -- seemed to give credence to the official account: “Suspect in Atlanta-area massage parlor shootings had ‘sexual addiction,’ authorities say.”

Because even after all the soul-searching done during last summer’s Black Lives Matter protests, when first covering any crime, the media -- not just The Times -- tend to follow the narrative offered by law enforcement.

And in this case, law enforcement was following the narrative offered by an admitted killer.

Long may actually believe that he is not a racist. Just like many millions of us believe that America is not racist, despite this being a country where some states are openly attempting to curtail voting rights in ways that disproportionately affect people of color, where for some “mysterious” reason, the Black and Latino population continues to die from COVID-19 at a far higher rate than the rest of the population and where hate crimes against Asian Americans are rising -- Stop AAPI Hate recently reported that the last year saw nearly 3,800 racist attacks on Asian Americans, most of them women.

What Long believes about himself may be interesting to his psychiatrists, but a monster should not be permitted to frame the coverage of his own monstrosities.

Racism pollutes the mind in many ways and often intersects with other bigotries, especially sexism. Eight people died in Georgia on Tuesday, but the target of Long’s attacks was tragically clear: He intended to kill Asian women.

If that is not a racist, sexist hate crime, then what the hell is?