According to Swedish market tracker EV Volumes, global electric vehicle sales in 2020 spiked to 3.24 million units, up 43 percent from 2.26 million on-year, triggering a surge in the price of raw materials for lithium-ion batteries. Nickel and cobalt registered prices at 17-month and 24-month highs, respectively, according to a Hana Financial Investment report.

For electric cars to become commonplace on roads worldwide, they must be affordable. But the rising costs for battery production will likely slow down the pace of electric vehicle prices coming down near to the mass market threshold, Hana Financial Investment analyst Kim Hyun-soo said.

South Korean battery makers, which signed long-term supply deals when prices were lower, appear to be in a relaxed situation, as the latest spikes do not have a direct impact on their production costs.

One local company official even said higher metal prices could be a boon to established players, as they raise the entry barrier for market newcomers.

“For new battery manufacturers, this is the worst period to enter the market,” the official said.

Korean firms, including SK Innovation, have been investing in a stable supply chain for years, recognizing the issue could be a source of business uncertainty. 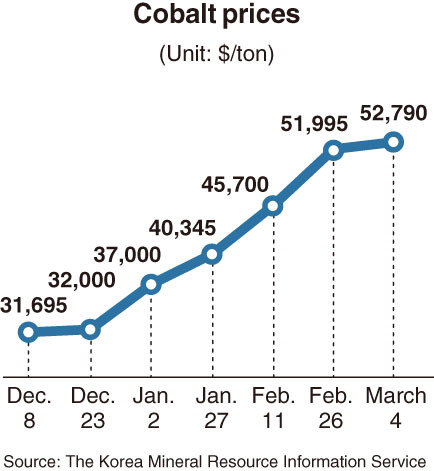 Such long-term deals enable the firm to source essential metals at a fixed price irrespective of fluctuations in market prices.

“Metal prices are different from oil prices, which are controlled by the Organization of the Petroleum Exporting Countries,” an SK Innovation official said. Except for cobalt, most of the metals needed for lithium-ion batteries rarely have a single dominant producer, the official added.

Considering cobalt as a key source of supply chain vulnerability, Korean battery firms are making efforts to reduce or replace the amount of cobalt in their batteries.

LG Energy Solution, which currently manufactures NCM 622, NCM 712 and NCM 811 batteries, plans to roll out NCMA batteries in the second half of this year. NCM refers to the metals used in the batteries -- nickel, cobalt and manganese. The three digits that follow represent the ratio of each of the metals used.

The soon-to-be introduced NCMA batteries contain 90 percent nickel, with the remainder being cobalt, manganese and aluminum. By raising the ratio of nickel to 90 percent and adding aluminum as an alternative to cobalt, LG can not only make their batteries more powerful, but also cheaper. The more nickel inside batteries, the more powerful but less stable they become. The opposite applies to cobalt.

According to the Korea Mineral Resource Information Service, the price of cobalt stood at $52,790 per ton on March 4, while the prices for nickel and aluminum were $16,144 per ton and $2,169 per ton, respectively. The price of manganese on March 5 was $1,435 per ton.

“The rapid upward spiral of metal prices is slowing down and is expected to enter a moderate upward phase. Now, securing a stable supply metals has become a key criteria (when evaluating battery firms),” said Yuanta Securities analyst Kim Kwang-jin.

However, an S&P Global Platts report pointed out that the global battery supply chain remains vulnerable to increases in battery metal prices. According to the report, though the battery industry accounts for only 5 percent of the world’s nickel consumption versus 70 percent from the stainless steel industry, the battery supply chain was affected by uncertainties regarding nickel prices last year.

Along with prudent supply chain management, companies are trying various options and hedges, such as recycling used batteries.

At LG’s battery plant in Kobierzyce, near Wroclaw in Poland, EcoPro will recycle scrap and defective batteries generated during production. EcoPro will extract key resources such as cathode and anode materials, which contain nickel, cobalt, manganese, aluminum and graphite.

The exact size of the deal is unknown, but considering that LG’s battery factory in Poland is equipped with a production capacity of approximately 65 gigawatt-hours, the recycling partnership is expected to create substantial additional value.

The partnership with LG and EcoPro dates back to 2012. At the time, EcoPro had been supplying precursors required to manufacture battery cathodes. However, due to cheaper alternatives from Japanese firms, LG ended its partnership with EcoPro. Despite losing LG, EcoPro continued to grow by supplying cathodes to Japan’s Murata, Samsung SDI and SK Innovation.

Meanwhile, automakers are pilot testing a “battery lease” program to make electric vehicles more accessible to general customers without concerns over battery prices, which account for 40 percent of the total costs of the electric car parts.

According to the program, Hyundai Motor will sell Kona EVs without batteries to KST Mobility, a local taxi operator. Then, Hyundai Glovis, the vehicle delivery arm of Hyundai Motor, will purchase batteries from LG Energy Solution and lease them to KST Mobility. When batteries are swapped after extensive use, Hyundai Glovis will retrieve and sell them to LG Energy Solution, which will install the used batteries in energy storage system units that can offer fast-charging for taxis.

“The program is expected to develop into a new business model that can reduce the price gap between EVs and internal combustion engine vehicles in countries where state subsidies for EVs don’t exist,” a Hyundai Motor official said.