[Kim Myong-sik] Time for a reset to denuclearize North Korea 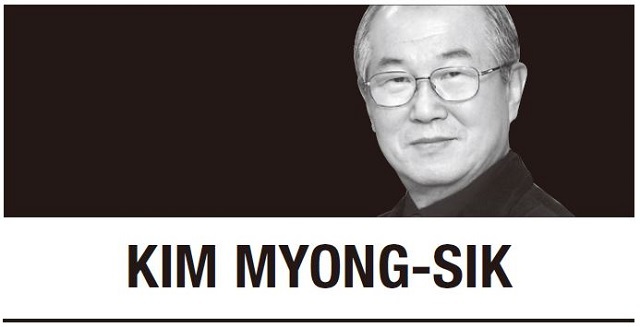 Have South Korea’s armed forces become stronger under the Moon Jae-in administration, or weaker? Those who believe our military power has grown over the past few years cite the 5-7 percent annual increase in the defense budget, much of which was used to purchase high-performance weapons.

Yet others point to the low morale and loose discipline of military personnel, as revealed in frequent news reports. Some analysts attribute this hardly proud state of the 610,000-person armed forces to a loss of self-confidence from having to confront a nuclear-armed enemy across the border.

Pessimists point out a vicious circle: The civilian government has done little to change the asymmetry in the balance of power on the Korean Peninsula, causing civilians to lose trust in their armed forces, which in turn gives the defending force a declining sense of mission, thus the troubles in and outside the barracks.

President Moon Jae-in requested 556 trillion won ($505 billion) for the 2021 budget, of which 52 trillion won is set aside for defense. The defense budget is a huge amount of money -- almost three times bigger than the annual gross domestic product of North Korea. The World Bank put the GDP imbalance between the South and North at 54-1 in 2019.

Despite the impressive figures, South Korean taxpayers feel increasingly insecure when they watch TV footage of North Korean chief Kim Jong-un rejoicing at the launch of long-range missiles and at parades with massive rockets supposedly capable of carrying nuclear warheads.

Each year, a good portion of the defense budget goes to the acquisition of new weapons and to the establishment of early warning, preemptive strike and anti-missile systems to deal with the threats from North Korea. They are appropriately called the “Kill Chain,” Korea Air and Missile Defense and Korea Massive Punishment and Retaliation programs.

A thousand shields are not as good as 10 spears, however. Besides, the overall troop strength of the three armed services is being reduced to 500,000 in the name of slimming down the military. This is being done by reducing the number of conscripts and shortening their compulsory service period to 18 months from 21 for those recruited since last spring.

The skeptics argue that the present leftist government’s soft stance toward North Korea has affected all aspects of the South Korean defense and security structure, resulting in the slackening of overall alertness, particularly in forward outfits. Like their parents, soldiers believe that nothing can force the North to give up its nuclear arms.

New recruits to the Army must have a different awareness of their mission. Older soldiers were trained to fight and win; now, front-line guards must wrestle with the hard question of what they can do with their rifles, guns and tanks to defend their country against the enemy’s nuclear bombs and rockets.

In Seoul, their commander-in-chief, aka the president, is making many efforts to earn the title of peacemaker after three get-togethers with North Korean chief Kim Jong-un. The summit talks produced a military agreement that banned “hostile acts” in areas close to the Demilitarized Zone and reduced guard posts along the border. Kim demolished a disused nuclear test site but kept flying long-range missiles thousands of kilometers into the Pacific.

On the sidelines of the denuclearization negotiations, joined fruitlessly by President Trump, military allies South Korea and the US canceled annual joint exercises that had been held without interruption for decades, to placate Pyongyang. On the other hand, Seoul pushed the years-old plan to take over wartime operational control of the allied forces in the Korean theater from the US side.

When Pyongyang showed its nuclear ambitions in the last decade of the 20th century, the regional powers conducted a multilateral process to stop it by using both carrots and sticks. The six-party talks in Beijing failed, and, after Moon, Kim and Trump’s tripartite summit also came to nothing, South Koreans do not know whom to blame for the North’s effective rise to the status of a nuclear power.

What is ironic is that the leftist rulers of South Korea, while showing ambivalence about the rivalry between the US and China, have driven their people toward stronger trust in the Korea-US Mutual Defense Treaty as the only safeguard against the North’s nuclear threat. By now it has become apparent that the present South Korean power holders would accept the North’s nuclear armament as a fait accompli.

They have pledged against the South going nuclear both in military and civilian pursuits. They say the ultimate solution to the North Korean nuclear problem lies in the unification of the Korean Peninsula, even though they acknowledge that unification is impossible as long as the North keeps its nuclear bombs.

Meanwhile, there is a glimmer of hope on the horizon with the change of power in Washington. A more practical approach can be sought in regard to the North Korean nuclear problem when Joe Biden and his security aides put an end to the short chapter of photo-op summit talks and hollow joint communiques, in which President Moon played a part.

For the next month or so until Joe Biden’s inauguration, Seoul needs to make a thorough review of the two key security issues -- cost-sharing for the stationing of the US troops in South Korea, and the takeover of wartime operational control. It needs to explore a new path to military cooperation with Washington, and to the ultimate task of North Korean denuclearization.

Four years ago I moved to Gimpo, Gyeonggi Province, located in the delta plain created by the Han River where a Marine Corps division is deployed for the defense of Seoul’s northwestern plank. I enjoy trekking through paddy fields and low hills, passing by military camps and training sites as well as numerous foxholes and trenches.

I see barbed wire fences along shorelines and around military facilities rusted by the passage of time. I have rarely spotted soldiers at the infantry training courses on my trips, which makes me worry about defense readiness in this place barely 30 kilometers from the border. I hope that the president and commanders will be able to dispel my concerns in the days ahead.


By Kim Myong-sik
Kim Myong-sik is a former editorial writer for The Korea Herald. -- Ed.