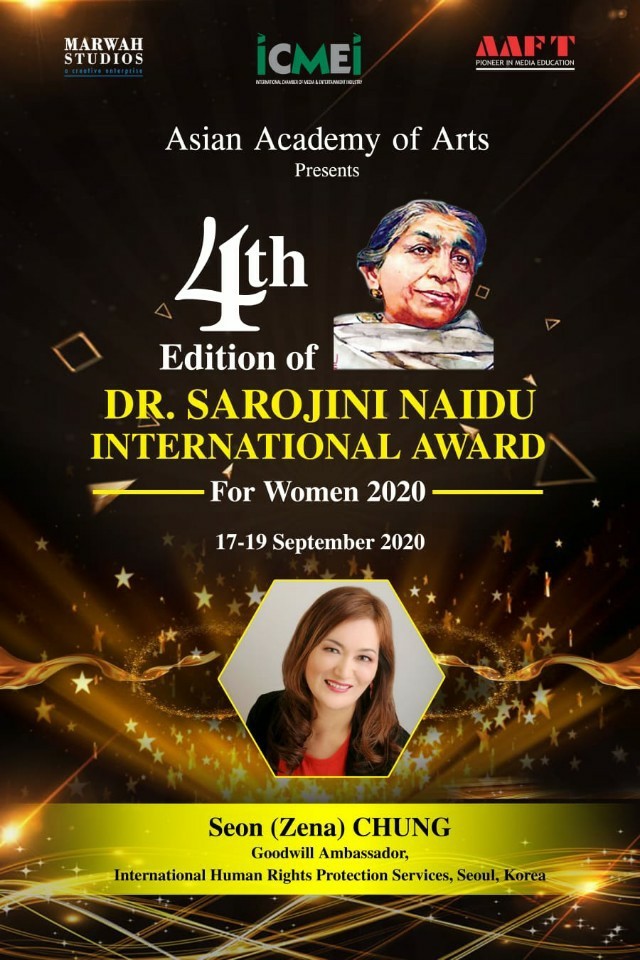 Called the Nightingale of India for her poetry, Naidu is recognized as an important force in India’s independence movement against British colonization, along with Mahatma Gandhi.

"Naidu, an important figure in India, is not a well-known figure to most Koreans. It is an honor to share the leadership of Naidu in Korea,” Chung told The Korea Herald in a phone interview held Sunday. “I hope to bridge Korea and India through this opportunity."

Chung, a Korean Canadian based in Seoul, works as a peace ambassador for the UN Peace Keeping Forces Council, a goodwill ambassador for the International Human Rights Protection Services and a senior adviser to the UN Habitat Korea Committee. She is also the Secretary-General of the Korean-American Businessmen Friendship Forum.

Chung works with the Indian Economic Trade Organization, a state-funded trade promotion organization under the government of India. She was appointed as the board’s director of the South Korea Committee in June.

An advocate of women in leadership, she is the CEO of Eva Global Holdings, which specializes in communication and consulting on international trade, investment, public diplomacy and international business.

She was nominated as the recipient of the award by Dr. Sandeep Marwah, president of the International Chamber of Media and Entertainment Industry. Marwah is a renowned film director and producer in India. He runs the Asian Academy of Arts, which organizes the award.

The award, in its fourth year, celebrates women in leadership. Past recipients of the award had all been Indian women. Due to the COVID-19 pandemic, the award ceremony was held online Friday.