Upcoming Chuseok holidays may be last hope for revival

Two weeks into stricter social distancing measures that ban gatherings of 50 or more people indoors and 100 or more people outdoors, local cinemas have been hit with the double whammy of low attendance and virtually no new film releases.

While the release of most films slated to open this month have been put on hold, film companies said they closely monitoring the virus situation, especially with the Chuseok holiday period -- a peak cinema season – coming up at the end of the month.

CJ ENM, the distributor of the much anticipated family film “Collateral” starring Ha Ji-won and Sung Dong-il, said the release date has yet to be decided.

“With the COVID-19 outbreak continuing, it’s difficult to set a specific release date right now. Our plan is to open ‘Collateral’ within this month before Chuseok holidays,” a CJ ENM public official told The Korea Herald.

The release of another film from the distributor, “Hero,” a period musical that was anticipated to open in the summer, and “Collectors,” fronted by actors Lee Je-hoon and Shin Hye-sun, have both been delayed indefinitely, and will open in the second half of this year if the situation allows, the PR official said. 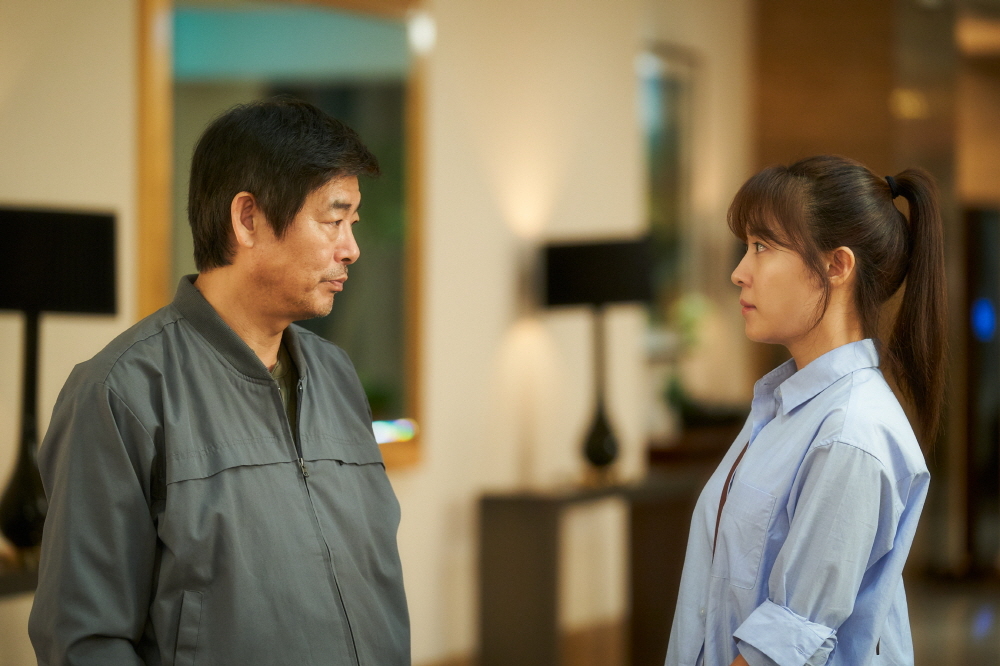 "Collateral" (CJ ENM)
An official from Lotte Entertainment said the company has more than six films from its 2020 line-up have yet to be screened.

“We may have to consider plans for next year,” the official said, explaining that releasing one title a month for the remainder of the year would be too tight a schedule.

“Mogadishu” -- one of this year’s most anticipated films -- may not open this year considering the current virus situation, the official added. The action-crime flick stars actors Kim Yoon-seok and Jo In-sung.

Meanwhile, Lotte Entertainment is still pushing through with the release of its animated film “Beauty Water” slated to open Wednesday. Based on a popular webtoon, the film has been invited to several prestigious international animation awards this year.

Director Hong Sang-soo’s award-winning “The Woman Who Ran” is scheduled to open in theaters Sept. 17. The 24th feature film from the director won the Silver Bear prize for best director at the 70th Berlin International Film Festival.

“Diva,” fronted by actress Shin Min-ah, and “The Swordsman,” starring Jang Hyuk, are slated to open on Sept. 23, followed by Kim Dae-myung’s lead debut “Stone Skipping” on Sept. 30. The opening date for action-comedy “The Golden Holiday” has yet to be confirmed although the plan was for a release this month.

Film productions have also come to a grinding halt. On Aug. 31, film company Showbox said it was suspending all filming for the film “Emergency Declaration.” The plane disaster blockbuster requires a large number of people to gather indoors and the filming has been put on hold until safety can be ensured on site, according to the company.

“This is the longest I have been off work. I’ve had no income since I returned (to Korea) after production for ‘Bogota’ was put on hold,” actor Lee Hee-joon said during a recent press interview following the release of “Oh! My Granny.”

The filming of “Bogota” in Colombia was suspended in March and postponed to next year due to the global pandemic.

Meanwhile, the total number of moviegoers in Korea reached just over 300,000 over the last weekend, which is a 78 percent drop from the Aug. 8-9 figure, which saw the highest number of weekend audiences since the outbreak of the novel coronavirus in January.