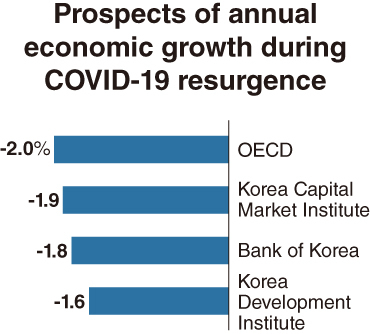 According to previously suggested scenarios by key global institutes and local think tanks, the country could see its economy contract as much as 2 percent.

Some market watchers and the central bank, however, also warned against excessive fear and pessimism, claiming that the latest turnouts will not be as extensive as the first global crisis earlier this year.

“(The economic growth outlook) will have to be lowered by a considerable level from the last suggestion,” said Bank of Korea Gov. Lee Ju-yeol at the National Assembly.

“As COVID-19 is showing signs of spreading once again here and the social distancing rules had to be reinforced, consumption will take negative impact.”

In its yearly economic outlook report in May, Seoul’s central bank had predicted that the economy will contract 0.2 percent this year, on the premise that the number of confirmed patients peaks and enters a downtrend during the second quarter.

It had also slashed the key policy rate to a fresh record low of 0.5 percent, adding to an earlier emergency rate cut in March.

With the latest epidemic development, however, speculations have been surging that the BOK may adjust its outlook to around minus 1 percent growth on-year. The central bank is slated to unveil its revised economic outlook and policy rate on Thursday.

While recognizing the seriousness of the situation, the top banker repeatedly warned against “excessive pessimism,” saying that the BOK’s analysis is based on “reasonable” outlooks.

One of the pessimistic scenarios for Asia’s fourth-largest economy was the outlook by the Organization for Economic Cooperation and Development.

The Paris-based organization suggested earlier this month that the Korean economy will contract 0.8 percent, improving from the 1.2 percent contraction suggested in June. As Korea was the only one among 37 member states to have its growth outlook raised from the June figure, the government saw the latest change as reflecting the country’s successful quarantine measures, crisis management capacities and the stimulus package titled “Korean New Deal.”

If a second epidemic wave breaks out globally, however, Korea’s growth will contract as much as 2 percent on-year, the OECD added.

Under such circumstances, the OECD outlook is to approach should be compared to that of the International Monetary Fund, which has all along claimed that the Korean economy will contract 2.1 percent this year.

Among local think tanks, Hyundai Research Institute on Sunday lowered its growth projection to minus 0.5 percent, down from the previous 0.3 percent.

“It is likely that the economy will face a W-shaped double dip, rather than the anticipated V-shaped or U-shaped rebound,” the institute said in a report.

But despite the latest aggravations, some market observers are of the opinion that the situation will not be as bad as in March-April when key economies adopted extensive lockdown policies.

“The ‘pessimistic scenario’ assumes that the virus has a second wave here and developed economies turn into a lockdown once again,” said Korea Capital Market Institute economist Kang Hyun-joo.

“As there are currently no signs of immediate shutdown measures, such an extreme scenario is not under consideration.”