The Galaxy Note 20 series unveiled about two weeks ago is definitely the easiest option for those approaching the end of their two-year mobile contracts with existing phones.

But despite initial market expectations, the hype appears to have died down quickly for the latest models, partly due to reduced subsidies for new phone purchases.

More significantly, potential consumers have pointed to “less-than-expected” innovations for the pricey device, which is to cost at least $999.

So far, according to the telecom industry as of Friday, preorders of the Galaxy Note 20 had been faring smoothly for the past week. But they fall short of the preordered volume for predecessor Galaxy Note 10, reaching 90 percent of the Note 10 preorders that recorded 1.3 million in total.

Some are seen turning instead to the Galaxy Note 10 or Galaxy S20 series that can be purchased for halved prices, but still have most of the innovative features and functions on the Note 20.

“Should I go for S20 or Note 20? I am not sure if this is true, but the Note 20 specs have been downgraded compared to the S20 series,” wrote Kim Jae-hyun, a 39-year-old employee who works in the finance industry, in a Facebook post.

Samsung has strategically set the retail price of the premium Note 20 Ultra edition at $1,299 -- with the Note 20 at $999 -- slightly lower than previous Galaxy Note devices. They seemingly aimed to prop up phone sales amid the global economic slowdown under the protracted COVID-19 impact.

To gauge how well the new models are equipped and how it pairs with the lowered price tag, The Korea Herald experienced the latest Note 20 Ultra edition and looked into the specs and features of the device over the last two weeks.

To begin with, kudos to Samsung for the S Pen.

The biggest wow factor was definitely the S Pen that felt much smoother and faster than the Note 10’s.

By cutting down latency to just 9 milliseconds thanks to the use of AI-based prediction for the stylus input, the writing experience with the new S Pen really felt like writing on paper with a real pen.

The Samsung Note app has also become extremely convenient by adding audio recording capabilities while jotting down notes. If users select a certain part of the notes for revision, that part of audio recorded during the note-taking is automatically played.

The first introduction of a matte bronze color to the Note 20 series is a selling point, but why the camera module on the rear has become bigger and thicker is puzzling.

Samsung accentuated the triple camera including the 108-megapixel wide-angle lens on the rear by making it larger and more protruding than any other phone. Ironically, the Galaxy S20 Ultra already features a quad camera, making this previous model more advanced. The Galaxy S20 Ultra, launched in February, sports the quad camera including a 108MP wide-angle lens, a 12MP ultrawide lens, a 48MP telephoto lens and a depth vision camera.

In the Galaxy Note 20 Ultra, the 48MP telephoto lens has been reduced to 12MP, and the depth vision camera is gone. The front selfie camera in the Note 20 Ultra is also downgraded to 10MP from 40MP in the Galaxy S20 Ultra.

The Note 20 Ultra also doesn’t feature the 100x Space Zoom feature that is present in the S20 Ultra.

Considering that the camera module accounts for a large portion of a smartphone’s price, the Note 20 Ultra’s cost seems understandable, at $100 cheaper than the S20 Ultra.

So, should this be considered a downgrade?

“It could be seen as having been downgraded because of the pixel number,” said an official from a camera module supplier. “But Samsung has optimized software for the camera, and the added laser sensor fills the void of the depth vision camera.”

The depth vision camera is also called a time of flight, or ToF, camera that can judge depth and distance of objects, and is used for the Live Focus video, Quick Measure and 3D Scanner features on the Galaxy S20+ and Galaxy S20 Ultra.

As there have been complaints of inaccuracy of the depth vision camera’s focusing function among users, Samsung seems to have replaced the part with a laser autofocus sensor that is cheaper and supports more accurate focusing in measuring short distances, according to the official.

“Rather than having the fourth depth vision camera that would be more useful when augmented reality programs become more popular, the Note 20 Ultra seems designed to be more pragmatic while keeping its premium status,” he said.

Considering the rumored specs of Apple’s iPhone 12 Pro Max, which would be the archrival of the Note 20 Ultra if it is released in September as planned, the comparison could become starker. 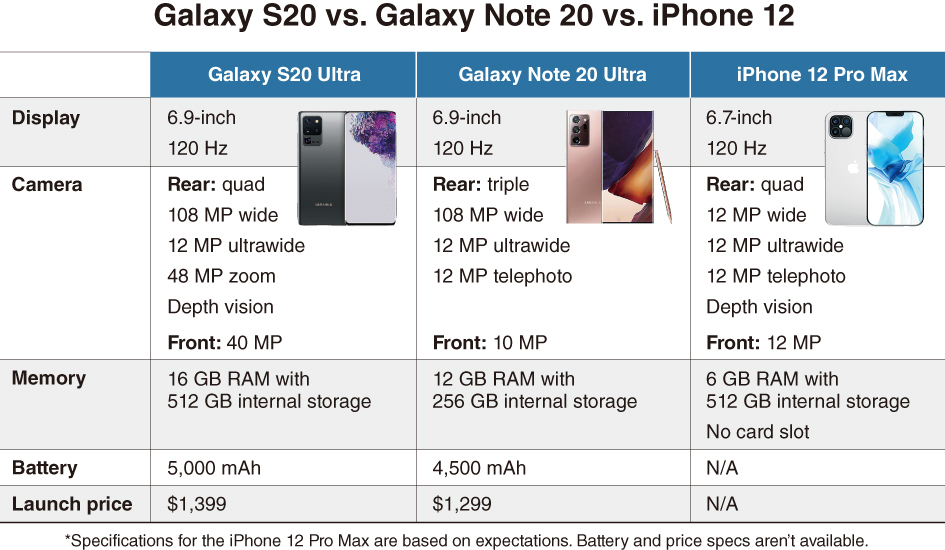 The predecessor iPhone 11 Pro Max retailed at $1,099, and the 12 edition is expected to have a slightly higher price tag. If so, it would have an edge over the $1,299 Galaxy Note 20 Ultra in price competitiveness.